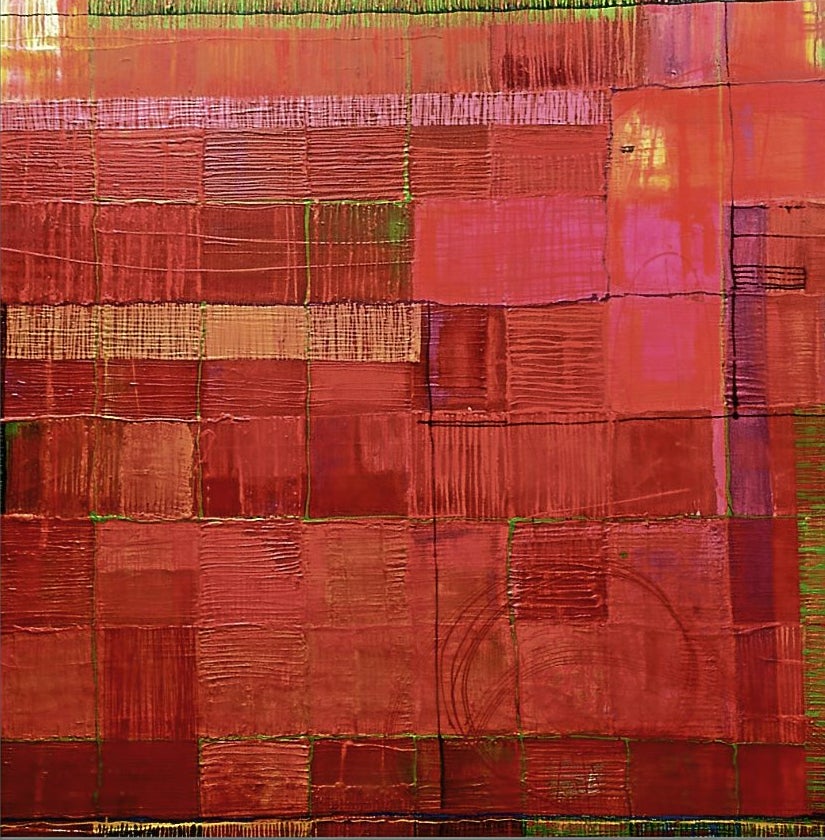 In “Hibla Series 5,” which opens on Dec. 8 at the Renaissance Gallery in SM Megamall, Jane Ebarle will again be an artist immersed in the resplendent colors of the native and the indigenousness yet one who is also constantly evolving her art.

But a different color scheme will define the collection. “It will all be happy colors, inspired by a happy heart,” she said.

Her time has been consumed mostly by her role as marketing executive of Faber-Castell in the Philippines. But it is unthinkable that her heart would stop beating for art. So she has always found time for painting.

Earlier in her career as an artist, she became an officer of the feminist artists group Kasibulan. She has joined the group exhibits of the National Commission for Culture and the Arts Gallery, Government Service Insurance System Museum and Cultural Center of the Philippines (CCP).

She also took time out to connect with her former classmates at the old College of Architecture and Fine Arts at the University of Santo Tomas, exhibiting with them at the UST Beato Angelico Gallery, UST Museum and University of the Philippines Vargas Museum.

In 2004, she was included in the list of 100 Women Artists during the CCP’s commemoration of the Centennial of the Feminist Movement of the Philippines.

In 2008, Ebarle had her first one-woman exhibit, “Filipino Ethnicity,” at the Philippine Heart Center Gallery. An ethnic art enthusiast, she infused elements of ethnic and tribal arts and crafts in her paintings.

“Our ethnic art across generations is interesting,” she said. “Every pattern brings an aura of mysticism that, looking at it, transports the viewer back to the past.”

The textile patterns have a primordial effect which never gets out of one’s system. The patterns, after all, are icons of past times, and Ebarle decided to incorporate them in her first show.

The result was exhilarating. It was a beautiful mingling of the archaic and the contemporary.

Her second exhibit, “Pinagmulan,” at the UST Museum in July 2009, focused on the ethnic art of the Maranaos.

This time, the process of creating fascinated her more, just as the results stunned her. Stunned, because she never thought she was capable of doing such things. It was as if an unseen hand guided her all throughout.

The experience of creating was ethereal as it was unfathomable. Accidental strokes floated around untamed. The colors were an interplay of control and wildness.

Her third solo was mounted at the Renaissance and started the “Hibla” series.

“Hibla” created itself. She never did the series on purpose, she said, even the art technique formed itself. There was no meaning or objectives attached to the paintings as everything was purely abstract.

After carefully selecting what name to label them with, she finally chose “Hibla” because the paintings resembled the intricacies of fibers.

Ebarle said she’s fascinated with  abstractionism because it deconstructs and weans the mind away being structural and too logical.

In 2010, Ebarle was invited to the 2nd WIEF’s Marketplace of Creative Arts at the Asian Civilizations Museum in Singapore. She participated in a panel discussion on art education. She raised the possibility of the business community not only supporting art, but making art as well.

When her paintings were exhibited in a complementary exhibition during the conference, she was pleased to learn that they were purchased by a former deputy prime minister of Malaysia and his friends.

Now in full throttle, Ebarle is already thinking of her sixth solo—to be held at the Philippine Center in New York in March 2013. In her next collection, she intends to capture the many wonderful imprints of the primitive textile designs that the indigenous communities have used across the centuries.

Ebarle’s simple dream of finding herself through her own art has predisposed her for a deeper involvement in it. As the marketing head of Faber-Castell in the Philippines, she is able to go to many parts in the country where she tries to augment the shortcomings in cultural education by immersing art educators in creativity workshops. There are now about 8,000 art teachers who have benefited from this program of Faber-Castell.

As past president of the Philippine Art Educator’s Association, she trained her leadership at helping enhance art education.

“Hibla 5” will open on Dec. 8 with cocktails at 6 p.m. Renaissance Gallery is at 4/L, SM Megamall, Mandaluyong City. Show will run until Dec. 18.