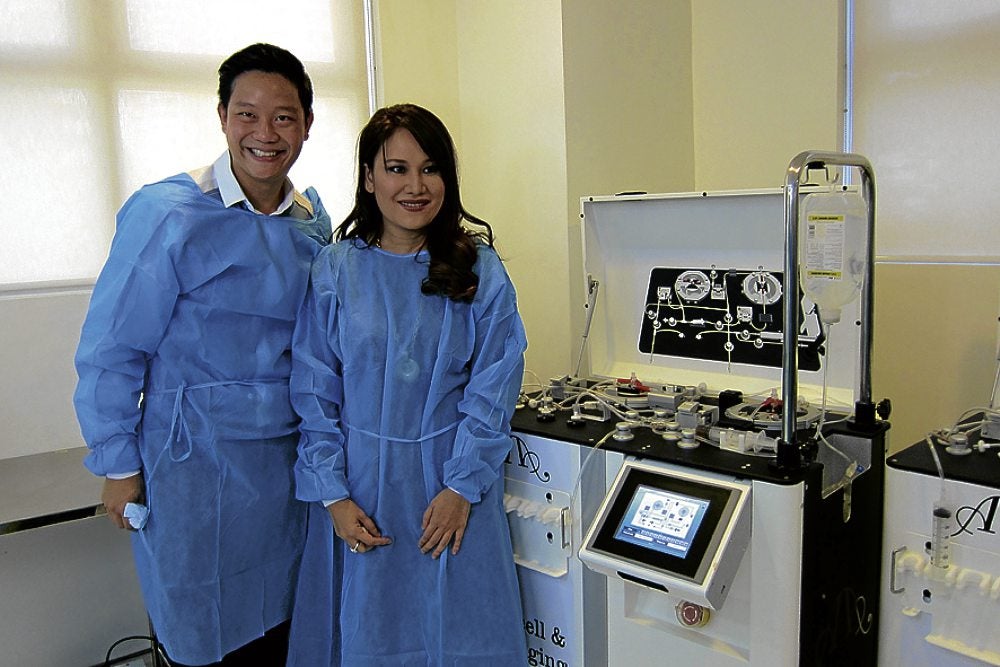 Your tummy fat can make you look young again

Believe it: That stubborn fat that has clung to your tummy like a barnacle on a crustacean’s shell? It has a purpose. And it’s not to keep you warm on a frigid winter day.

A clinic in the country has just introduced autologous fat stem cell therapy, or fat stem cell repair therapy (FSCR), a procedure that its proponents claim to have not only aesthetic, but also medical and wellness benefits. The treatment makes use of your own tummy fat.

FSCR is for anti-aging and skin rejuvenation, hair loss, and improved general health and even sexual function, according to Dr. Jung Kwang Seup, a South Korean-Brazilian plastic surgeon with a private practice in Seoul.

The treatment is also aimed at patients with diabetes, asthma, cardiovascular and neurodegenerative diseases, as well as those with hematological, liver and immune disorders, said Dr. Jung, who was in town as a guest of Dr. Aivee Aguilar-Teo and Dr. Z Teo of The Skin Laser and Aesthetic Center (www.aiveeaguilarteo.com; tel. nos. 4033245, 5562533, 8280197, 4031982).

Dr. Jung has been performing FSCR for eight years. FSCR, he said, may also benefit patients with autism.

The first step is the removal of  fat from a patient’s stomach through a mini lipo or lipo aspiration. The harvested fat is processed in a machine called an automatic stem cell isolation system. The fresh stem cell is then injected into the patient.

The fresh stem cell is intended to stimulate the patient’s body into producing new, healthy cells, to repair and rejuvenate the body’s tissues. The procedure takes two to three hours on an outpatient basis.

No risk for rejection

Fresh adult stem cells are typically harvested from one’s bone marrow, umbilical cord, blood or fat, Dr. Jung explained. Since it’s harvested from and injected into the same patient, there are no risks of rejection, unlike in the popular sheep stem cell therapy. It also doesn’t carry ethical issues, unlike the controversial embryonic stem cells, he stressed.

“We prefer fat because it’s easy to isolate from the body, and there’s a lot of stem cells in the fat,” said Dr. Aguilar-Teo, a dermatologist whose clinic pioneered the treatment here about six months ago. The umbilical cord typically produces less stem cell, and bone marrow tends to take more time to process and is, therefore, more expensive.

FSCR has been available abroad for at least eight years now, but it was only recently that everything has become automated: A state-of-the-art machine has been developed to ensure that the process is sterile, to avoid risk of contamination. If everything is done in the clinic, there’s also less risk of damaging the stem cells, which could happen if they are cultured in a lab and transported to and from the clinic.

In a recent demo at Dr. Aguilar-Teo’s clinic, a middle-aged female patient was put under twilight sedation in preparation for lipo aspiration. A minimum of 50 cc of fat is needed in one treatment. The amount is determined by the patient’s condition, and how much fat he or she has on his or her tummy or inner thigh, said Dr. Aguilar-Teo.

The quality of stem cell differs with every person. Age, state of health and lifestyle are key factors, said the dermatologist. (In other countries, patients are sometimes injected with the stem cell of their close blood kin when the patient, for instance, is too sick or too old.)

After one-and-a-half hours, the isolated stem cells—a syringe-full of pale-pink translucent liquid, derived from 200 cc of opaque, red-orange fat—were injected on the patient’s face and butt to achieve aesthetic goals. It was also injected in her joints—the patient was showing early signs of osteoarthritis, said Dr. Aguilar-Teo.

In some cases, a patient may request to have the stem cells injected in their genitalia for renewed sexual vigor.

“No matter where you inject it, it will spread all over the body,” Dr. Aguilar-Teo added. “It becomes part of the body, to stimulate the body to produce cells.”

In her clinic, they have performed full liposuction and FSCR at the same time on some patients, repurposing the fat removed from the patients’ bodies.

Dr. Aguilar-Teo’s husband, Dr. Z Teo, who was suffering from chronic knee pain that made him walk with a limp and unable to do any sport, underwent FSCR a year ago.

“If you’ve dealt with crippling pain every day, I can’t put into words how amazing the results were,” said the Singaporean doctor. “Since then, I’ve been playing tennis twice a week for two hours each time. And I’m running again. You see, if you take painkillers, and you ice and compress, you’re just getting rid of the symptoms; the problem is still there. The cartilage is finished. The point is to regrow your cartilage.”

As the person ages, the wear and tear on the body will require the patient to return for treatment “as soon as the symptoms come back,” said Dr. Teo. The frequency of treatment will depend on the patient’s need. “I haven’t had to do it in a year,” he said.

Dr. Aguilar-Teo clarified that “stem cell is not a cure and we don’t claim it to be a cure for any diseases… There’s no scientific proof, but we hope that it can also help chronic conditions. We can’t guarantee, but we can’t also discount that it could help.”

She stressed, “Stem cell is meant to repair. It aims to wake up latent cells to produce new ones. It’s meant to retard the aging process.”

A surgeon and an anesthesiologist are usually present during an FSCR procedure. Depending on the patient’s case, a dermatologist, an orthopedist or even a pediatrician may also be present.

There’s no age limit as to who may undergo FSCR, for as long as one has fat—on their tummy and in their bank account.

Dr. Aguilar-Teo declined to discuss the treatment’s cost, but based on rates for similar treatments abroad, good health and the fountain of youth certainly don’t come cheap.

“The good thing is that, you have use for your fat,” she said with a laugh. “So you shouldn’t feel bad.”