The Middle-earth magic is back | Inquirer Lifestyle ❮ ❯ 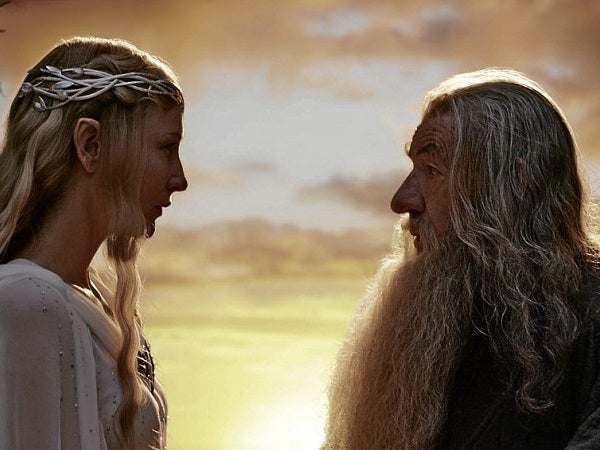 The Middle-earth magic is back

As unthinkable as it is, it has now been nearly a decade since moviegoers have visited JRR Tolkien’s fantastical Middle-earth, nine years since director Peter Jackson conquered this earth with—and received Oscars for—2003’s “The Lord of the Rings: The Return of the King.” Since then, the people in front of and behind the camera of enchantment have gone their separate ways, done different things, just like the epic’s fictional Fellowship.

But LOTR followers were delighted by the news that Tolkien’s first Middle-earth novel, that 1937 book “The Hobbit, or There and Back Again” would be adapted into two motion pictures by the same people who adapted the LOTR trilogy, except that this time, Jackson would take more of a supporting role and Guillermo del Toro would direct instead. When production delays forced del Toro off the project, Jackson once again assumed the role of steward of cinematic Middle-earth.

This shift in screen sorcerers proved to be an unusual challenge for Jackson, whose LOTR trilogy boasted such a rich, distinctive visual style, but had also burdened him with the expectation that everything he did next would be just as good. In films like the overloaded “King Kong” and the tragically winsome “The Lovely Bones,” Jackson was firing on all directorial cylinders but was not really focused, like he was searching for something just beyond his mind’s eye.

Whether he admits it or not, it seems that Jackson was searching for a way back to Middle-earth. “The Hobbit: An Unexpected Journey,” the first of what is now a Hobbit trilogy, showcases what makes Jackson such a great director. He certainly had help. “An Unexpected Journey” gathers anew many of the talented people who worked on LOTR, from screenwriters Fran Walsh and Philippa Boyens to composer Howard Shore and cinematographer Andrew Lesnie.

The resulting product is dazzling, and familiar at the same time. Jackson has again approached Tolkien’s material with an all-seeing eye to making it accessible to modern audiences. Sixty years before the events of the LOTR books, the wizard Gandalf the Grey (the wizened Ian McKellen) arrives at the Shire to recruit the homebody Hobbit named Bilbo Baggins (“Sherlock’s” frazzled Watson, Martin Freeman) for a quest beneath the Lonely Mountain. Accompanying them will be 13 raucous Dwarf warriors led by the regal Thorin Oakenshield (darkly heroic Richard Armitage from British TV’s “Spooks”). The other Dwarves are named Balin, Dwalin, Kili, Fili, Oin, Gloin, Nori, Dori, Ori Bifur, Bombur and Bofur (It’s just fun to say their names out loud).

The Hobbit trilogy will inevitably be quite different from the LOTR trilogy. While the LOTR films were essentially three books based on three movies, the Hobbit trilogy will instead be three movies based on a single book. As a result, the storytelling here is quite decompressed, with a single narrative thread instead of the dense parallel plotlines of the LOTR films. Instead of the epic struggle to save Middle-earth from ultimate evil, “An Unexpected Journey” focuses on 14 people going on a single quest for glory and riches, a more conventional movie structure that still runs almost three hours long.

That’s because, unlike its LOTR brethren, the Hobbit films won’t suffer any controversial streamlining, and instead “An Unexpected Journey” has all the little details from the book, including the songs. The companions encounter one danger after another as they are pursued by goblins, wargs and all sorts of fell creatures. We witness the kind of badassery that the otherwise overlooked Dwarves are capable of. The resulting adventure is action-packed and thrilling, and it is clear that this is merely the beginning. Moviegoers will leave waiting for the sequel, “The Hobbit: The Desolation of Smaug,” scheduled to wing its way to cinemas in December 2013.

Jackson’s enterprise is aided by the return of other actors, including McKellen, Hugo Weaving as elf lord Elrond and Cate Blanchett as Lady Galadriel. Galadriel doesn’t appear in the book, but Jackson and company have tied her and others into “The Hobbit” rather well, serving as another bridge for fans of the first trilogy. We will also see Saruman the White (Christopher Lee) before his corruption and see first-hand how Bilbo obtained what appeared to be  just another gold ring from the already mad Gollum (Andy Serkis in the role that made him a household horror). So many things just click into place for eagle-eyed Middle-earth fanatics as Jackson builds on the established Middle-earth mythology.

As the young Bilbo, Freeman shows how the bumbling can be both scared and stout-hearted, as he becomes a truly reluctant hero. The scene-stealing Serkis is amazing as his Gollum, younger but still unhinged, becomes much more realistic through the use of technology. Closeup, he is just plain unsettling. But the movie’s revelation is Armitage, who carries himself with a noble and haunted dignity as the prince seeking the return of a lost Dwarven kingdom.

When the company runs for it yet again and Shore’s score rises, it is clear that we have been successfully transported to Middle-earth as “An Unexpected Journey” throws some purposeful references and familiar settings to the first LOTR film, 2001’s “The Lord of the Rings: The Fellowship of the Ring,” a movie it resembles in spirit and structure.

In fact, “The Hobbit” turns out to be the perfect starting point for the few viewers who haven’t seen the LOTR trilogy, a movie that fully deserves to be part of the LOTR movie saga. Here is the start of a whole new adventure; indeed, the adventure that started it all. Peter Jackson’s “The Hobbit: An Unexpected Journey” is a wish come true, a polished and promising return to the Middle-earth we remember.