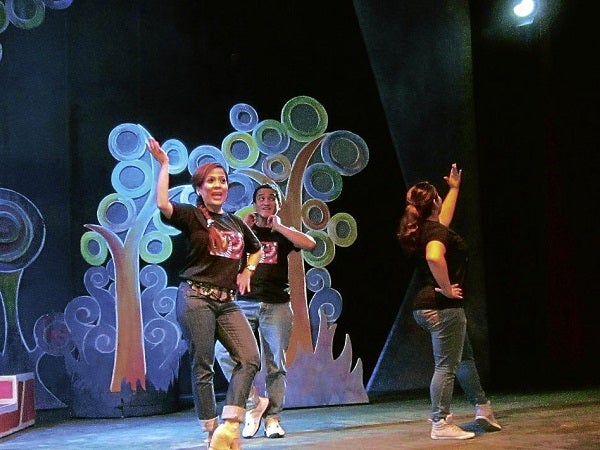 This question was posed to Repertory Philippines (Rep)  officers and performers: How do you feel about continuing criticism from certain quarters that Broadway-West End productions dominate the Philippine stage, and that this is a sign of “colonial mentality”?

“Tell that to the CCP (Cultural Center of the Philippines),” replied actor-director Audie Gemora. “That is all I have to say.”

Actress-singer Menchu Lauchengco-Yulo, associate artistic director of Rep (her tenure was cut short a few days ago, for still murky reasons—Ed.), had a less emotional evaluation: “The material is foreign, but the talent is Filipino. We showcase Filipino talent, so it is not colonial mentality.”

She added: “We are open to Filipino plays; we are not close-minded. But there is not enough material to fill a season.”

“Each company has its own vision,” noted actress-singer Joy Virata, founder of Rep’s Theater for Young Audiences. “Our vision is English theater. Other companies have a vision that is Philippine theater. They do Filipino plays, so it balances out.”

Actress Juno Henares, who was program host, observed that Rep has done Filipino plays like “Miong,” a musical about Emilio Aguinaldo, with libretto by Virata, as well as Filipino adaptations of Western plays. (Also Nick Joaquin’s “A Portrait of the Artist as Filipino,” one might add.)

“We want to do more adaptations so as to broaden our audience,” she added, pointing out that Rep recently coproduced “Care Divas,” a hit play of Peta (the Philippine Educational Theater Association).

This flurry of views and reactions took place during a recent press conference at OnStage, Glorietta I, Makati City, which announced Rep’s lineup of shows in 2013, in celebration of its 75th theater season. The company’s big musical for this year, “Disney’s Camp Rock: the Musical” (ongoing until Dec. 16), serves as appetizer.

The five plays for next year are: “Boeing Boeing” (three weekends starting Feb. 1) starring Michael de Mesa, in his Repertory debut, and Michael Williams, with direction by Miguel Faustmann; “No Way to Treat a Lady,” (March 1) starring Michael Williams and Carla Guevara, directed by Lauchengco-Yulo; “The Graduate,” (April 5) starring Cherie Gil, Reb Atadero and Cara Barredo, with direction by Jaime del Mundo ( “strictly for adults only”); “Alice in Wonderland” (Aug. 17) directed by Joy Virata; and the big musical, “The Producers” (Nov. 15) directed by Lauchengco-Yulo and del Mundo.

“Boeing Boeing” is a wacky sex comedy about a playboy who has three girlfriends, all stewardesses and of different nationalities. When the flights of the girls are cancelled, they converge on the apartment of their lover, and bedlam ensues.

“No Way to Treat a Lady” is a musical comedy about— would you believe—a serial killer. “The Graduate” is the stage version of the iconic film that starred Anne Bancroft as the seductive Mrs. Robinson and Dustin Hoffman as the naïve young man. (“Mrs. Robinson, are you trying to seduce me?”).

“Alice in Wonderland” is a musical adaptation of the famous classic by Lewis Carroll. And “The Producers” is that musical which was, unexpectedly, such a hit on Broadway, winning a record 12 Tony Awards. The musical later became a movie.

A preview of things to come in 2013 whetted one’s appetite for the forthcoming productions, as the talents present gave readings of each play. Topper Fabregas pinchhit for the absent Atadero as Benjamin while Lauchengco-Yulo substituted for Cherie Gil (who was abroad) as Mrs. Robinson. And so on.

Enlivening the program were production numbers from “Camp Rock,” with a gaggle of dancing youngsters, and “Alice in Wonderland,” with Rep mainstays Liesl Batucan and Rem Zamora leading the young cast.

Gemora, who directed the Disney musical, said that to prepare himself for the production, he recited a mantra: “Think young! Think young!”