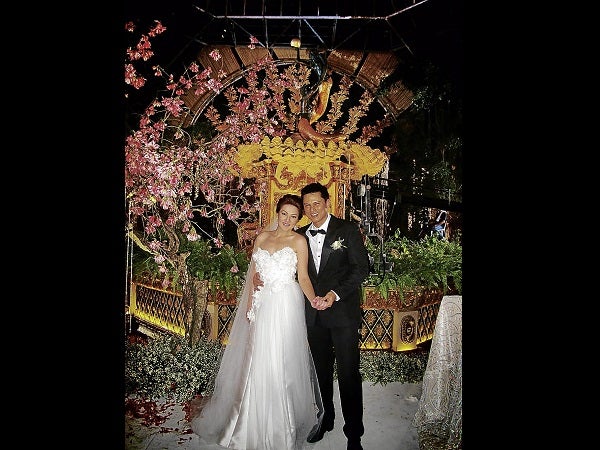 When I got a text from Tita Dolor Guevarra that I should keep Nov. 15 free around 4 p.m., I presumed it was a shoot for a new campaign or endorsement. I inquired who the model was and what the shoot was for. I got an enigmatic reply, simply saying I should not miss this special day, and we should call this “Happy Ever After.”

I left it as it was—just a project. But as the days got closer, I had a light bulb moment and called her to verify my suspicions. She merely answered, “Who told you?” and that was enough confirmation for me.

Nov. 15 came and I had to go to a magazine shoot all the way to Sta. Rosa. I was afraid that my shoot might drag longer than expected. But thanks to the ever-reliable actor I was shooting at that time, we ended early and I hurriedly changed to my formal outfit and headed for Fernbrook.

As I approached the venue, I saw the exterior dotted with OB vans of ABS-CBN and I thought, this was really going to happen. Boy, would she be crying her heart out.

Yes, this was the day Zoren would propose to Carmina and, at the same time, marry her! The mere thought brought tears to my eyes. I have known and shot Carmina Villaroel since she was a kid. Even now, she would often request me for her shoots, because of the years we have shared in the business. I think it’s safe to assume that we have grown to be friends, hence the reason I was invited to this wedding, with a few of the special people in her life.

I entered the venue and I found people glued to the monitors dotting the holding area. The scenario was, this was supposed to be a TV commercial shoot, and everyone was being prepped for a formal scene in the commercial. Zoren had planned it so that something would go wrong with the production and then a flash mob would ensue to guide Carmina to the venue proper.

As we watched the monitor, it was like watching “Big Brother,” with Carmina completely oblivious to the whole event unfolding.

In the holding room with me were Tita Dolor Guevarra, Shirley Kuan and Susan Roces. In a few minutes, Kris Aquino, Ben Chan and Eric Quizon entered. I found out that they were part of the principal sponsors. And the original barkada was present: Gelli de Belen, Candy Pangilinan and Aiko Melendez. The guests kept coming in: Tirso Cruz III with wife Lynn, Amy Austria, Joey Marquez, Maricel Soriano and Boy Abunda, to name a few more.

Then the tension in the room started when we heard Zoren getting angry at the production in the dressing room where Carmina was being made up. This was the signal to everyone that he was about to propose. Everybody was enjoying Carmina’s reaction through the hidden cameras in the room during the whole so-called fracas.

She calmly told Zoren to settle things nicely with the production. If an award was to be given that night, it was for Zoren. He was nervous like anything, and yet, he managed to act according to plan.

The assistant director Zoren was supposedly fighting with then returned to the dressing room and apologized to Carmina, saying, “I am sorry and I saw the sign.” In response, everybody in the room shouted, “I saw the sign!” and the dancers begun to dance. Now the confused Carmina, true to her nature, started panicking and wondering what was happening.

She was then guided outside to meet Zoren, who sang a song and then proposed to her under the thousand lights that dropped from the cherry blossom trees. At this point, Gelli, Candy and Aiko were sharing tissue paper to wipe the tears of joy that welled up in their eyes.

Zoren was the perfect Prince Charming and Carmina the perfect princess who waited for this “ever after” moment.

Needless to say, we, too, were all crying behind the huge white curtains that hid us and the altar where Carmina and Zoren would exchange vows. Boy Abunda introduced the principal sponsors to the still shocked Carmina. She was speechless and in tears. The huge white curtains parted to reveal family and friends waiting for her to walk down the aisle.

If only words can describe how we all felt at that moment! But we were all in tears.

You know how they say that the bride is always beautiful on her wedding day? Carmina wasn’t like that. She was more than beautiful, more than glowing. Despite the tears that flowed, she was the most beautiful person in the room. She was a true picture of happiness. We all envied her.

She has a very handsome Prince Charming who has always been there for her. She has two beautiful children who love her very much. And now, she finally got what she always wanted. We all wanted to be her at this moment.

A lady justice officiated the ceremony, and when it was time for the groom to kiss the bride, we all went crazy and shouted for joy. I wanted that first kiss of Mr. and Mrs. Zoren Legaspi recorded, so I fought to catch the moment.

I “instagramed” it, I tweeted it and God knows where else I posted it. As she walked down the aisle in her Paul Cabral gown, fireworks lit up the skies as if the heavens were celebrating the union, too.

Romance is not dead. Dreams do come true, and as much as I hate to say it to myself, fairy tales are still alive. I think all we have to do is wish and work for it to come true. I know, because I’ve borne witness to it.

To Carmina and Zoren, thank you for making dreams come true. That means we mortals still have a chance.