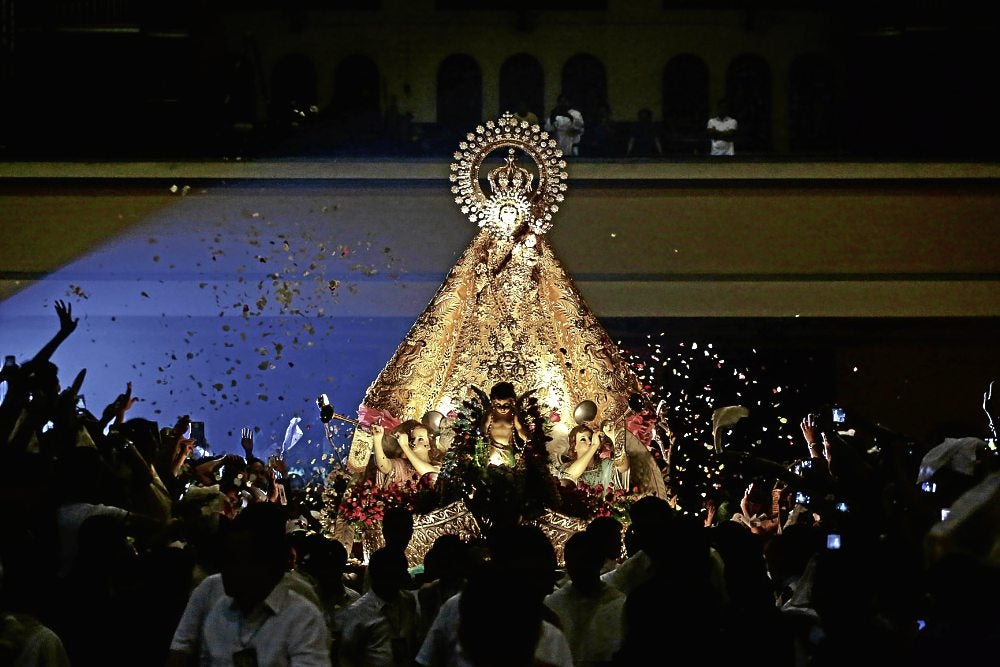 On the occasion of the formal installation of the National Cultural Treasure marker at Sto. Domingo Church, a group of young photographers is mounting “La Naval, Mother of Faith” at the Museo de Sto. Domingo, which runs Dec. 14-Jan. 31.

Composed of 54 frames capturing the various facets of devotion to the Nuestra Señora del Santisimo Rosario, La Naval de Manila, and of her shrine at the Quezon City church, it is the first exhibition of Fotomasino, the official guild of photogaphers of the University of Santo Tomas founded by award-winning lensman Paul Allyson Quiambao.

According to organizers, the project is to provide people a glimpse of the reasons behind the declaration of Sto. Domingo Church, including the National Shrine of Our Lady of the Rosary, La Naval de Manila, as a National Cultural Treasure by the National Museum.

“We want to raise awareness on why the declaration of the Sto. Domingo Church is fitting for such an institution,” said Marc Henrich Go, Fotomasino president and a Hall of Famer in the Art Petron competition. “We tried to capture the cultural, historical and architectural dimensions of the church for this exhibition.”

According to Fr. Christopher Jeffrey Aytona, OP, assistant director of the Dominican Province of the Philippines-Institute of Preaching, Fotomasino’s exhibition is also in line with the preaching ministry of the Dominicans, who have promoted the devotion to the Blessed Mother by means of the Holy Rosary; hence, the title Our Lady of the Rosary.

“Preaching is no longer limited to the pulpit,” Aytona said. “We need to develop more creative ways to preach the Gospel by utilizing the modern means of communications, such as photography.”

“We (the Dominicans) support and encourage young people who are into photography to use their talents and skills to good purpose like this one,” he added.

The National Museum of the Philippines declared last Oct. 4 the Sto. Domingo Church and its religious objects as National Cultural Treasures by virtue of the church’s cultural and historical significance, especially since the miraculous image of Our Lady of La Naval de Manila, which has drawn strong devotion from Filipinos for almost four centuries, is housed in the structure.

La Naval de Manila alludes to the epic naval encounters in the 17th century between the heavily armed Dutch marauders and the poorly outfitted Spanish and Filipino defenders. Miraculously, the defenders won after praying desperately to the Virgen del Santo Rosario. Hence, after the victory, they attributed the triumph to the intercession of the Blessed Mother.

Coinciding with the official installation of the National Cultural Treasure marker was the blessing and inauguration of the restored 77-year-old pipe organ of the Sto. Domingo Church, presided over by Fr. Gerard Francisco Timoner III, OP.

The musical masterpiece accompanied again the renowned Tiples de Sto. Domingo, who sang the repertory of La Naval along with the Sto. Domingo Male Chorale, UST Liturgicon, and the students and faculty members of the UST Conservatory of Music.

The Dominicans transferred the pipe organ from Hong Kong to the Sto. Domingo Church in 1954 after the Chapel of St. Albert the Great’s Priory, the center of religious formation and studies of the Dominican Province of the Holy Rosary, closed. The instrument was made in Rosaryhill on Nov. 24, 1935.

Previously, Filipino Dominicans were part of the Holy Rosary Province, the original missionary province in Asia founded by the Spanish Dominicans after they reached the Philippines in 1587.

Filipino Dominicans administer a number of convents and houses (two of them in Indonesia and Sri Lanka), formation houses, a center of studies, educational institutions, parishes, missions, shrines  and retreat centers.

A testament to the Dominican Province of the Philippines’ (DPP) commitment to the order’s mission of preaching and scholarship is the Institute of Preaching established in 2005, which offers graduate studies in homiletics. It is located inside the Sto. Domingo Church compound in Quezon City.

The indigenous province of the Order of Preachers was founded on Dec. 8, 1971.