Monique Wilson speaks up vs violence against women | Inquirer Lifestyle 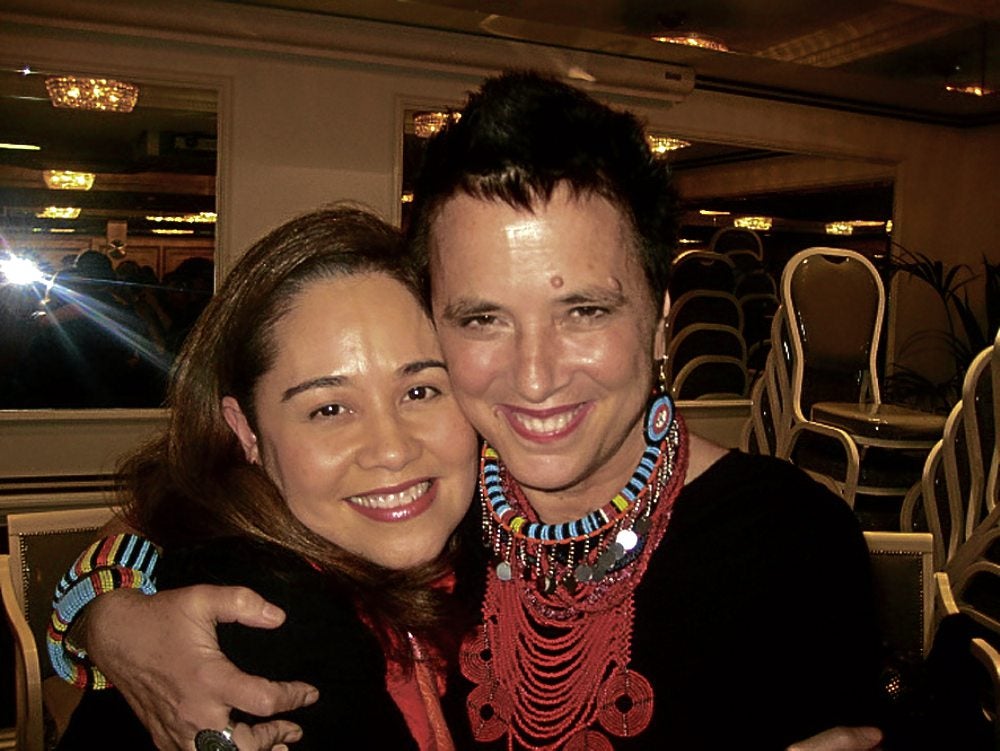 Monique Wilson speaks up vs violence against women

Monique Wilson is finally out and proud. The woman behind New Voice Company, the theater group behind such hit productions as “The Vagina Monologues,” “Angels in America,” and “Rent,” has finally declared she is gay.

At the press conference of One Billion Rising, a global initiative to end violence against women launched by “The Vagina Monologues” author Eve Ensler, Wilson pooh-poohed insinuations she was using the issue to drum up interest for the campaign.

“I’ve always thought people knew about it,” Wilson said candidly to media. “But then, nobody really asked me about it. I wasn’t planning on calling a press conference just to announce to people that I am gay. That’s so dyahe naman. Let’s not divert the press con from One Billion Rising, which is something that I truly believe in.”

“I guess I was just lucky in life. I’m very grateful for my family who has always been supportive of me. In my outreach with Gabriela around the countryside, I realized that I am so much luckier than 80 percent of the women that I got to meet. I am now 42, and I think it is time that I give back now. I realized that I shouldn’t make myself useful when I’m 70. I should make myself available to others now. It is indecent if we just let the violence happen to all these women. It is time that we rise and speak against it.”

Ensler started the One Billion Rising campaign last  September  in response to the “legitimate rape” and pregnancy controversy sparked by a comment by US Republican Representative Todd Akin of Missouri.

The campaign calls for one-billion women around the world to walk away from their homes, businesses and jobs, and join together to dance in a show of collective strength on Feb. 14, 2013.

The event will coincide with the 15th anniversary of the V-Day Movement, which was in turn inspired by Ensler’s play. In the Philippines, Wilson is acting as spokesperson for this initiative.

The Center for Women’s Resources says the number of cases of violence against women rose by 47.7 percent from the documented 18,242 cases in 2009, to 26,951 cases in 2010. It adds that of the 4,572 cases of rape documented by the Women and Children’s Protection Center of the Philippine National Police, 19 were incestuous or perpetuated by a blood relative. The total shows a 13-percent increase from 4,048 cases documented by the PNP in 2009.

“I’ve seen so many teenagers who lack the courage to speak up against the violence done to them, who lack the self-esteem and are victimized daily,” said Wilson. “If by coming out I can serve as a positive role model for them, then this has been all worth it.”

Wilson was a veteran theater actor in the country before she went to London in 1989 for “Miss Saigon.” Following her stint in its London production, she returned to the Philippines to start her own theater company, New Voice.

Wilson said she considered her sexual orientation not to be an issue because it was a non-issue in the theater.

“I’ve worked with Repertory Philippines since I was young, and it simply did not matter to anyone in the company,” she said. “It was an open culture there.”

She only admitted to herself that she was gay when she was 18. By then, she was already in London in “Miss Saigon.” She said Lea Salonga, who played Kim in the musical, knew about it, too.

“I thought everybody knew about it already when I came back,” she explained. “Wasn’t it obvious from all the kinds of plays we were doing? I was just happy that the media never made it an issue. By giving me that space, I was able to focus on my work in the theater. I’ve always believed that my work in the theater was so much more important than my personal life.”

She has been living with her partner, a Filipina based in London, for the past 14 years. They formally availed of civil partnership in London two years ago. The partnership gives them full civil rights, the same rights a heterosexual couple receives when they get married.

“In London, our partnership is legally accepted,” she said. “It’s really no big deal.”

Apart from her sexual orientation, Wilson admitted to be battling cancer. She was diagnosed with a rare type of cancer of the blood two years ago. She is under strict medication to control the disease from progressing into acute leukemia.

“If there is anything I am now grateful for, it is the fact that I wake up every day with the energy to do the things that I believe in,” she said. “That is more important to me now than anything else.”

Wilson is enjoining the public interested in supporting One Billion Rising to go to Liwasang Bonifacio on Nov. 30 for the filming of an MTV on the campaign. The video, using an original Filipino composition, “Isang Bilyong Babaeng Babangon,” will be presented to Ensler during her Manila visit.