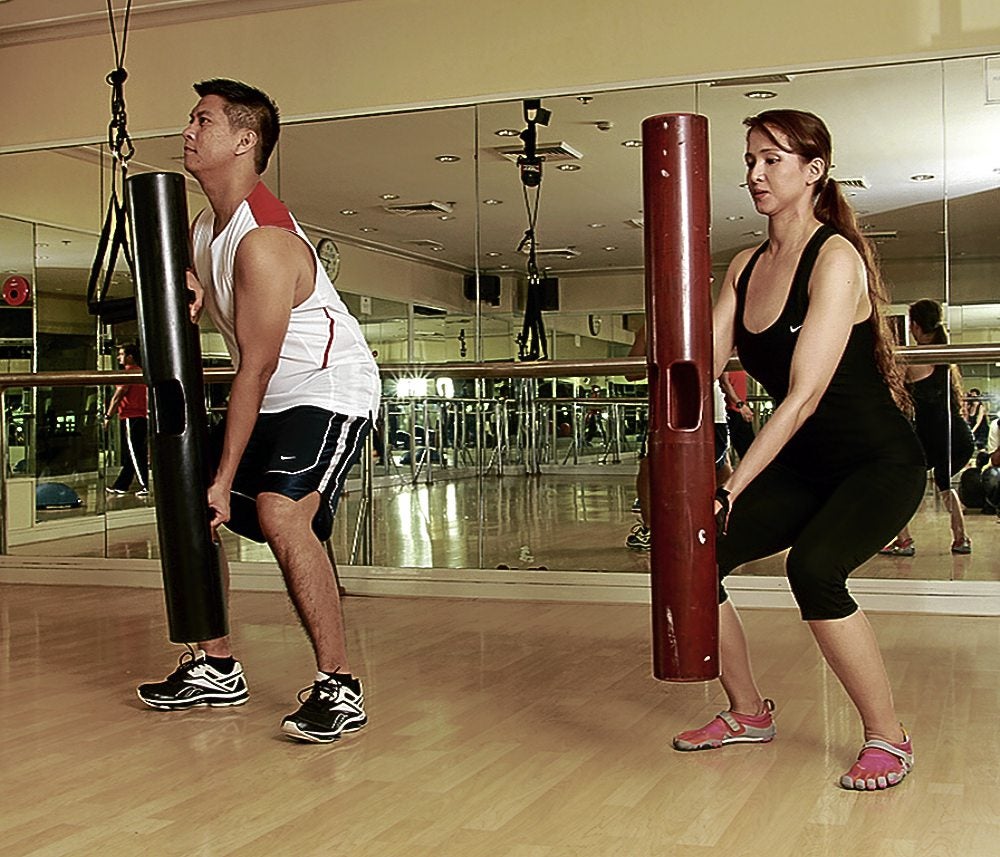 GERALD and Citadel Cruz use the ViPR, which provides constantly moving resistance to train specific movements. PHOTOS BY NELSON MATAWARAN

Alex Cabagnot of Petron Blaze Boosters is touted as one of the best point guards around. Despite doing the mandatory weight-resistance training for professional basketball players, he felt he could still up his ante.

When he met personal trainer Jonnel Cruz, at the Edsa Shangri-La Health Club, the athlete asked how he could get sculpted abs. Cruz gave a few tips and advised him to load up on tubers four hours before the game and to get his protein from fish.

Eventually, Cruz started watching Cabagnot during his games. Cruz noted that the athlete was gifted with quick reflexes and agility. However, he noticed that Cabagnot could still reach his maximum potential if he strengthened his core (the muscles around the abdomen and spine) and worked on the smaller muscles that supported the big muscles. He also observed that when Cabagnot took on an athletic stance (the basic crouch position for launching a movement), the placement of weight and alignment of the knees were wrong. Over time, these bad habits could pile up and lead to injuries.

Founder of the fitness company iFit Pro Unlimited, Cruz has several certifications from such organizations as the Gray Institute Foundation of Movement Certification in the States, the International Kettlebell Federation and Asia Fitness. He takes a thorough method reconditioning his clients so they can look good and also work at their best.

“Core training helps improve the center part of the body so that it can perform better as one unit,” says Cruz.

For Cabagnot, Cruz designed a conditioning and injury prevention program.

“His workout provides the type of movement and balance needed to excel in competition,” Cruz explains.

Cabagnot’s program includes suspension workout and the Bosu  (acronym for Both Sides Utilized) balance trainer, a dome-shaped device that challenges the body’s stability.

For strength training, Cruz uses CrossCore, a brand of suspension equipment made of a pair of straps with handles and a rotating bracket connected by clasps. It could be hooked anywhere there’s an anchoring source. One just places his feet in stirrups to suspend them off the ground, then performs exercises such as pushups, or one can lean back while grasping the straps to flex the arms or twist from the torso.

“Any move that a basketball player does on the court involves the whole body,” says Cruz.

Hence, the CrossCore is ideal because it includes rotational movement to all the body weight-training exercises which enables the user to have a wider range of motion. Since it is designed to get shaky when used, it stimulates the nervous system and compels the muscles to work harder. Cabagnot says the instability of the suspension straps forces him to engage his core.

After the suspension training, Cabagnot feels he’s had a total body workout. He has exhausted his body from shoulders to calves just using his 178 lbs. It also trains him to use his core and torso for a layup and pull-up for more power and not just his arms and legs.

With the Bosu ball, Cabagnot practices jump routines in different directions and other explosive and ballistic (fast) movements to prepare him for defense on court. “I feel stronger on the court. You don’t get bigger, you get leaner. It’s good to be light and strong,” he says.

Functional training can also be designed for nonathletes whose goal is keeping fit. Citadel Cruz, a mother of three, was skinny. Although she was pumping iron, she wasn’t getting any results. On the other hand, Gerald was out of shape.

Jonnel gave them a thorough program that consists of suspension workout, ViPR (Vitality, Performance and Reconditioning or strength training with a rubberized pipe) and kettlebell (a cast ironball with handles). Both workouts entail lifting and swinging an apparatus while moving the body in all directions.

Citadel credits the program for leaner muscles and increased strength in the muscles around her waistline. Her husband is pleased with her bikini body. Gerald adds that doing the suspension workout improved his flexibility.

He cites the advantage of working out with his wife. “I don’t get lazy. My wife motivates me. I follow her because she’s more fit. I’m encouraged to work out because of her.”

Jonnel explains, “For couples, functional training can enhance a marriage because it enhances the quality of life. Functional training expands the individual’s ability to perform daily activities. Since more muscles are used, more calories are burned. It also saves time because you’re working on several muscles all at once. Money is saved because you don’t need fancy equipment. You can even do your workouts at home.”