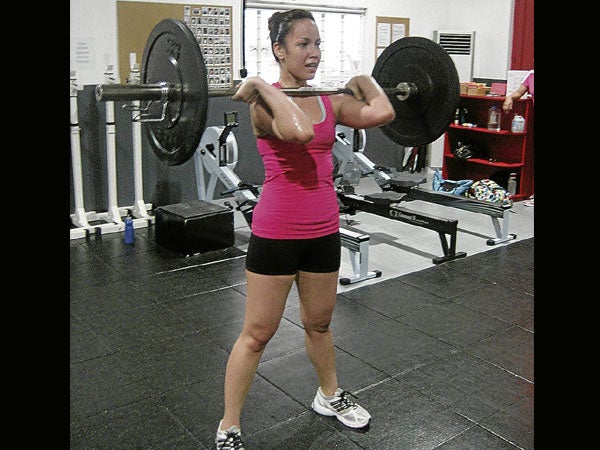 It’s a different workout every day 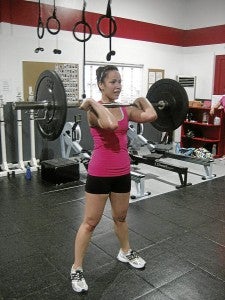 Doing my research on CrossFit, my eyes nearly popped out of their sockets as I saw images of women with hardcore abs lifting heavy weights. At 5’3” and with a petite frame, I was mortified as the day of my workout loomed. But a picture doesn’t necessarily paint the right words.

Contrary to what the online images showed, while CrossFit puts a premium on improving strength and fitness, and in the process, toning your body and making you lose inches, “it’s a wrong notion that you will bulk up, as my body type’s still thin and feminine,” says Christine Ferrera, a 35-year-old CPA and entrepreneur, who joined the CrossFit workouts at Ultra last December, even before the gym opened.

Unless you’re taking steroids and doing bodybuilding workouts specifically designed to increase the size of your muscles, or you have a different genetic makeup, it is almost impossible to build muscles like a man’s.

“Women won’t look like the Hulk from lifting the weights. We can guarantee that,” says Miguel Dy Buncio, progenitor of CrossFit Manila, which opened last February.

Dy Buncio stumbled upon CrossFit when he was supposed to take a kickboxing class abroad, only to find out that it was filled with women. With a laugh, he says, ” I told the trainer that it wasn’t for me. So he showed me CrossFit.

“When I decided to come home, the first thing in my head was to bring CrossFit to Manila,” adds Dy Buncio.

From couch potatoes to seasoned athletes

One quick survey of the gym showed that CrossFit was a no-nonsense gym. As Bamm Aquino, a 35-year-old mom and part-time contractor, puts it, “The first time I went in for a trial workout I really didn’t know what to expect. They had rings hanging from the ceiling, a bar that extended from one wall to the other, wooden crates and so on.”

As Aquino searched for CrossFit on Google after her first workout, she found an excuse as to why she struggled then. It was defined as a “strength and conditioning program for…tactical operations teams, military special operations units…and hundreds of professional athletes worldwide.”

But she proved that description could also apply to a simple mother of two. “If I can do it, anybody can,” says Aquino. She’s been doing CrossFit for four months—and counting.

As CrossFit, originally developed by legendary coach Greg Glassman, is an elite fitness workout for everyone—from couch potatoes to seasoned athletes—the workouts are the same for everyone, although they can be adjusted.

“We scale it to your level. So if there’s a triathlete, a basketball player, and a mother, they all do the same workout, but at different levels of load and intensity,” adds Dy Buncio.

“There’s a different workout every day, so working out is never boring and always challenging,” notes Erin Campos, a 30-year-old freelance consultant who’s been doing CrossFit for five months, and tries to work out five times a week.

“Every Workout of the Day (WOD) is challenging. It makes me feel like I’ve accomplished something great every day. The mental toughness that allows you to finish the workouts is something you carry to real-life situations,” adds Campos.

Aside from the physical and mental benefits, CrossFit also motivates you to make certain lifestyle changes. “I knew that to improve or even just get through a workout without feeling like death afterward, I would have to make some serious changes. So I quit smoking, improved my eating habits, and focused on getting a good night’s rest,” Dy Buncio says.

Even for the busiest schedules

With any sport comes discipline. As Dy Buncio notes, there is a consequence for those who are late, and everyone’s encouraged to be punctual.

“It really helped me to commit myself to it and be on time,” says Bing Reyes, a 28-year-old marketing manager for a pharmaceutical company and a club DJ.

She adds, “It’s an unusual gym. There are no mirrors, free beverages, TVs, DVD players, saunas and steam baths. So now I go to the gym to focus on my workout and not to watch TV.”

“You won’t get pampered at CrossFit. You’ll be pushed to be at your best,” says Ferrera.

Another advantage is the time element, as each session rarely takes more than 30 minutes (usually equivalent to an hour on the treadmill), so anyone can fit it into even the busiest schedules.

“It’s holistic since we’re not just focusing on one aspect,” says Dy Buncio.

“Yes, it is intense. That’s something I won’t deny. But it will get you results,” says Dy Buncio. We’ll walk you through it. We don’t expect you to lift an elephant. We’ll make you strong.”

“I’ve been a gym rat for years but I haven’t experienced workouts with the same intensity as CrossFit,” says Ann Uy, a 32-year-old mother who works out at least five times a week. “It took me three days to recover from the soreness when I first tried it. But now, I can work out three to four days straight.” 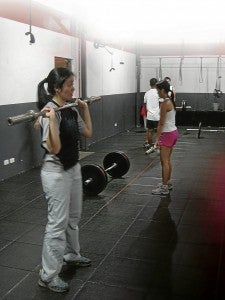 Dy Buncio also points out that a common mistake of some athletes such as runners is that “they focus only on running, but they haven’t really conditioned themselves.”

“I finished several marathons and ultra marathons before I joined CrossFit. I thought I’d already exploited my endurance, only to find out that I have a huge gap in my fitness level,” says Ferrera.

As CrossFit can complement your sport-specific regime, Ferrera notes, “it really focuses on overall fitness, and I can feel myself stronger now. I’m a runner, it strengthened my core that sustained me during the 14-hour pounding on the road at the Bataan Death March 102km Ultra Marathon last March 2011.”

“It’s sustainable and you won’t get bored. You’ll have a support community that’s passionate about CrossFit so you’ll push yourself every time,” says Dy Buncio.

But the beauty of CrossFit is that “it’s not only sustainable, but also adaptable. If there’s a new fitness workout, it’s very easy to incorporate if it fits into CrossFit’s philosophy.”

The fact that I had said goodbye to my days as an athlete a long time ago, coupled with years of smoking, meant that my workout session was scaled down—way down—to my fitness level. Surprisingly, though, I survived.

It’s a workout that will definitely shake you to your very core—in a good way. True to CrossFit’s philosophy, “It’s not your ordinary gym nor is it your ordinary workout, but it is for ordinary people looking for extraordinary results.”