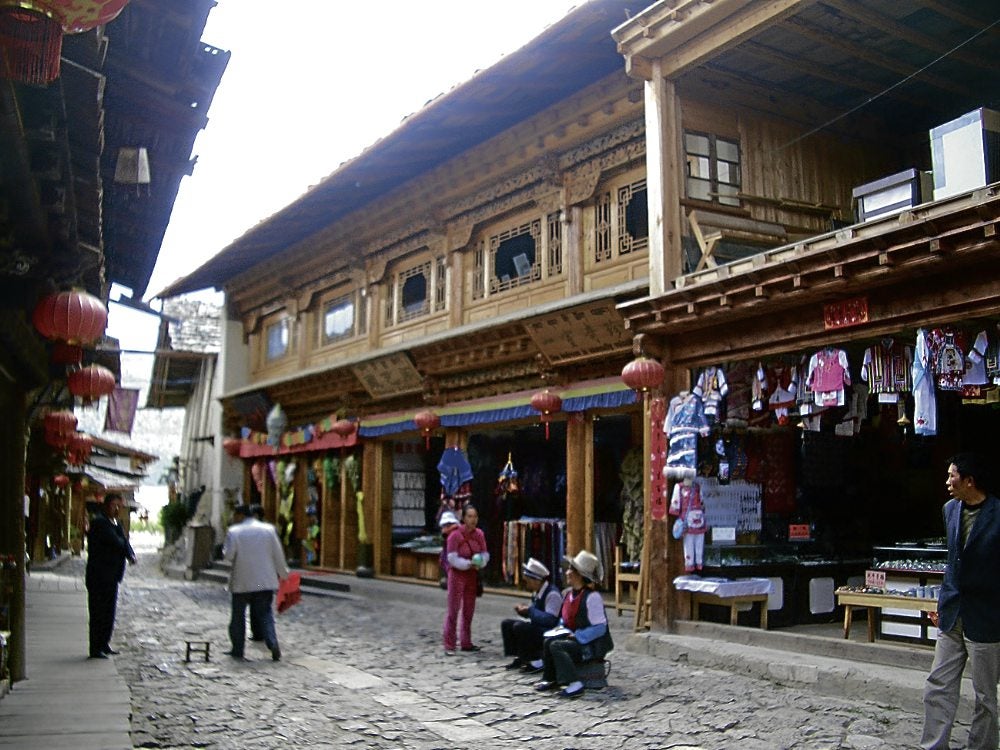 A STREET bustling with new businesses for new travelers

Aside from the famous Silk Road, there was another lesser known network of paths used by what is now called the Tea Horse Trade. This Trade involved the ancient exchange between China and Tibet, with tea coming from the former and horses from the latter.

The Tibetans were in great need of the bricks of dried leaves produced by their gigantic neighbor. For tea brewed with butter was one of the most important sources of nutrients for the peoples of the harsh lands at the Roof of the World.

Meanwhile, the sturdy ponies of the Himalayas were important as breeding stock for the equine mounts of the vast armies of the Celestial Empire. For centuries, animals and porters bearing enormous loads had been negotiating perilous trails hidden by mountains, quietly carrying on the commerce that was so essential for the governance of a huge sector of humanity.

Of course, unbidden, other things would travel down the roads as well: ideas and insights as well as pests and plagues. What legends accompanied the caravans, what tales were woven to fill the hours or to make sense of the puzzles confronted along the way?

One end of the Tea Horse Road or Chamadao originated in the Chinese province of Yunnan where, some claim, tea itself was first cultivated. The other branches reach Tibet and then, further on, the torrid plains of India.

One summer, I was contracted to evaluate a proposal for the setting up of a museum to commemorate this incredible encounter of peoples. As part of this evaluation, I would have to explore the Eastern Sector of the Road to understand the context from which the museum arose.

So it was that I found myself in the Yunnan town of Zhongdian. I was quite nervous about the possible effects on my health as the area had an elevation of 11,000 ft. This was considerably higher than Mount Apo itself, higher than any patch of earth to which my coastal self was accustomed.

I took comfort in the information from an Internet site which brightly observed that “altitude sickness” rarely hit on the first day. Furthermore, it was no indication of one’s fitness level since it cropped up arbitrarily, making no distinctions between slovenly couch potatoes or perky gym bunnies.

My first task was to interview Mr. He Qiang and Mr. He Gang, brothers who were the museum’s main proponents. I was brought to the brothers’ home by Ms Renzeng Cuomu, a young woman who acted as my interpreter. She worked with the local chapter of the Mountain Institute, an international nongovernment organization which runs ecological programs.

Mr. He Qiang explained to me that he was a member of the Ma Clan of enterprising merchants who originally came from faraway Xian, the grand former capital of the Tang Dynasty. His grandfather had been one of the most illustrious pillars of the Tea Horse Trade.

A prosperous man, he had kept homes in Lijiang, Zhongdian, Lhasa, and even India. In each of these places, he contributed to the local community, donating to temples and schools.

In Old Man Ma’s honor, his grandson wanted to set up a museum which not only showcased the life of such an accomplished individual, but also celebrated this especially vibrant and unique cultural intercourse between the Chinese and the Tibetans.

Clearly excited by his project, Mr. He Gang eagerly described how he would have exhibits on artifacts associated with the Chamadao. He would also have a section where museum-goes could actually sample the different teas of the region.

The museum would be housed in a building to be erected along the lines of the erstwhile clan mansion in Zhongdian which is now gone.  I had to deduce that with the Communist triumph in China as well as the Cultural Revolution, wealthy entrepreneurs like the Ma’s would have probably been stripped of their properties.

Other people had actually moved into their ancestral abode. It would take time and a new dispensation before the He Brothers were able to negotiate for the return of what once was theirs. Unfortunately, it was only the land that they were able to recover as the structures had since rotted away from neglect with parts sold as scrap.

Later that afternoon we walked around the Old Town to see where the mansion had once stood—the site of the proposed museum. The lot had been completely cleared in preparation for construction. It was explained to me that this whole district had once been filled with shops that catered to the needs of the caravans.

Leather workers, potters, blacksmiths, weavers were all kept busy by the many requirements of the traders. Imagine what it must have been like: in one corner, a saddle was being fashioned, across the street, stirrups were being beaten into shape, further on, a coat was being sewn out of thick furs! What a din there must have been as the streets reverberated with the sounds of simultaneous creation!

All that was left from the era of the Trade was the town’s old wall, reduced to its terra cotta heart by the merciless sun. There was still a bustle but this was fueled by the chic cafes and bookstores generated by the desires of a novel breed of traveler—the tourist.

We entered one of the new establishments, a coffee shop which, Mr. He reported, was the home of an aunt. He had played here with his brother as a boy. Where there had once been dim interiors there were now cozy clusters of chairs and sofas brightened by throw pillows.

I asked what it felt like to see childhood haunts transformed. Mr. He smiled and gamely noted that this was precisely the reason for his dream project: so that the changes of today do not completely erase the past.

Other places which still harbored the vestiges of another era were the local museums. I was quite impressed to find that such a small town actually had two. The first featured general displays about the customs of the area along with an elaborate three dimensional catalog of the useful plants of the region which filled the second floor.

The second was dedicated to the years of the Long March. The March involved thousands of soldiers of the Communist Army trekking, starved and frozen, through the dangerous passes around Zhongdian to escape rival troops.  Their travails are the subject matter of the exhibits which are elaborate affairs utilizing sound and light effects.

Looking at the tableaux and murals I saw how the central authorities who had set up the museums were actually trying to fashion their own legends and explanations. These would ensure a revered position in the cosmology of this mountain world. So it was that the tableaux present the soldiers bravely battling the snow and the wind, heroic and indefatigable in the face of environmental adversity.

So it was that the paintings on the walls illustrated the Tea Horse Trade with images of a mandarin, splendidly attired,  serving a tray with a long-necked vessel and cups to a group of men clad in furs leading a clutch of ponies.

Prominent are depictions of the Han Chinese bringing the blessings of civilization to the alpine tribes who are depicted as receiving the incoming battalions with smiles and gestures of solidarity, declaring their support for the People’s Revolution. What emerges is a seamless saga of cooperation and congeniality between valiant vanguards from beyond on one hand and hospitable natives on the other.

Was this the truth? Were the reasons for the intrusion of the Communist forces clear to the inhabitants of these secluded valleys? Is it possible that the newcomers were met by confusion or even resentment? Is it possible that, even then, the populace already felt the first stirrings of the sentiments expressed by the Tibetan protesters that we see on television these days?

I tried to point out to Mr. He that the Tea-Horse Trade could not always have been smooth and tranquil. Surely there were clashes. Surely, there were arguments, fights, violence, even as civilizations collided. But my new friend only smiled and shook his head impatiently, wanting to talk some more about his pet project.

I stood on the steps of the temple at the very heart of Zhongdian. This was the very same shrine to which Old Man Ma had made many generous donations. I could see the deep blue of the peaks that ringed the town. Once more the mountains remained inscrutable. My questions would, for the moment, remain unanswered.