Rep. Cynthia Villar: ‘If you want to help your country, you move on’ | Inquirer Lifestyle ❮ ❯ 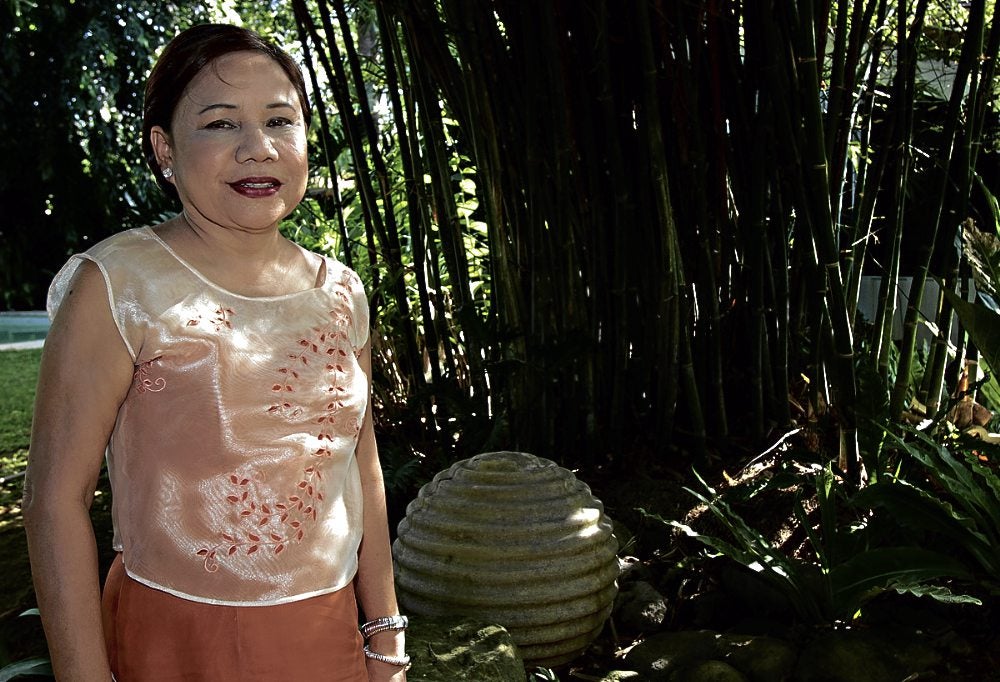 Rep. Cynthia Villar: ‘If you want to help your country, you move on’

Businesswoman and former Las Piñas Representative Cynthia Villar, wife of Sen. Manny Villar, recently took a stand in the raging debate on the Reproductive Health (RH) bill. At the risk of alienating pro-choice and progressive women’s groups, the senatorial aspirant described herself as “pro-life.”

Villar pointed out that the country wasn’t lacking in laws as far as ensuring women’s rights and wellbeing are concerned. The former president of the Lady Legislators of Congress should know.

In her nine years in Congress, Villar claimed to have worked with fellow representatives in crafting and passing such laws as the landmark Magna Carta for Women, anti-violence against women, anti-trafficking against women and children, and even the juvenile justice system.

She also championed the protection of children in the workplace and two versions that led to amendments in the Senior Citizens Act.

“If you ask me, it’s not about passing another bill, but the implementation of existing laws,” said Villar during a recent Christmas lunch she hosted for lifestyle journalists in the family’s Las Piñas home. “I think it’s better to focus on oversight to make sure existing laws are implemented. Passing the RH bill isn’t worth all the trouble it is causing.”

But since the contentious bill was already passed on second reading in Congress during this interview, Villar, ever the pragmatist, seemed resigned to its eventual enactment.

(Husband and wife share the sentiments, as Sen. Manny Villar voted against the RH bill.)

“Anyway, what’s done is done,” she said. “I don’t believe that legislation is the cure for all our problems. What we really need are actual projects that require implementation. Besides, a country with a sizable population would be ideal if managed well.”

Looking svelte in a two-piece ensemble consisting of an embroidered beige kimona and long orange skirt by Noli Hans, Villar came from the launch of the Villar Social Institute for Poverty Alleviation and Governance, or Sipag, a think tank complex of sorts along the once controversial C5 extension in Pulang Lupa.

“It’s a knowledge center focused on poverty alleviation,” she said. “It will include books on poverty, data and best practices in the country’s 16 regions. I envision it as a one-stop shop for researchers, including students and members of NGOs and LGUs (local government units).”

The Villar Foundation has partnered with the Asian Institute of Management and representatives of 16 regions to do research and provide it with fresh data. Since anything involving numbers is not constant, the institution will always be “a work in progress,” Villar added.

Retirement is far from the horizon for both. Villar, after a two-year hiatus from politics, has become more visible in preparation for her senatorial run.

Manny, a former presidential aspirant, has decided to retire from politics to focus on the family’s businesses, including their real estate empire, Vista Land.

Eldest son Paolo and youngest daughter Camille work for the family enterprise, while second son Mark has followed in his parents’ footsteps in politics as current representative of Las Piñas.

Villar, a native of Las Piñas, belongs to the wealthy and influential Aguilar clan of the former farming and seaside town.

“Villar Sipag will benefit not only the city of Las Piñas, but the entire country,” she said. “This is something we want to leave the people as our legacy.”

The building houses several training rooms, two museums and a hall that can accommodate up to 1,000 people. Beside it is the yet-to-be finished Catholic church dedicated to San Exequiel Moreno, a Spaniard who once served as parish priest of Las Piñas from 1876 to 1879.

To make the place self-sustaining and an attractive destination for people coming from the provinces to do research, it will have a small lifestyle mall and hotel.

“People endorsed by their respective LGUs whom the Villar Foundation has chosen to sponsor can stay in the hotel for free,” she said.

Villar Sipag is different from the livelihood center the Villar Foundation established earlier. The Las Piñas-based center, which Villar is trying to replicate in other parts of the country, is into actual income-generating projects.

“There are many beneficiaries of our livelihood projects, and majority of them are women,” said Villar. “It’s really a matter of making them earn.”

Asked if she and her husband have completely gotten over their differences with President Aquino after the bruising 2010 presidential election, Villar said that their relationship with the president is “okay.”

After all, she’s running under a coalition composed of several parties, including the Aquino-led Liberal Party and the Villar couple’s Nacionalista Party.

“We take everything in stride,” said Villar. “At a certain point, it’s finished and you take it from there. Our policy as a couple is we move on.”

The unlikely arrangement may appear politically expedient to some. But to Villar, the move is just being pragmatic.

“There’s no use dwelling in the past,” she added. “If you want to help your country, you move on.”