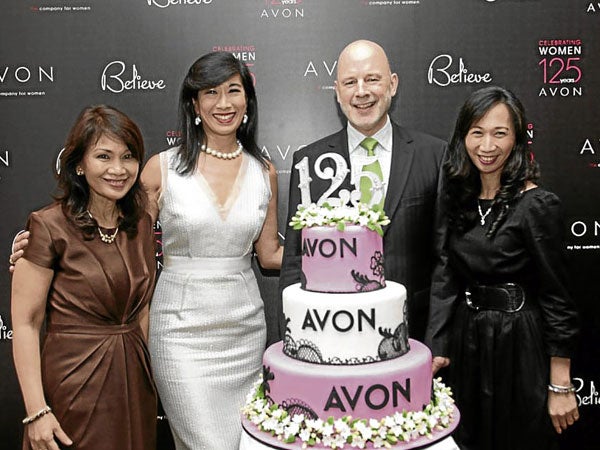 She’s rarely photographed without a string of pearls around her neck, and, since she came to head Avon Products Inc. in 1999, is rarely seen without her signature Avon lipstick shade—President’s Red—on her lips. Today is no exception.

Tall and slender, Andrea Jung cuts a commanding figure as she enters the room. She’s dressed in a sleeveless V-neck shift the shade of shimmery sand. Clasped on her right wrist is a bracelet of pearls; a large, solitary diamond ring is on her right ring finger.

Her dark hair is brushed past her shoulders. This woman owns the side part, in much the same way the bob is Anna Wintour’s. She has applied Lotus Shield on her hair, she says. The new Avon anti-frizz product is a new favorite of the chief executive.

“People say, ‘You don’t need this because you’re Asian.’ But when it’s humid, even though my hair is straight…,” she trails off. “I’m addicted! I love the smell of it! Put it on your hair before you dry it. Honestly, it keeps it together. I can vouch for this product.”

On top of her chiefly duties running a Fortune 500 company with 40,000 employees and 6.5 million independent sales reps globally, Jung isn’t above doing mundane tasks like testing

“I spend time in our labs, reviewing the latest products every few months,” she says. “I get the first-run samples, the secret formulas, a year in advance. So you’ll get an e-mail from me saying this mascara flakes or this nail polish is now perfect, it doesn’t chip.”

From time to time, she receives different formulations of President’s Red from the labs; today it’s called Colordisiac.

But Jung, Avon’s first and, so far, only female chief executive and chair, has a bigger mission than whipping out beauty tips on her first Philippine visit in 12 years.

It’s early Tuesday morning, and in just a few hours, despite the torrential downpour, she will meet 8,000 of Avon’s top independent sales representatives at Araneta Coliseum.

The Manila event is expected to be the largest gathering of Avon representatives in the global jaunt, which kicked off in Atlanta, Georgia, in February, and will culminate in Johannesburg, South Africa. The 16 cities represent the company’s biggest markets.

Mike Gudgin, Avon Phils. president and general manager, points out that since Jung took over Avon’s helm, she has raised $800 million for women’s causes via the Avon Foundation in her crusade against breast cancer and violence against women.

By providing women the means to be economically independent, the company believes it’s empowering women worldwide. Avon provides livelihood to its 6.5 million independent sales force and their families around the world in a business model that essentially allows women to earn money without a capital.

Says Jung: “I’m proud that we’re the largest micro lender to women in the world. On any given day, there’s nearly $1 billion extended to women. They don’t pay us until they’ve delivered the products and received money from their customers.”

She adds: “We’re the company for women. Our founder, David H. McConnell, believed that women should be able to earn to support themselves and be economically independent. It was a novel idea 125 years ago, even before women could vote in the US. The thought is still very much alive.”

But Jung is a firm believer that “a woman can’t be empowered unless she’s healthy and safe,” ergo the $2-million Avon Global Believe Fund, of which $60,000 is awarded to the Women’s Crisis Center on this visit. The NGO is a shelter for women survivors of domestic and other gender-based violence.

Avon has been in the Philippines for 33 years and it has “embraced our goals,” says Jung. “The Philippines is one of the proudest markets we have. It has done more for women’s causes than most. Avon Phils. has raised P12 million since 2002 to support breast cancer. It launched Speak Out (the campaign against domestic violence) in 2009, because violence against women is unacceptable.”

She says that Filipino women have begun to find their voice, with the Philippine National Police recording a 91-percent increase in reported cases of domestic violence in 2010 versus 2009. “The problem is global. It’s an issue that knows no geographic or socioeconomic boundaries,” but even more of a concern for those women who are less economically secure, she says.

Jung’s crusade is not mere lip service. While other companies pulled back, Avon continued to fund its philanthropic projects even through the global recession two years ago.

“This is when the world and women need us more than ever,” she says. Even when the economy is in the dumps, “the causes don’t go away. My own perspective is that when we can help women, they will be part of the global solution for the economic recovery. Without women, the world cannot have the kind of robust economic growth over the next decade. Helping women is critical to the sustained recovery of the world.”

“When I got out of college, I wanted to join the Peace Corps,” Jung says. “My parents had no money and they said, ‘You really need to go and get a job.’ I thought for many years that there were two different choices: to get a job and to do philanthropic work and idealistically give back to the community. In Avon, I get to do both.

“I guess we all do; there’s a purpose in the work, a social goodness. It’s almost not a for-profit work, except that we get to do it for a profitable company. Not many get that privilege to do both. I’m inspired by women; I don’t know how they find strength to have such positive optimism and achieve the things they have.”

She adds: “I’m not a fan of the word ‘power,’ but in the kind of work I have, I can influence society, I have the opportunity.”

Jung relates stories of Avon women she has met in her global tour. There’s the widow in Argentina, a mother of five, who traveled eight hours by bus to the big city, in Buenos Aires, for the first time; she won the car they raffled off. The woman nearly missed the trip to fulfill her church volunteer duties.

Then there’s the woman in Istanbul whose family lost all their possessions in an earthquake in 2003. “Culture didn’t allow for her to work, so she disobeyed her husband and worked privately during the day and sold Avon.”

The woman got very successful, becoming senior executive unit leader. With her income, they bought a new home. “She says that in Turkey, she’s the only woman whose husband goes home and makes dinner for her. These stories, they’re the same, whether they’re in Manila, Shanghai, Delhi… They’re able to change their lives and it’s very inspiring.”

It’s women’s time, Jung says. “Women are breaking through in politics, in business. In the next decade there will be more opportunities for women in every aspect in every country. The next decade will be a breakthrough era.”