Monique Wilson: ‘The fire in my belly was not fame’ | Lifestyle.INQ ❮ ❯ 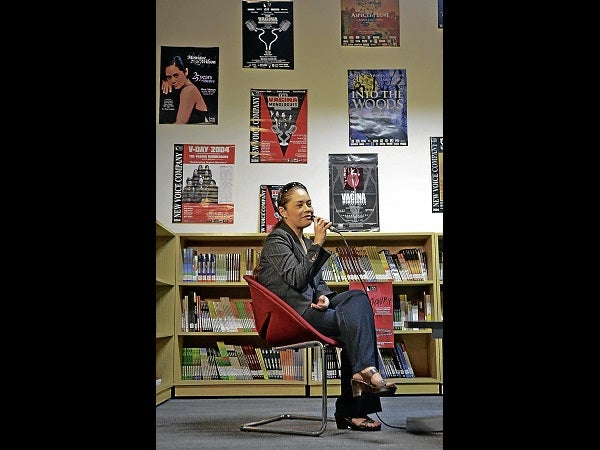 Monique Wilson: ‘The fire in my belly was not fame’

At the recent “Mint Knows Monique” lecture at Meridian International College last week, students and fans got to know Monique Wilson on a deeper level—from her naughty childhood moments and her life in London during “Miss Saigon” to her unwavering passion for theater and her One Billion Rising campaign against violence against women. Here are excerpts.

On the first time she watched a play, “The Diary of Anne Frank,” when she was 3 years old:

“It was at CCP. I was so amazed and captivated by live theater that my mother told me that in the interval, I was trying to climb the stage because I wanted to join the play. I wanted to be a part of that world, that world was so amazing to me.”

On how much theater excited her as a little girl:

“My mother used to take us to every opening night of Repertory Philippines. I used to get so excited that I used to be so ill. I used to throw up on opening nights sa sobrang excitement. It’s not my show, I’m just watching. My whole family would go, tapos maiiwan ako sa bahay, ‘Kasi you’re sick eh.’ I would end up going with my aunt on the matinee the following day.

On the hardest part about doing “Miss Saigon”:

“The biggest challenge was living on my own when I was 18 or 19. I didn’t know how to cook. I was always buying Chinese takeaway and pizza, it was so unhealthy. And I had to take care of my own house. I would leave the house with my windows open and the door unlocked and my neighbors would freak out and they would say, ‘Monique, shut your windows.’ There was also homesickness and, of course, the desire to share it with your friends and family. It was so overwhelming. But it was so full-on, our schedule was so tight and pressurized that we had no time to worry, no time to get scared. All I remember was a feeling of excitement. We were so excited.”

On the importance of training:

“A lot of people kept saying ‘Sayang naman your career.’ Why sayang? Why is that word always being told to me? I don’t want naman the fame eh. The fire in my belly was not fame. I wanted to learn theater, I wanted to put up a theater company, I wanted to teach theater. So I went back to London. And it even enhanced my career. If you are trained and you have skills, that’s something no one can take away from you.”

On putting up New Voice Company:

“I had this dream that theater would not just entertain but awaken people and inspire them to take action on issues. I really felt that theater could be used for social engagement and social transformation. I needed to marry my art and my feelings of activism. I wanted to use the arts as a powerful advocacy tool.”

“I always believe the Filipino audience is an intelligent audience. I don’t believe in dumbing them down by giving them the same kind of shows.”

On her coming out:

“A lot of my colleagues and friends knew about it, it’s just never been a public issue. I’ve always been hesitant to say I was gay because I thought people would focus on that instead of my theater work. One Billion Rising is a campaign that aims to make violence against women the number one priority of the government. I kept telling everybody—break the silence, break the silence, but there’s a huge part of me that can be used to break another kind of silence. I decided to do it. Violence against women are linked to all kinds of oppression and discrimination that includes the LGBT community. I had nothing to lose.”

Her advice to young actors:

“Work hard and give the industry the utmost respect it deserves. You do not tear it down. You have to do everything in your power to build the industry you belong to. You can be critical but you have to be solution-oriented. You cannot be naysayers and negative people and just bitch and moan. Actors tend to think of the self and not the bigger picture. My advice to young actors is think of the bigger picture. Serve your industry. It’s much bigger than you, but you are an instrument in it.”

On playing Anna Leonowens in “The King and I” (still ongoing at Resorts World Manila):

“I read all the books, everything she wrote. 1860s, for a woman to do what she did? I think she’s a feminist. I didn’t want to make her a stereotype of a woman who’s docile and obedient because I’m sure she had strength of character.”

On doing the monologue “Reclaiming Cunt” in Tagalog at the 10th anniversary of V-Day at the New Orleans Arena:

On the One Billion Rising campaign:

“It’s a global call to action. We are demanding that the government focus on ending violence against woman their number one priority. It’s outrageous, the statistics of the United Nations—that one in every three women will be raped or beaten in her lifetime. That is a huge statistic.”

On aging as an actress: