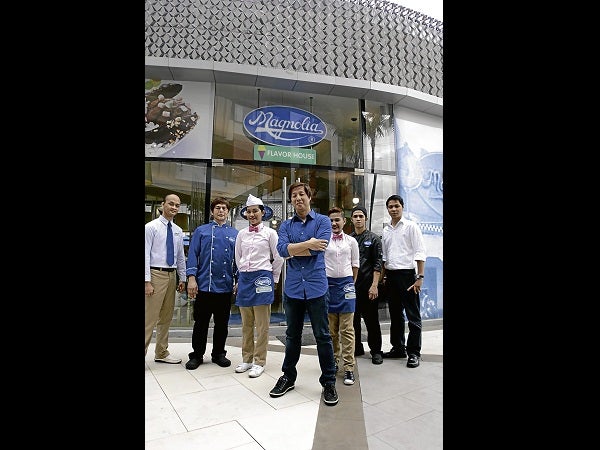 It was the place to be in the ’70s and ’80s, a Quezon City landmark families flocked to, regardless of where they lived, for irresistible scoops of the classic cobblers, parfaits and banana split.

Decades later, the spot where the Magnolia plant and Ice Cream House once stood is creating sweet memories for families again, this time as Robinsons Magnolia, a massive multi-story shopping arena located within what developers envision as a mixed-used property.

Acquired by Robinsons Land Corporation in 2006, the 108,000-sq m property situated in the corner of Aurora Boulevard and Doña Hemady Avenue is an exciting work in progress. Plans show provisions for the Magnolia Residences, a two-hectare community of four condominium towers with one- to three-bedroom units scheduled for completion in the middle of 2014.

For now, the attraction is the mall, a bright, wide-aisled four-level building that is home to both familiar and fresh names in local and international food, apparel, and footwear brands, as well as select specialty shops and services.

Given its proximity to residents in the New Manila area as well as those from the gated communities of Greenhills, where shopping centers are already aplenty, Robinsons Magnolia boasts an affluent clientele, a factor that’s making this mall thrive.

“It might not have the same foot traffic as the other Robinsons malls,” acknowledges Maria Carina C. Ventura, group property manager, “but the buying power is so much higher.”

Upscale brands and tenants aptly complement this crowd. US apparel and accessories brand Perry Ellis, says lease manager Jenalyn N Apostol, will open its first branch here, as will Lombardi’s, a restaurant from the Cravings group. And Stores Specialists, Inc.’s premium fashion and lifestyle brands figure prominently in one area of the mall.

“When we offered the spaces for lease in December 2011, all spots were filled by February 2012,” says Apostol.

While smaller next to Robinsons Galeria, Robinsons Place Manila  and Robinsons Metro East, the 53,000-sqm Robinsons Magnolia, Ventura points out, is an improvement on its sister shopping centers. Note the vibrant tenant mix, better zoning of shops and ultra-modern design.

Even the food court, often dismissed as a meeting place for the masses, boasts an elevated ambiance: instead of the cafeteria style of service, casual-dining tenants are broken down into circular stations. Seats and tables, meanwhile, resemble those found in cozy restaurants.

“We may not be as big as the others, but we’re proud to say this is a complete mall,” says Ventura with a smile.

Ironically, the big hit among Robinsons Magnolia’s guests is found outdoors. Steps away from the mall’s entrance, the al fresco area—all three levels of it—offers an inviting escape, with its refreshing gardens, relaxed setup and colorful restaurant choices.

An instant favorite: a revival of the Magnolia Ice Cream House. It’s now operated by Pierre Ching, the young entrepreneur behind Hainanese Delights and Skin Perfect Facial Center, and a loyal patron of the popular joint back in the day.

Understandably, it’s the ice cream that people come for, says Ching, and while he has developed new offerings, like the rich Stone Cold selection, customers still prefer the parfaits, Peach Melba, Dare Devil and Merry-Go-Round.

The bestseller, of course, is a favorite of Ching’s and countless other ice-cream lovers from all generations. “The Banana Split,” says Ching with a smile. “Everybody still craves for it.”