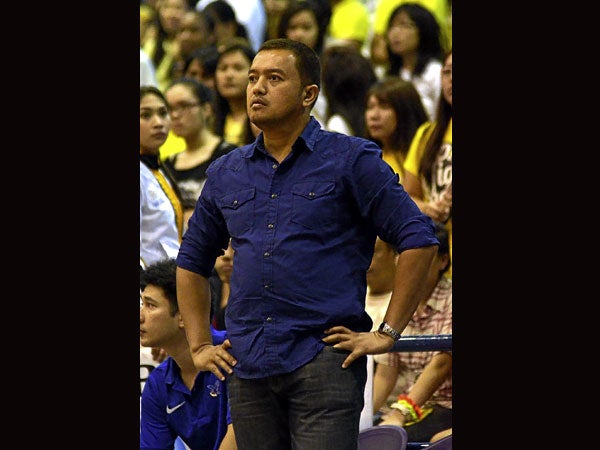 His anxiety stems from three things.

Bo Perasol, the new coach of the Ateneo men’s basketball team, admits to this as school officials introduce him before a small gathering of past and present players, alumni and supporters.

First, Perasol says, he worries how quickly the Blue Eagles can recover now that their top players have graduated.

Second, he wonders how he can meet the high expectations of a school so used to winning.

“How am I going to get a body like Norman Black?” Perasol deadpans. “That’s the most difficult.”

The punchline gets the entire room rocking.

Of course, Perasol knows that his punchline isn’t exactly what sent the crowd laughing. The reality is, it’s more than just Black’s buff body he needs to measure up to.

Black – the American coach who looks impossibly fit at 55 –steered the Blue Eagles to a phenomenal fifth straight championship in the University Athletic Association of the Philippines (UAAP) last October.

“It’s something that’s inevitable,” Perasol says of the likely comparison to Black. “But it’s not going to bother me because the person you’re going to compare me with is a very great coach. So comparing me with somebody who has achieved so much is like an honor for me. Of course, I’ll find a way to at least be at par.”

Although Perasol braces for criticisms, they’ve been few and far between. Ateneo, after all, continues to bask in the afterglow of a fifth championship.

For weeks, Perasol himself gets caught up in the extended celebration of the latest title conquest that made the Blue Eagles the longest reigning UAAP basketball team in the last 40 years.

So this newly minted Ateneo coach knows there’s no way he should mess this kind of hearts-and-roses love affair that the Blue Eagles have with basketball.

“Of course, I know the expectations are high. It’s expected,” says Perasol. “For me, if you have people expecting you to win because they love this team, you wouldn’t want to fail them. I don’t want to be the cause of their frustration. I feel responsible for that. I have to do my part so they can still be proud of the team.”

But the pressure mounts, too. “You feel it. It goes without saying,” he says. “It’s a different feeling when you win, then you win and win. You have to maintain the discipline, the tradition. But it’s a pleasant feeling that I can be part of this.”

Early 2012, Black announced that he was mentoring the Blue Eagles for one final season.  For a lot of diehard fans, it’s hard to see someone else in the sidelines apart from the amiable coach who led the school to unprecedented sporting heights.

But it’s a change Ateneo had to deal with swiftly and efficiently.

Recalls Edward Go, the chair of Ateneo’s board of trustees and search committee: “There were many names suggested and we’ve discussed them. We get calls like, you better choose correctly or you’ll never hear the end of it.  When we met with Perasol, the committee was unanimous that this is the man we want to succeed Norman.”

Indeed, it is easy to be charmed with how Perasol expresses his thoughts – articulately, sensibly, and if need be, halfway between being serious and humorous.

But good credentials also back his likeable demeanor.

The 41-year-old Perasol-whose real name is Dolreich but got nicknamed “Bo” since he shares his Nov. 30 birthday with national hero Andres Bonifacio-got his coaching career going early.

Soon after playing for the University of the Philippines in the UAAP from 1990 to 1995, Perasol called the shots for his alma mater’s high school team.

“It just flowed,” Perasol says of his relatively quick rise in the coaching ladder.

A two-time PBA finals mentor, Perasol’s shining moment came in the 2011-2012 PBA Philippine Cup where he steered the Powerade Tigers – an often overlooked pro squad-to the championship series. Spoiling predictions, his Tigers leapfrogged over two seeded teams before bowing to powerhouse Talk ’N Text in the title round.

“Bo has already shown he’s a quality coach in the PBA,” Black says. “I’m sure he’ll do a good job.”

But that Ateneo job—undoubtedly one of the more high profile, sought-after positions in the local basketball scene—didn’t land on Perasol’s lap easily.

Initially, it did look like it when Ateneo officials namedropped Perasol as their “first choice” to take over Black. When the UAAP season rolled by, it was virtually clear that Perasol had already clinched the post as he became a regular fixture in the Ateneo gallery.

Yet the seemingly smooth transition didn’t go as planned when tycoon and top Ateneo patron Manny V. Pangilinan surprisingly announced one September morning that he was severing ties with his alma mater due to opposing views on various issues, among them the Jesuit fathers’ anti-mining stance. MVP is widely seen as the corporate face of Philex Mining.

The development placed Black and Perasol in a tricky situation as both coaches regard Pangilinan as their “patron and benefactor.”

Black offered to resign in the middle of the Blue Eagles’ drive for a fifth crown—but Pangilinan decided he should finish the season—while Perasol also begged off from the appointment as successor.

“I was ready, I already had my notes. But in a split second, everything just changed,” says Perasol.

But just as unexpected as the public breakup was the reconciliation that came in November. Fortunately for Perasol, the mended partnership between Ateneo and Pangilinan also got him back on board on a three-year deal.

“No second thoughts on what I signed up for,” says Perasol. “One reason I left the PBA is to have a change in working environment. The winning tradition is also inviting.”

“The Ateneo community is not only used to a winning tradition, but a winning championship tradition. That’s a lot of difference,” Perasol continues. “What coach Norman said is true. I just have to step on it, get the guys going, put on more manpower. The system is there, the program is there. What’s important right now is that the template is there. But of course, I have to do my part in maintaining that.”

And no less than Ateneo president Fr. Jose Ramon “Jett’ Villarin, SJ has reminded him of that.

“Coach Bo, you have big shoes to fill,” Villarin tells Perasol during his formal introduction to the community. “But I’m confident that you’ll not only continue our winning tradition, but more importantly, you’ll be a good teacher and mentor to our young men. We have seven months to go before the opening of the next UAAP season. So let’s hit the ground sprinting.”

Black himself tells the crowd: “You guys go easy on Coach Bo please. He’s going to need some time to put in his own system [and] build his own foundation so he can also continue the winning program in Ateneo.”

The Perasol ribbing didn’t stop there, with witty references from the school hymn’s most famous line [“Win or lose, it’s the school we choose”] to the university’s sequicentennial celebration.

“The dormers told him, ‘You know Coach Bo, this is our spirit in Ateneo. Whether we win or do not lose, it’s the school we choose,’” Villarin shares with a laugh. “Someone also gave him our 150 years centennial book. But he was told, ’Coach Bo, we’re not giving you 150 years. We’re only giving you until next year to win.’ So he already knows the pressure.”

Perasol joins in the laughter, apparently relishing the jovial mood while it lasts.

“I don’t know how it will be. There’s no adversity yet. Everyone’s still happy,” he says.

But when the real work starts, Perasol knows there just might be less of those laughs. Winning, after all, is a serious matter.