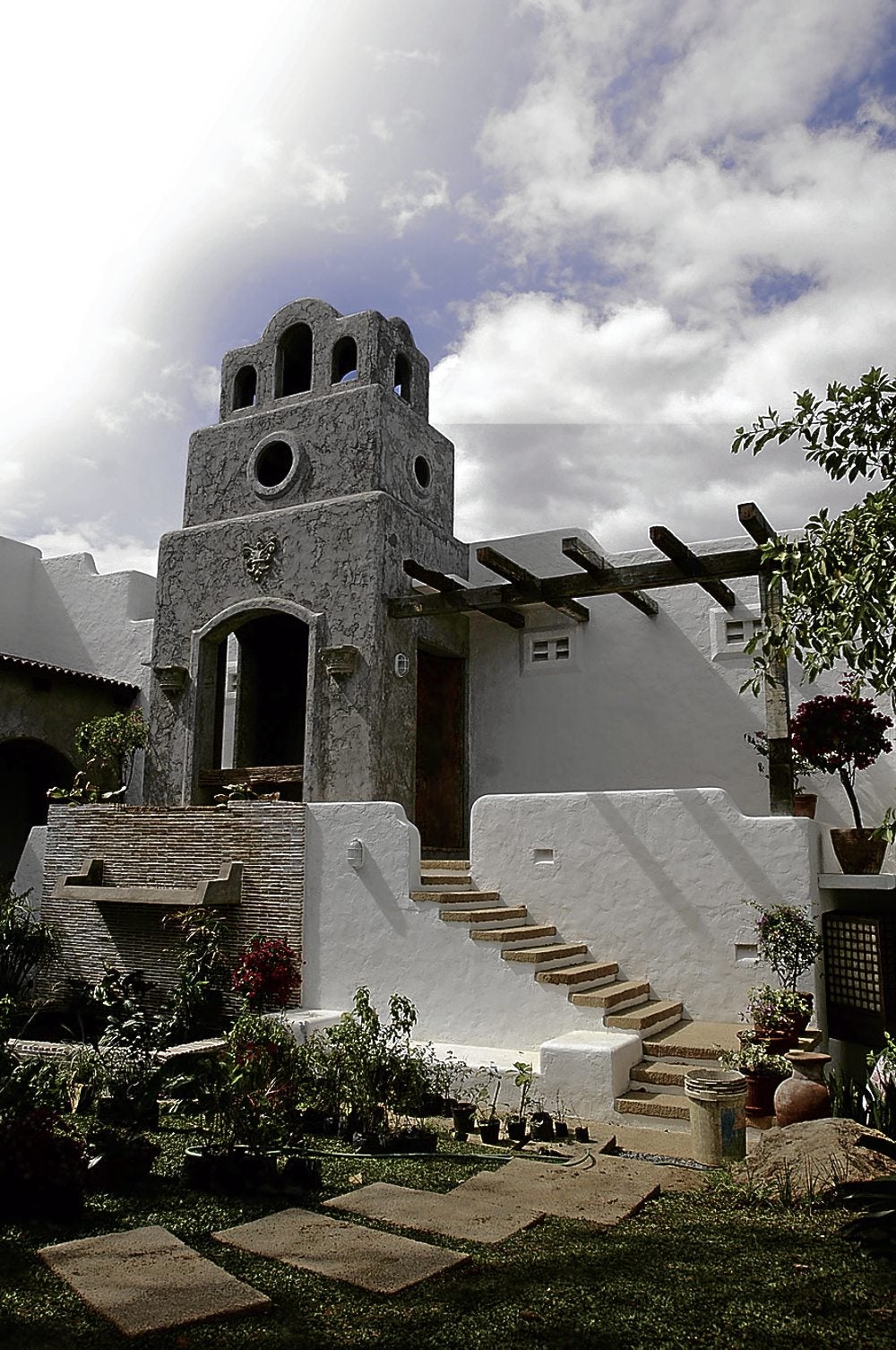 Hidden in a subdivision in faraway Antipolo, a museum showcasing the works of upcoming artists has gradually expanded through the years. The latest addition at the Pinto Art Gallery is a house with a central garden designed in the California Mission-style. Three connected hallways look out into the garden named after the owner’s late sister, while the first level of the house serves as the fourth hall.

Owner and art collector Dr. Joven Cuanang told Inquirer Lifestyle that it’s not really a house, although there is a living room and dining area on the first floor. A bedroom is linked to a library on the second floor through a walkway lined with framed drawings, mostly by Elmer Borlongan.

“The expansion—like the main museum—was designed by architect Antonio ‘Tony’ Leano. I allowed him to design the area as he saw fit because I was already aware of his capabilities,” Cuanang said.

Leano was a former artist in residence at the museum, and some of his works, along with those of his contemporaries, are on display. In fact, his latest installation is housed in a 100-sq-m room within the property. As he was still in the process of putting things together at the time of our visit, we were unable to view the installation.

Cuanang narrated how Leano created an installation many years ago where viewers entered a room and were “engulfed” by a forest.

“It was very quiet, all you could hear were drops of water falling into pools. When the water struck the pools, light would emanate and radiate,” Cuanang said.

Instead of leveling the hilly area, Leano worked with the terrain, keeping the boulders and outcroppings that now pepper the public areas. Viewed from the landing of the original museum, the boxy new buildings share a similar aesthetic: white stucco walls with rounded edges and the studied use of well-worn wood.

“There’s nothing new here,” Cuanang said, gesturing at the walls, ceiling and floor of  the library. Instead of using new wood or, worse, plywood, Leano picked and chose from Cuanang’s inventory of old wood from houses that were saved from being demolished. Huge double doors with peeling pink paint open into the garden. Directly above are three church bells.

“People who have seen the new expansion say it gives off a very monastic vibe, that it feels like a monastery—and they’re right,” Cuanang said.

The two hallways connecting the house, however, consist of rooms with a secular bent. The video room currently plays a short film by Geraldine Javier, while the audio room is peopled with pairs of figures all “talking” simultaneously.

“It’s very eerie in the audio room because there’s this cacophony of sound but you really can’t understand what is being said,” Cuanang said. Sculptor Stephanie Lopez designed the figures and the audio, which were first exhibited at Boston Gallery, Cuanang’s gallery in Cubao, Quezon City.

“I liked the whole concept so I ended up buying the show. It’s very Filipino—tsismisan (rumor-mongering)—but then you don’t understand any of it, which is sometimes what happens when people talk at the same time,” Cuanang said.

A third room, one that’s for adults only, houses some of the owner’s pieces that are sexually explicit. Since the museum gets a lot of school-aged kids, it’s probably best that this room is kept securely locked when they come a-visiting.

Asked if he intended to expand the museum some more—given that some 30 percent of his art collection has yet to be displayed—Cuanang said this would be the last expansion.

“I remember saying I would stop; but then we opened this ‘house.’ There are more pieces to display, but maybe we’ll just rotate them because this expansion is big already,” he said.

Leano saw to this by making the walls on the first floor extra wide. One wall is filled with a triptych by Ferdie Montemayor of a triathlon. The commissioned large-scale black-and-white work shows groups of cyclists, swimmers and runners.

“I saw studies of it being sold at  Art in the Park. They were coupon bond-sized. I told the artist, ‘Lakihan mo (Make them bigger).’”

Just across the Montemayor triptych are two large paintings by Demet dela Cruz. The one above shows a native ox, its hide printed with the iconic “LV” brand, while the one below is designed to look like a half-open shoe box containing a crocodile—or is it a pair of croc-skin shoes?

One can spend the entire afternoon looking at Cuanang’s treasure trove of contemporary Philippine art, and that is exactly what many visitors do.

Should they want a bite to eat, a small café run by Bizu is open, but only on weekends. The museum, however, is open 9 a.m.-6 p.m., Tuesdays-Sundays.