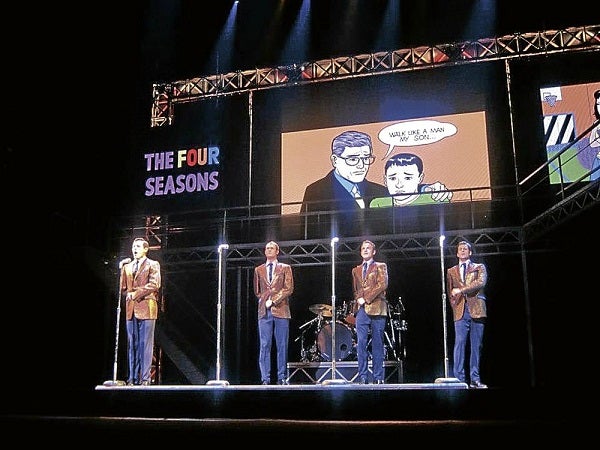 THE HIT Broadway musical “Jersey Boys” tells the story of the rise of the hit rock ’n’ roll group Frankie Valli and the Four Seasons. It runs at theMasterCard Theaters at The Shoppes atMarina Bay Sands until February.

Located at The Shoppes at the Marina Bay Sands, the two state-of-the-art theaters can accommodate close to 4,000 guests for international musical acts or award-winning Broadway hits.

The rebranding was timed to coincide with the gala night of “Jersey Boys: The Story of Frankie Valli & The Four Seasons.” The Tony Award-winning musical runs until February 2013, with performances from Tuesdays to Fridays at 8 p.m. and on Saturdays and Sundays at 2 p.m. and 8 p.m.

Mark Juliano, senior vice president of Marina Bay Sands, said that the property’s three towers with the infinity swimming pool perched on top has become one of Singapore’s most iconic structures in the three years that they have been open.

“As a company, we are looking for ways to grow the iconic stature of the property, not just in the Southeast Asian region but throughout the world,” Juliano said. 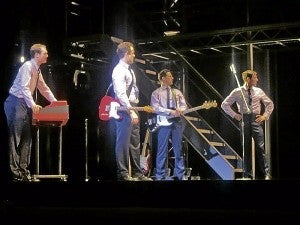 “Another iconic symbol that everyone recognizes is MasterCard’s intertwining circles of red and gold. Since they represent a network of partnerships between vendors and merchants, high-end luxury good purveyors and entertainment showcases, they became a great and natural partner for us,” he added.

Debbie Goldingham, head of marketing for South East Asia, told Inquirer Lifestyle that with the partnerships they have made in Singapore, namely the Singapore Indoor Stadium, Marina Bay Sands and Resorts World Sentosa, “we feel we have a very confident footprint across entertainment in Singapore that offers the best for everybody.”

Singapore recently joined the ranks of other iconic Priceless Cities worldwide such as London, New York, Beijing and Sydney.

“By partnering with BASE Entertainment, we are able to provide our cardholders around the world with even greater access to world-class entertainment acts,” Goldingham said.

With the rebranding of the two theaters, MasterCard now has a “very” structured platform so they know and can plan any and all promotions.

“This five-year program will give us the opportunity to plan. We will know 12-24 months in advance the shows that are coming down the pipeline that we can share with our cardholders,” Goldingham said.

The opportunity to plan which promotions to roll out will likewise benefit cardholders as they, in turn, will now have ample time to plan their trips to the Lion City. Goldingham said the rebranding was a “very strategic platform to drive ticket sales.”

“We now have a window that enables all our partners to plan. It will be far more manageable and workable to come up with sustainable programs,” she added.

Ultimately, those who will benefit from these developments are the MasterCard cardholders.

“It’s no longer just about dining or traveling or shopping anymore. It’s about the lifestyle—being able to experience or watch shows they might not be able to catch in their part of the world. This is a great opportunity for them,” MasterCard’s group head for communications Georgette Tan Adamopoulos said.