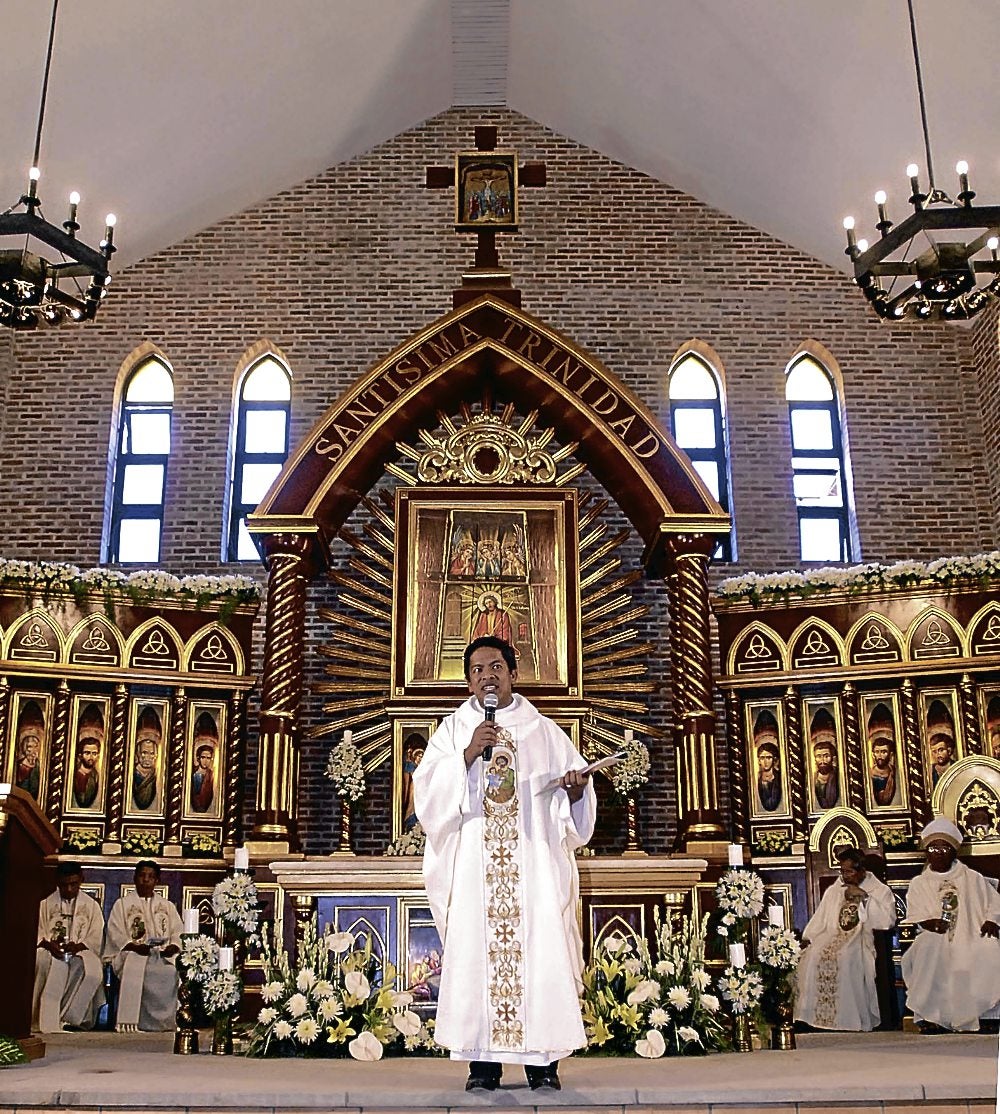 FR. FERNANDO Suarez talks to guests and the people of Ilin during a concelebrated Mass to mark the Santisima Trinidad Chapel’s blessing and official opening; above, an Israeli painter, who did the chapel’s 40 icons, presents to Fr. Suarez a religious artwork. JIM GUIAO PUNZALAN

A place of worship rises on the remote island of Ilin

When FR. Fernando Suarez, also known as the “healing priest,” first ventured to the remote island of Ilin in June 2011, he thought he was about to meet his Maker earlier than expected.

Although Ilin, which belongs to the municipality of San José, Mindoro Occidental, is a mere 45-minute boat ride away from the mainland, Suarez and company found themselves riding huge waves during what was supposed to be a routine trip. They were braving what seemed like a full-blown typhoon.

But God, as Suarez said recently, had bigger plans not for him, but for the materially and spiritually impoverished and isolated people of Ilin. He survived the journey, and less than a year later, Suarez began to put the Lord’s plan as he understood it into action.

In six months’ time, Suarez and fellow missionaries of Mary Mother of the Poor, a foundation he leads, were able to build the Santisima Trinidad Chapel and formation house, the first permanent place of Catholic worship on Ilin.

“I felt really dizzy during that boat ride,” said Suarez in a mix of Filipino and English during a concelebrated Mass to mark the chapel’s blessing and official opening less than two weeks before Christmas day. “I was beginning to doubt if I’d be able to go back to Manila alive. Yet, here I am today. I can’t believe I was able to stay here long enough and help build this church.”

Suarez, a charismatic speaker and celebrated healer, is known among many Catholics here and abroad for his healing masses, but unknown to many he has also taken up missionary work as part of his charism.

Suarez and fellow priest Jeff Shannon, a Canadian and now the parish priest of Ilin, founded the foundation several years ago. He and Shannon go back a long way, as the two studied together in a seminary in Canada. Suarez was already a licensed chemical engineer when he entered the priesthood.

When Bishop Antonio Palang of San José asked him where he wanted to be assigned, Suarez didn’t think twice about asking his superior for a hardship post where, in his words, “priests are impossible to exist.” He and Shannon, who speaks fluent Filipino, got what they wished for.

“When Fr. Jeff first walked through the island, he asked people what they needed,” Suarez related. “Because life is quite hard here, he thought people would be asking for material things like money, food and even medicines. Instead, most of them said they wanted a place of worship where ‘they could lift their spirits and soar high like anyone else.’”

“In a place of worship, no one is poor and no one is rich,” said Suarez. “We’re all equal in the eyes of God. That’s the kind of church we have today. It doesn’t distinguish whether you’re rich or poor, young or old.”

Apart from spiritual guidance from Bishop Palang and the encouragement of the province’s local government led by Rep. Girlie Villarosa and San José Mayor José Villarosa, Suarez relied on generous donations mostly from DM Consunji, Inc. (DMCI), which provided funds as well as expertise, to help him realize the project.

But despite all the moral and monetary support, not a few people consider the project’s completion a miracle. As Suarez noted, the island with no proper docking facilities and roads to speak of is far from being an ideal place to build a fairly huge concrete structure like Santisima Trinidad.

“Hauling off your small body to get here already requires considerable effort. How much more bringing in materials to erect an edifice that would soon become the people’s place of worship?”

To get to the shore, for instance, we had to get off the motorized boat, and board either mini bancas or rafts (balsa) individually or in pairs. Since the water was shallow enough, young men manually dragged the bancas and rafts to a bamboo footbridge a few meters away.

The footbridge connects to a concrete and elevated walkway leading to the shore. Young kids and the elderly require extra attention, as crossing the footbridge and a couple of ladders can be quite tricky. Otherwise, adults can choose to wade through the waist-deep water.

The people of Ilin, who routinely walk through uneven and hilly dirt roads since there are no tricycles to transport them around the island, used to have a much smaller makeshift chapel that once stood beside Santisima Trinidad. It was so rundown that people from DMCI later tore it down and built an adoration chapel in its place.

Furniture and accessories designer Ann Pamintuan of Movement 8 designed the adoration chapel’s altar, including its crucifix. A team has also begun landscaping the entire complex based on Pamintuan’s design.

But that came in much later, as the team from DMCI had to race against time—and several typhoons—to build the main structure, including a nearly finished three-story formation house behind the main chapel. Suarez envisions it as a place for future seminarians to discern whether or not life in the priesthood is for them.

“A seminary is like going through university, but a formation house is different,” said Suarez. “After going through seminary, students need to be formed spiritually. Ilin can be an ideal place for that because it’s isolated. At the same time, future priests can also attest to the sense of their mission because people here are among the poorest of the poor.”

Led by project engineer Mark Monar, people behind the construction hired mostly menfolk from Ilin. Bricks and roof tiles came from nearby Semirara Island, where a factory producing these components is located, while the rest of the materials—from hollow blocks and cement to GI sheets and steel bars—were shipped by barge from Manila.

With no pier to speak of, Monar and his collaborators had to time the delivery of materials during high tide. The barge had to be pulled in by a tugboat up to a certain point. From there, materials were transferred bit by bit either on a pump boat or a small banca.

“As soon as these bancas loaded with materials reach the shore,” said Monar, “our men started carrying them to the construction site.”

It was a slow and painstaking process since the area, apart from being located half a kilometer away, is situated uphill. Monar couldn’t use even a small tricycle to do the hauling because Ilin has no serviceable roads. Even bicycles, said Suarez, don’t exist.

“But we managed to do it,” said Monar. “We didn’t stop working even when there was a typhoon. We were aware that we had to stick to a schedule. No day was wasted.”

Described in the latest issue of the Missionaries of Mary Mother of the Poor newsletter as a modern adaptation of Romanesque architecture suited to tropical weather, the brick-clad structure designed by architect Susan Castillo has a floor area of nearly 600 sq m (including an outdoor portico), and comes with its own choir loft.

“The amount spent on the church and guesthouse, excluding the new adoration chapel, has reached close to P35 million,” said Monar. “We still have a month to go before we’re finished with the formation house.”

The entire main chapel, including its portico and canopy, can accommodate about 230 people. One of the altar’s most eye-catching features is a Byzantine-inspired tableau made of solid wood, which features 40 sacred icons, including the 12 Apostles and a scene from the Last Supper, painted by an Israeli artist from Galilee.

Giorgio, the Israeli painter, grew fond of the Filipino priest and his cause. He started shipping his artworks to the Philippines without any clear idea of how he’s going to get paid.

Since Giorgio, a Catholic, flew all the way from Israel to grace the event at Ilin, perhaps his greatest satisfaction was seeing his icons given special places of honor in the newly built chapel.

“My goodness, I can’t even afford an inch of these icons,” said Suarez. “They’re priceless. But because God wants it to happen, they’re right here in our midst today.”

But Suarez is aware that although life appears peaceful on Ilin, its people are suffering—“tahimik na nagdurusa.” Their poverty is both physical and spiritual. Building a chapel can’t change the situation overnight.

He and his fellow missionaries have supplemented their spiritual programs by building a pastoral center, clinic and computer center with 30 working computers. President Aquino, according to Rep. Villarosa, also allotted a substantial budget for Ilin to have several more classrooms and covered courts built.

For its part, DMCI, led by big boss Vic Consunji, also refurbished the island’s existing classrooms when the company saw how rundown they were. That wasn’t part of DMCI’s original plan, as it was focused mainly on the chapel and formation house.

When Shannon was new to the place, Suarez related, he was surprised because people, no matter how hard he tried to reach out to them in Filipino, hardly responded to him whenever he said Mass.

Then Shannon learned that many of them hadn’t seen a priest in a long time. They didn’t know how to participate in the Mass. That situation has started to change.

“God has a plan for this place,” said Suarez. “Whatever it is, we don’t know yet. But something good has started today with the opening of this church. This is how civilization and progress start. Everything comes from God and soon everything else will follow.”