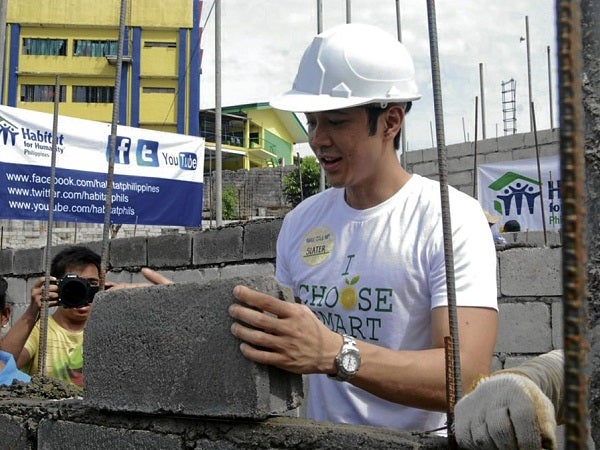 SLATER working on hollow blocks under the heat of the sun

Slater Young is ready for anything– even building houses in Payatas

It didn’t take long before life turned really, really crazy (in a good way, of course) for Slater Young after he exited the “Pinoy Big Brother” House. From living a relaxed and simple life in Cebu, Slater now lives a busy life packed with acting projects, events and endorsement gigs.

He can be seen in the ABS-CBN primetime show “A Beautiful Affair,” where he plays a nerdy guy who usually loses his temper (very un-him in real life, he claims). He is the endorser of respected brands like Greenwich and Smart C.

He is also the ambassador of World Vision, which has led him to sponsor a 7-year-old boy from Leyte and send him to school, and, more recently, Habitat for Humanity.

Last Dec. 7, 2012, Slater went to Bistekville in Payatas, Quezon City, to help build houses. This is his first project as an ambassador of Habitat for Humanity; his second one is another build, scheduled in Visayas this February 2013.

Arriving at the site at 8 a.m., the reality star got his hands dirty carrying hollow blocks, passing buckets of water and pouring cement. Slater admits that the whole thing wasn’t that exhausting, but that bearing the heat was really challenging.

Good thing his Smart C family was there to host the project and help out by providing bottles and bottles of refreshing Smart C juice drinks for Slater and his fans, who actually skipped work to show support for their idol.

Slater is, of course, grateful. He’s glad that he has very supportive fans and that he is able to use his celebrity status to do good things. Apart from the different projects he has to do for the organization, Slater also wants to spread the word about Habitat for Humanity and eventually get others to help once they know what the organization is all about.

And this is definitely just the start for Slater, who, no matter how busy he gets, promises to make time for his advocacies. He has exciting projects scheduled in 2013, plans to spend more time in the gym and bulk up, and he wants to try hosting. Slater wants to do a lot of things and with his talents and dedication, it looks like he really is ready for anything. Mark Sablan, Contributor