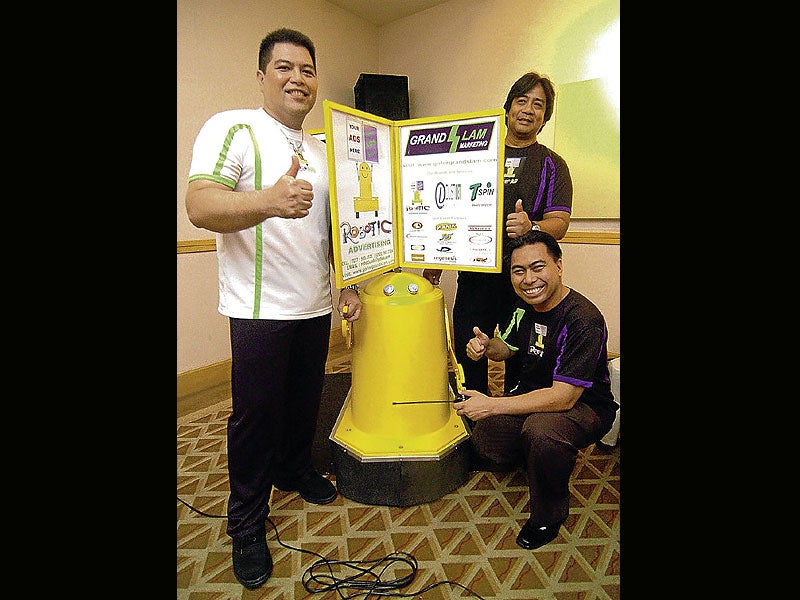 Product ads brought to you by–robots 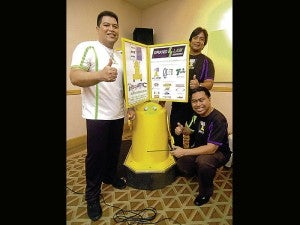 Dustin de Torres, director of GrandSlam Marketing, thought of using robots to modernize product presentation. It is a high-tech approach to catch the attention of people who are overloaded with information daily.

A Computer Science graduate of De La Salle University, he has been fascinated with robots since childhood.

“Robotic science gets more popular as technology advances. This is our way of catching up—by presenting ads in a unique, interactive, fun way,” he said.

De Torres is known in local tennis circles as the No. 1 ranked doubles player in the men’s 40-year-old category. He is also a popular tennis coach, and handles TSpin coaching company. His Dustdet events-management group coordinates sports and movie affairs.

According to the media kit, “the term ‘robotics’ was coined by Isaac Asimov in his 1941 science fiction short story… In the Philippines, Robotics Science is being implemented by the Science Education Institute-Department of Science and Technology, and is supported by the Department of Education.”

Two robots, in yellow and silver, were presented at the Rockwell Club during the recent launch. They are about 4 ft tall and resemble a smoother, sleeker R2D2, the famous robot from the “Star Wars” epic series.

Timbreza said it took three months to finish the robots which are made of metal, plastic and fiberglass. A robot is operated via remote control, and powered by a 6-volt, sealed-type rechargeable battery that lasts six hours.

Perched on the head of the robots are revolving, intercrossed billboards. There are four panels that can frame 16.5 x 23-inch posters. Four vertical ads can be placed on one robot.

Von de Torres, Philippine Marketing Association president and wife of Dustin, explained, “When buyers go to a grocery, it takes only 30 seconds to get their attention. Robots have a lot of recall because they’re catchy and cute.”

The robots were first rolled out at a Makati mall for the recent run of “Transformers: Dark of the Moon” movie. De Torres said moviegoers were awed. “People touched them, had photos with them. They were very curious.”

Robo Ads aims to make robots an alternative to mascots. They are a conversation piece and can be programmed to mingle with people, play jingles or give a spiel.

Safety is assured. A technician maneuvers the robot via remote control that can work from up to 25 ft away. A safety switch instantly turns the unit off in case of malfunction.

The robots move slowly, have smooth corners and are done in bright colors so that mallgoers, especially kids, would see them instantly, avoiding injuries. The billboards rotate slowly and wouldn’t hurt people in case of accidental contact.

For added security, they may be built to carry a first-aid kit and a small fire extinguisher. While the robots are initially intended for mall use, corporate events and product launches, they can also be used outdoors—in marathons, concerts, kiddie birthdays and theme parties.

Monthly packages start at P18,000 per billboard; P128,000 per robot for exclusive arrangements; P10,000 per robot a day, with a minimum requirement of three days. Prices are exclusive of VAT.