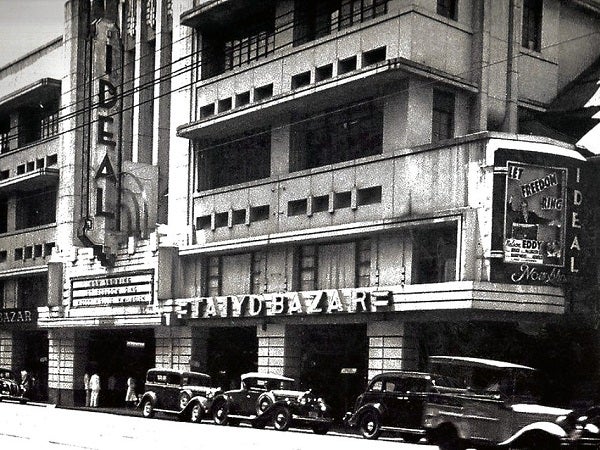 THE IDEAL in prewar years, built by Pablo Antonio Sr.,National Artist for Architecture, himself an in-law

One of the best things about growing up Roces was having our own cinema, the Ideal, exclusive Philippine exhibitors of MGM (Metro Goldwyn Mayer) movies. Among the thrills it gave me and my cousins, aside from the obvious one of getting to watch movies for free, was meeting the likes of Charlton Heston, the epic star (“The Ten Commandments,” “Ben-Hur”), and the debonair Ricardo Montalban. They were friends and occasional house guests of uncle Marcos Vidal Roces, who himself rivaled them in looks.

The Ideal offered entertainment for the taking and, for me, a privileged escape into make-believe: I could become Ann Blyth or June Allyson or whoever was playing at the moment. Sometimes I’d take along a classmate or two and, in the dark and the prized comfort of lodge seats, we’d thrill together.

We owned only one movie house, but in those genteel times the Rufinos, friendly rivals in the business, gave us passes to their Avenue, Ever, and State, in exchange for passes to our Ideal—the four houses were close neighbors in Sta. Cruz, the main street of downtown Manila.

I just couldn’t have enough of movies, and I loved watching them almost as much as retelling them to a captive audience of houseboys and housemaids at home. Some weekends, a maid in tow, I’d even walk the two blocks from our apartment home to the Scala and pay our way to a double feature.

When other interests and preoccupations kept Mom, wife to a congressman, from the movies, I had almost exclusive use of our passes. I’ve always wondered how the Ideal ticket-tellers and ushers remembered each one of us, as big a family as we were. When I went double-dating (single-dating was a no-no at the time), it somewhat embarrassed me when the ticket-teller, flaunting her efficiency, called out our movie-pass number from the booth and proceeded to hand the free tickets to my date. I, of course, had no illusions whether it was not my movie pass that made me a dream date.

When I got married, the benefits included free carpark space behind the theater, on the Sta. Cruz church grounds, which emptied out at the end of the day—the family donated the piece of land on which the church stands. My children’s generation, who went to a refurbished and remodeled Ideal, enjoyed yet another privilege, watching advance screenings in the new Preview Room.

Alas, in the last years of Martial Law, a blaze burned the Ideal down, never to rise again. The once fancy premier district of Sta. Cruz itself had begun to go, and Rizal Avenue, the cinema street, had begun to dim with overcrowding and overbuilding—the LRT railway contributed greatly to the blight. My heart breaks whenever I find myself in the area.

One of my fondest movie memories is when Lolo Rafael would take Lola and me to watch movies of Cantinflas, the Mexican comic, not at the Ideal but at either Capitol or Lyric on Escolta, where every now and then they showed Spanish-language movies. I remember that Lolo watched Lola and me more than the movie, enjoying the sight of us in stitches. Also his hearing, I suspect, had begun to fail him by then.

Life has come full-circle: Movies are free again. The privilege has been reinstated to me in Makati, where we seniors can watch free, anytime—unlike elsewhere, where, I’m told, senior time is designated—and where we can walk from where we live.

And if we feel like watching at home, there are always television serials and DVDs: “Downton Abbey,” “Line of Duty,” “Law and Order,” “Suits,” “Newsroom.” We were glad, though, to catch the Filipino Film Festival toward its end, and saw “Thy Womb.” We missed all the other entries, but thought from what we heard that we had probably seen the best: What it lacked for story was more than made up for with acting and cinematography.

As it happens, my husband and I are suckers for story, for which there’s just no substitute, and without which there’s no movie to speak of. It’s what I look for in books, TV serials, plays and movies. I watched and enjoyed every staging of Nick Joaquin’s play “Portrait of an Artist as Filipino,” and will watch the next ones.

I loved the clear, credible and dramatic unfolding of “Zero Dark Thirty,” Kathryn Bigelow’s movie about the Bin Laden hunt. I’m also looking forward to the new “Les Miserables,” the classic Victor Hugo, a masterpiece of a story. Now made into a musical with a powerful cast, it promises to be a double treat.

I do miss musicals, and I’m glad there seems to be a revival, another sign of life coming full-circle for me. And whenever my memory is triggered, I’m back at the Ideal.

Them were the days!