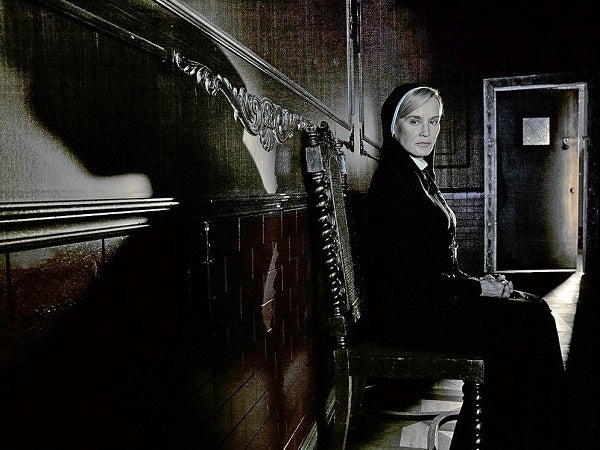 When we found out that we were interviewing the Jessica Lange, we knew it was time to confront our fears—literally. Ever since Ryan Murphy’s much-lauded anthology TV series “American Horror Story”  premiered in 2011, we’ve been dying to watch it, but we knew we’d be scared out of our wits.

We made sure it was broad daylight when we started watching season one. Two episodes into the season, we couldn’t shut our eyes. We braved the creepy imagery well into the night—just to see how it all ends.

“American Horror Story” features a fantastic cast and a fascinating and twisted story line that only show runner Ryan Murphy can come up with (remember “Nip/Tuck”?).

Since each season would wrap up its story line to make way for a new and unrelated one, the second season had Lange playing Sister Jude Martin, the strict and slightly sadistic nun in charge of the patients at the Briarcliff Mental Institution.

When we got on the phone with Lange, the first thing we asked her was how she was sleeping at night, given the highly disturbing scenes she would play day in day out (we couldn’t sleep with the lights off for quite some time after our AHS marathon).

Apparently, Lange is made of sterner stuff than us, because she just laughed and, in her soft, lilting voice, said: “It doesn’t stay with me. I’ve gotten better with that as an actor over the years, and it’s probably just from having done it for so long. When I finish the work, it’s over. I don’t think about it.”

She added: “The story is so dark. Within that, I find as an actor that I’m never let down by what he (Murphy) has written. Both of my characters (this year and last year) have not been really directly involved in the violence, so that also changes my perspective on it.”

While she has appeared in movies made for TV, this is her first foray into an episodic television show, and she’s glad that each season wraps up, allowing her to play different roles.

“It was a huge leap of faith because I had had no intention of doing television,” she said. “I’ve done a few TV movies but nothing sustained like this. That was also part of the attraction with the idea of creating a character over a period of time, having 12 episodes to actually pursue one character whom I thought might be kind of an interesting acting exercise… I’m also glad that I’m not doing other kinds of TV where I have to sustain it for 22 episodes or whatever. I really like it when they come to the end of 12 episodes, I’m pretty well done, ready to move on to something else.”

Lange added that another great thing about the series is that “Ryan has designed it in such a way that each year—and I think I’ll do one more (season)—is a completely different story, different environment, characters, actors. Nothing carries over from one to another, that’s interesting too.”

On the contrast and similarities between Constance Langdon and Sister Jude, Jessica said she appreciated how unusual each character was. “My character, I think, was very beautifully written, especially in the first season. There was a certain kind of Southern poetry to her which is what I’ve always wanted to do. She had great speeches, great monologues, so right away it piques curiosity and interest.”

On playing Sister Jude, Lange said: “It’s a character who has kind of a tremendous journey. She starts out appearing to be one thing. Bit by bit, the layers are peeled away and she is exposed as something quite surprising. It’s a very full character. I think much more complete than I played in the first season. It’s allowed me as an actor to play just about everything that I could imagine. There’s humor, there’s madness and just about everything in between, so it’s been a very satisfying character.”

When choosing roles, Lange likes looking for the off-kilter and the slightly crazy. “I love playing that kind of role because it does indeed allow you to go to places in your imagination that you can’t do when you’re playing a straight, normal character,” she said. “This year, I get to delve very deeply into madness, which is always one of my favorites. I haven’t really played a character like this since Frances. She (Sister Jude) goes far down the rabbit hole. It probably says something about me, but I love these characters.”

Despite the awards and accolades she’s garnered for “American Horror Story,” Jessica does not tune in to the shows. In fact, she just doesn’t watch TV.

But that doesn’t mean she’s unaware of the favorable feedback that the show’s been getting. She agreed that TV is entering its “golden age.”

“I feel that what Ryan has created for me in these two seasons of ‘AHS’ are some of the best characters I’ve played in many years,” she said. “These kinds of characters aren’t presented to me in a film anymore. I have found out, just by listening to people who are much more in the know than I am, that the quality of writing on television is, in some ways, surpassing the quality of writing generally in film. I guess because you can do more.

“I think the fact that TV is entering this golden age, it’s attracting some of the best writers, really great actors and a lot of great directors, like Scorsese working on creating “Boardwalk Empire.” So, I think, yes, there’s been a shift,” said Lange.

When asked how long she plans on doing “AHS,” she said three years is the right number, but an interesting character may convince her to do a fourth year. “I could be surprised if they come up with another really exciting idea in the fourth season. I might consider it. But I don’t know. I have a lot of other things to do, I just haven’t really decided.”