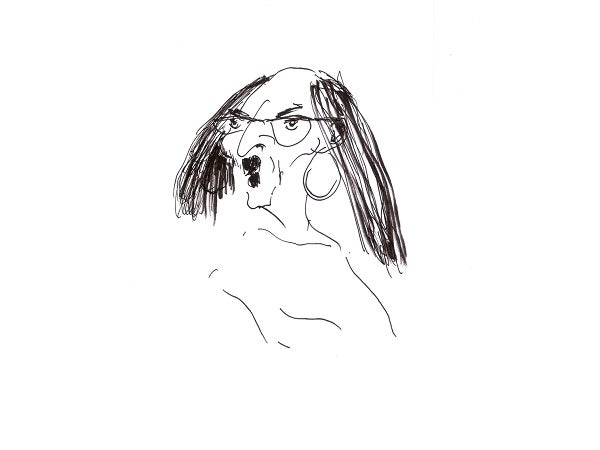 “DOUBT the Ben Franklin LookWould Ever Catch on,” illustration by Vergel

When do we begin forever? asks Greg, my hairdresser.

Forever alludes to the once-started-never-ended treatment for hair loss using a minoxidil-based solution. That, everyone seems to agree, is the one, the only, the ultimate, desperate hope.

Greg has been showing increasing anxiety to get me started. I see it clearly in his routine of mock exaggeration—pausing from the job at hand to secure my attention and planting his hands on his hips, then rolling his eyes, fluttering his lids as though heavy with mascara and false lashes, and finally pursing his lips in aristocratic contempt, à la Maggie Smith, the dowager of Downtown Abbey.

My procrastination has been provoking his gayness to full flower. Looking right down on it, he certainly sees best the extent of the denudation that I myself avoid confronting. But did I really think him able to forever perform his magic on me, the illusion of a full head of hair, by arranging and rearranging top strands and blow-drying them in place?

Indeed, he has given me final notice, in an unmistakable tone of utter frustration, “Ay-y-y, bumibigay na.”

It’s not an easy decision to make, this going for the forever treatment. It demands a commitment of marital seriousness—till death or, at least, till balding becomes the least of my worries. (In fact, I didn’t take this long to decide to get married.) It also comes with a Faustian condition: Once the treatment is stopped, all hair, past, present and future, goes for eternity. My own dermatologist friend has advised, “Go for it— there’s no other way.”

I guess I’m as ready as I’ll ever be. Another year older very soon, I don’t see forever to be so long now. I think I’ll do it before Greg throws in the towel and the rest of the paraphernalia of his magic.

I don’t mind revealing myself in this reality-show fashion. Even some magicians now make public, on television, the tricks of their craft, “to raise the level of magic,” one of them claims. I myself have no ambition that compares even remotely. I’m doing all this for myself, and if I let my readers in on it, it’s for what it’s worth to anyone among them—surely mine is no isolated case.

Me? I expect to forever be free at last from the fear of getting wet or being under the sun or seeing a glowing patch of my pate in every picture taken from a revealing angle. Between water and sun, I’d say cameras are the cruelest revealers—they raise the standing threat of exposure in Facebook and posterity.

Those pictures are demoralizing enough for me to avoid overhead halogen lights and to remember to keep my chin up and head thrown well back. Lately I have been noticing that cousin Ninit, one of the few in our circles untouched by denudation, has been taking rather long before showing pictures of us taken at parties and other social occasions—apparently, she collects and screens them.

Once I asked about pictures un-shown, she gulped, “I just can’t show them, not to anyone. Awful—almost everyone’s bald spot is showing. I had tried darkening them with ballpoint pen, but it only made things worse.”

I don’t know how men get away with it, but they do. I grew up surrounded by men whose lack of hair did not diminish their attraction, but for a woman, mere white hair is bad enough. Sara Halprin in her book “Look at My Ugly Face” writes that women are almost expected to get ugly when they age, but surprisingly, she seems to have missed balding as contributory to ugliness.

Dark-skinned, fat and age make her list, and of these, she says, “fat seems to be the great adjustable variable.” In fact, she adds, “fat is considered a moral issue, something bad for which a woman is to blame.”

I can only agree. My husband and I just got our blood test results, and our self-indulgence at Christmas clearly has taken its toll: cholesterol and sugar up. It all shows more in me: I’ve gained unsightly pounds and not only taken full responsibility for them, but begun to do something—diet and exercise mainly.

But with my hair, it hasn’t been simple. I felt helpless in fact in the beginning, and frantic, trying all sorts of herbal potions. I even tried shampoo for horses. It had taken a while before I became convinced I had earned the right to spend good money on myself.

I placed my fate in expert, expensive hands. In less than a year, with some progress made, they recommended another plan, another expense. I felt entrapped, and I didn’t like the feeling. I refused to be sucked into an open-ended investment, not even for hair.

I had settled for regular parlor works, done with expensive shampoo, until one day, my friend Malu, living proof that vanity pays, hair enviably lush and lustrous, sat me down to convince me to start treatment before it was too late. When she revealed that minoxidil-based treatment had been her secret for years, I was in.

Well, the dye is cast: Forever has begun.