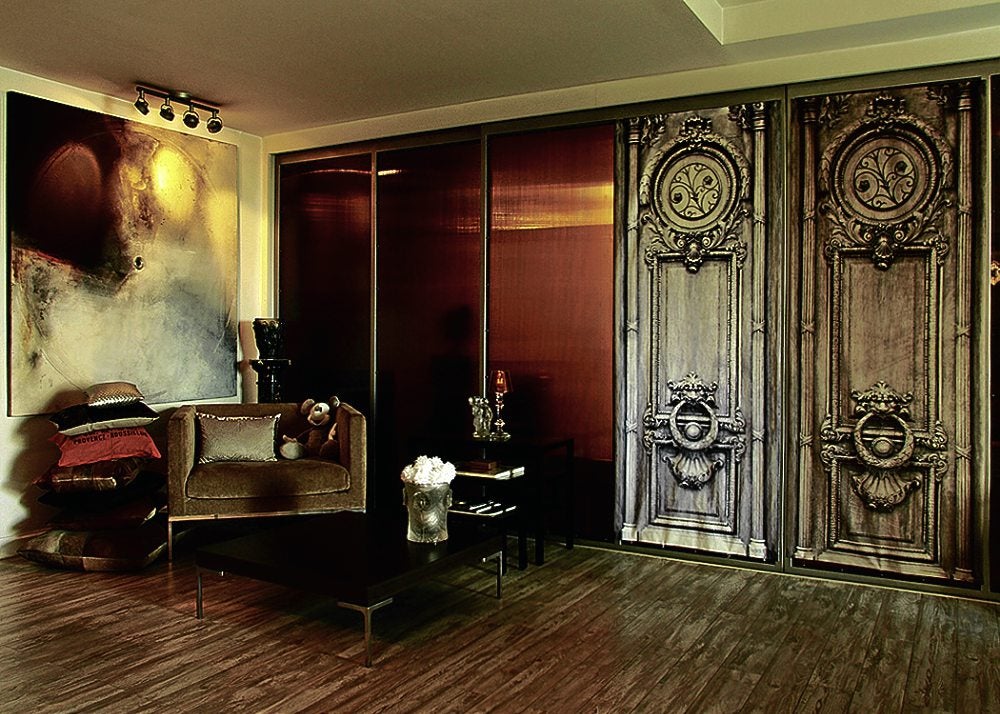 THE UNEXPECTED touch of the trompe l’oeil on the velvet doors lends a surreal effect.

How to achieve a look and ambiance using your art pieces

A Daum crystal of a head with a square cavity on the face is as much a symbol as it is a décor.

“It could mean being cerebral or not to think. It could also mean anonymity,” explains the owner, who asked to be anonymous here, pretty much like the obscure crystal object under scrutiny.

An inveterate traveler and an art enthusiast, he acquires objects for their visual impact, craftsmanship or simply as memorabilia of a journey. Thus, these  treasures become a personal story.

Eleven years ago, the owner acquired the 145-square-meter Makati condominium,  an empty shell waiting to be filled with comforting obsessions.

He admitted that he didn’t know much about art until he started moving in the arts circle and visiting galleries and museums overseas.

Over time, he accumulated crystals, busts, books, paintings and sculptures that form the bulk of his décor.

“This house is layered with Greco-Roman elements, surrealism and technology,” says the owner, referring to the smart appliances.

The design is a mix of modern, classical and the unexpected. The color palette—black, white, brown and gray—is calm and orderly. It is neutral enough to let his objects pop out.

The interior design is his personal statement; he chose objects and artworks that resonated with him. He recalls an early purchase: a Versace vase with arabesque patterns, a European decorative motif composed of curves and leaf tendrils.

Gradually he was drawn to other ceramics of similar classical influence, done in white or gold.

As his collection crowded the living room, many ended up in the bathroom in shelves made from stacked chairs.

Curiously, the house tour started in the bathroom which reveals rather much of the occupant.

On the bathroom mirror is written: “Pray tell me whose dog are you?”

To which the owner muses, “Ask yourself this question in the morning.”

Other bathroom mirrors are inscribed with quotes from Baudelaire and are whimsically embellished with plastic clouds and human figures. A little kitsch doesn’t hurt—the bathroom is laden with glistening Bisazza mosaic tiles and an Italian sink.

The walk-in closet is fastidiously organized into compartments. The occupant’s ties, shirts, pants and personal effects are displayed as if in a department store.

In the bedroom, the mirrored shelves add depth to his displays of busts and crystals.

Some surprise elements speak of practicality. The swiveling entertainment center in the bedroom could be turned around to face the dining room. That way, visitors can watch TV without entering the bedroom. Then there’s a cabinet originally customized for saucers that is used as CD rack to store the collection of ’70s music.

Amid this rather quirky décor, the owner acquired practical contemporary furniture from Ligne Rosé, B&B Italia, Bo Concepts and some customized pieces such as a low work table. In a surprise twist he combines disparate styles such as a streamlined B&B armchair beside an ornate acanthus-backed chair from Pampanga.

His fondness for classicism is reflected in the trompe l’oeil moldings on the ceiling and bedroom doors. More classical busts and Lladro, Baccarat and Daum vases are in clusters and displayed prominently in the living room and vestibule. They are not a clutter of disconnected objects. The owner does his research to establish their connections.

A ledge displays tiny busts created by Bertil Vallien, a glass art innovator. The owner didn’t buy them in one shopping expedition. He bought them in museums, gift shops and department stores. Playing with scale, he placed these undersized objects under a large painting of an elongated figure by Sylvain Tremblay. The commonality with the sculpture and the painting? They are both abstract human forms.

Most of the big artworks are abstractions of figures or amorphous colors. A prized possession, a sketch by National Artist Arturo Luz done in 1963, is prominently displayed in the living room. It is a study that combines Luz’s series of musicians, cyclists and geometric shapes.

The owner says the skills required to build a collection—reflecting, organizing and arranging—apply to the art of living. These facilities enable him to strive for comfort and security.