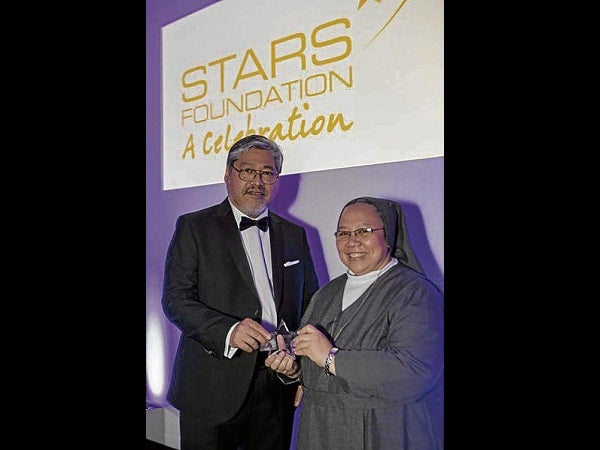 The Laura Vicuña Foundation (LVF) Inc., a group that helps abused children and those working in the sugarcane fields of Negros, won the 2012 Asia Pacific Stars Impact Award in the Protection Category in London out of 302 shortlisted from more than 1,000 nongovernment organization applicants.

Sr. Maria Victoria Sta. Ana, executive director of the LVF, on Saturday said she accepted the award from Ambassador A. Al-Dabbagh, founding chair of the Stars Foundation, at Kensington Palace in London on Dec. 15.

Sta. Ana said this is not only a great accolade to the Foundation and to the Salesian Sisters, but more to the country as this is the first time a Philippine NGO won a prize from this prestigious award-giving body.

“The Philippines is faced with a serious problem of 60,000 girls being sexually exploited and trafficked. This is alarming. More and more children are not even safe in their own homes,” Sta. Ana said.

The LVF helps heal the traumatic past of sexually abused girls by giving them psychosocial spiritual, life skills and educational support so they can move on, she said.

The prize money will be used to help build a bigger home for the healing and recovery of sexually abused girls as well as a training center and the offices of the foundation.

LVF won this international recognition through its pioneering Child Protection Clinic on Wheels, she said.

“While I was in London, I had the opportunity to tell Amr Al-Dabbagh about the importance of reaching out to children in their communities, schools and even homes which is why the mobile protection unit is so effective,” Sta. Ana said.

“We want to extend the reach of that unit to child laborers in the sugarcane industry. These children are at risk from hazardous labor, trafficking and sexual exploitation. Taking a second mobile unit out into the plantations where these children are is the only way that we can intervene now and offer them protection,” she added.

“I hope that our countrymen will also support our work and enable us to buy that second mobile for the sugarcane children who are at risk every single day. We want to help those children now,” she said.