Sweet and savory as ever | Inquirer Lifestyle ❮ ❯ 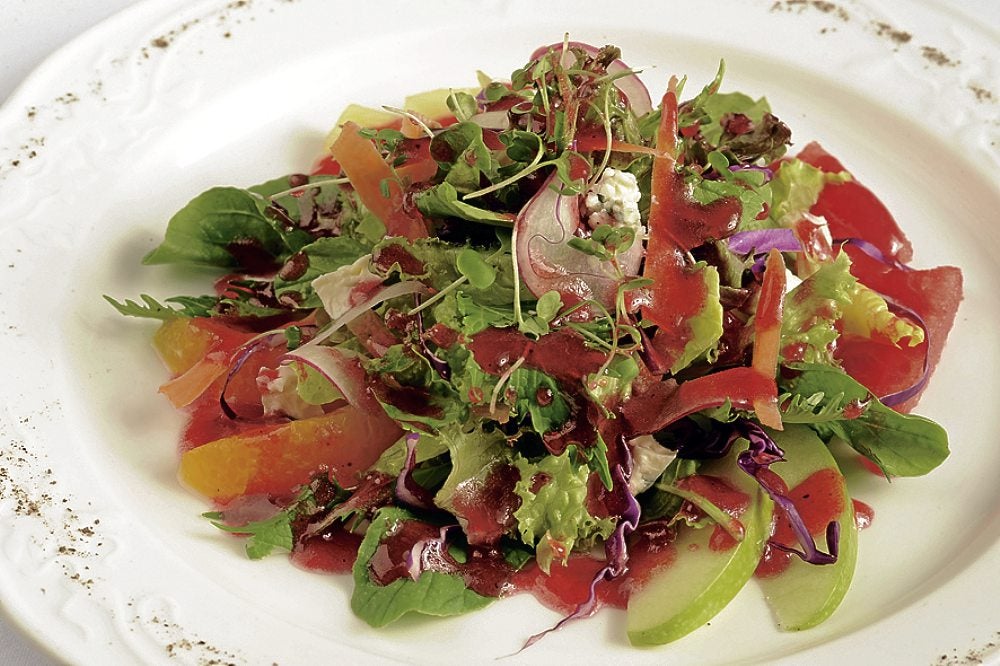 Sweet and savory as ever

Thirty years after breaking into the culinary scene and becoming a renowned chef and restaurateur, Jessie Sincioco shows no plans of slowing down. On Friday, Feb. 8, lucky guests who were able to book a table at Chef Jessie’s at the Amorsolo Tower in Rockwell, Makati City, can feast on selections of her a la carte menu at 50 percent off.

The one-day event is to celebrate the restaurant’s third anniversary since it changed names from Fernando’s to Chef Jessie’s.

So much has happened since Sincioco won in the baking category of the Great Maya Cookfest held at the InterContinental Hotel in 1983. After being cajoled by her aunt to join the contest, they worked on and perfected a mango cake that bagged first prize.

“I think that, aside from its look, it was the taste of the cake that won the judges over,” Sincioco said, explaining how she incorporated whipped cream into the sponge cake base that resulted in a creamier texture. “In all my readings, I still haven’t come across a recipe where these two ingredients are combined.”

Passport to her profession

Her entry not only won for her the top prize, which included a kitchen showcase and the chance to represent the country at the Philippine Independence celebrations in Japan that year. She was also the only one among the six winners—three for baking, three for cooking—who was offered by the InterCon’s resident manager a three-month training stint at the hotel’s pastry department.

“That was my passport to this profession,” Sincioco said. A month into her training, one of the kitchen staff resigned and she was offered the job, which she readily took.

“This was a time when all the members of the kitchen staff were male. The Swiss pastry chef was very strict, but we managed to get along because I think he liked how neat and precise I was,” she recalled.

“Whenever the chef would experiment on a new dessert, he would give me the recipe so I could prepare the ingredients. Everything would be in order down to the last ingredient.”

Only then would the chef and his unofficial assistant execute the dessert together. “That’s where I really learned,” Sincioco said.

Time to spread her wings

She worked for seven years at the InterCon. When she decided to leave and put up Le Souffle with several partners, Sincioco had become the InterCon’s first Filipino pastry chef, a rarity in those days since only expats held the top positions at the hotel chain.

For 19 years, Sincioco and her partners made Le Souffle a byword in continental dining and French-Mediterranean cuisine.

During this interview with Inquirer Lifestyle, she discussed her falling out with her Le Souffle partners and how everything came together again when she was offered to run Fernando’s at the Amorsolo Tower. “I was already planning to close Le Souffle in Ortigas because the landlord wanted to increase our rent by 25 percent. The moment I entered Fernando’s and saw the high ceilings, the big glass windows with a view of the pool, I thought, ‘This is beautiful. Maybe this is where we should transfer.’”

Everything happened fast when she agreed to run the restaurant. But first, Sincioco wanted the floor carpets taken off and replaced with tiles that approximated the look of wood. Likewise, the old, heavy chairs had to go in favor of rattan seats that lent the restaurant a resort-like vibe.

Open to the public

“I also requested that the restaurant be open to the public because my clients would look for me,” Sincioco pointed out. At the time, Fernando’s was exclusive to the 3,000-plus members of the Rockwell Club.

“Thank God all my requests were granted. Since I took over, the restaurant has been doing very well.”

So far, so good. In fact, this year, Sincioco is expected to open a revolving restaurant on the 33rd floor of a building in Eastwood City, Libis.

Asked what she would be doing if she didn’t win that cooking contest, she paused and said, “I’d probably be working at a bank. When we were younger, we would drive around Makati on weekends. I remember seeing all these banks on the ground floor of these high-rise buildings and wishing I could work there.”

Fortunately for us, Sincioco chose another path, one that is lined with all things sweet and savory. “I love everything about the kitchen because it serves as a platform for me to create,” she said.