A home or a gallery–or both? | Inquirer Lifestyle ❮ ❯ 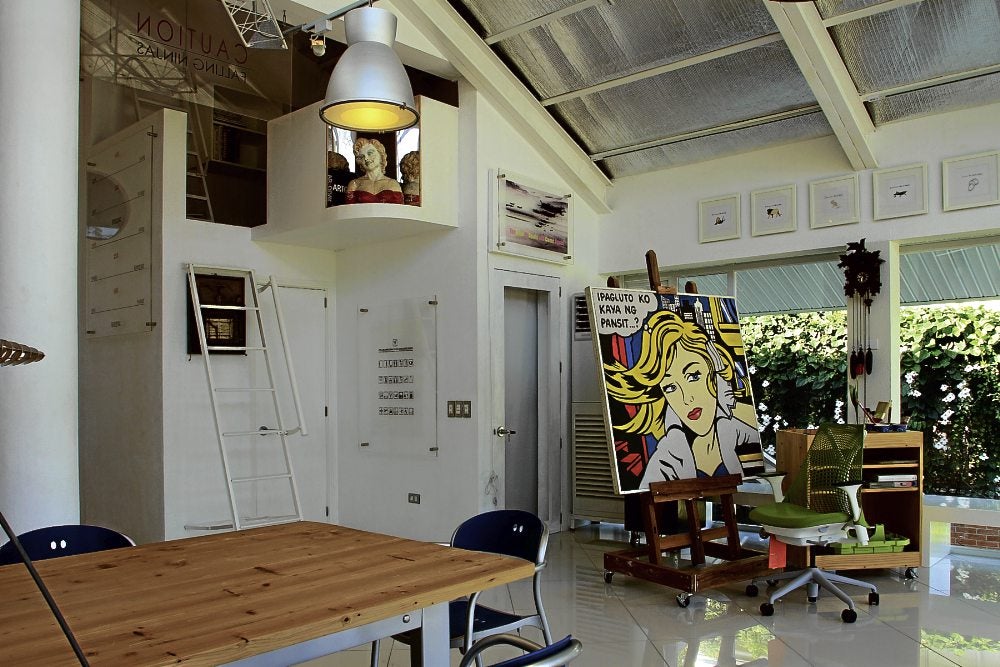 A home or a gallery–or both?

How we should view art, everyday objects and space beyond the norm is the design premise of the new Artlab of artists and provocateurs Cesare and Jean Marie Syjuco.

The four-level, 400-square-meter glass house in Ayala Alabang is a repository of the works of the Syjuco family. Behind the new Artlab is another building with studios of Jean Marie for mixed media; for eldest daughter Michelline to create her accessories; and art classrooms for another daughter, Maxine.

The palette is standard white for the gallery, but the bathrooms are black to avoid the antiseptic look. The ceiling is dressed in double bubble foil, and rafters and perlins are exposed for an industrial effect.

“Artlab is a developmental facility,” explains Jean Marie. “Art appreciation can be challenging if you’re just assigned to read books or if you go on field trips to galleries once a year. We want to build a bigger audience for art. Here, our neighbors are our guests. This is meant to be an eye-opener about the bigger picture. Art is not just oil paintings on canvas. They will be exposed to other genres—installation art, performance art and video.”

In the ’80s, the Syjucos were proponents of Postmodernism. Cesare became known for his literary hybrids, works that draw elements from the visual arts to give new meaning to literary influences and vice-versa.

Jean Marie was known for her riveting performance art. It is a genre in which the artists play out roles or ideas with spontaneous but stylized gestures. The viewers must either be close or directly involved in the happening. Thus, both the literary hybrid and performance art challenge the conventional notions of art and reality.

Artlab embodies this concept. It blurs the distinction between a gallery and a house. Jean Marie says they accumulated so much artwork in four decades that they built a new abode beside their residence for this purpose. Hence, their artworks become everyday objects, while the pieces of furniture become art.

For instance, Cesare’s chair, which he used when he was 2 years old, is built into the ceiling of the foyer. On it is inscribed “Aut Caesar Aut Nihil” (a king or nothing). The toddler chair with Latin text becomes a statement about the owner.

Space is not just for viewing, as is the function of a gallery. The spaces are like the usual parts of a house. A multimedia corner, furnished with chairs inspired by Dutch designer Gerrit Reitveld, provides video showings of Jean Marie’s vintage performance-art rituals.

The kitchen and bar are flanked by the couple’s artworks. The colors of the pieces match the countertops.

When Cesare wants to take a rest from painting, he can repair to the master bedroom. While lying down, he can review his works. And, if the Syjuco children have visitors, they can hang out in the bedroom without the clutter, says Jean Marie.

A guest bedroom is furnished with a knock-off of the Syjucos’ Forty Winks bed; the bed frame is made from recycled material.

The house redefines our notion of the bathroom. They are dramatically clad in black granite, an unconventional material and color. One bathroom holds Jean Marie’s tribute to the Fukushima Daiichi nuclear-plant disaster during the earthquake in Japan in 2011.

God of the sea

So as not to waste space, a sand garden is installed under the bathroom counter. It holds an image of the Japanese god of the sea and rocks. Both installations are allusions to nature’s wrath. Thus, the visitor will rethink the bathroom as a space for “natural disasters.”

While the attic is conventionally used for storage, Artlab goes beyond making it a library of art books and magazines. It will serve as an “installation space for words.”

Perched on the attic is “Marilyn in Dispose,” Cesare’s icon of a rotting Marilyn Monroe. It overlooks one of Cesare’s paintings, which appropriates Roy Lichtenstein’s pop art of a blond Filipina who thinks of cooking pancit.

The music room has Jean Marie’s table of a clock with no hands and Italian designer Fabio Novembre’s butt chairs. The focal point is Cesare’s literary hybrid of a firing tank, titled “Tipping in America.” It playfully greets, “Have a swell day.” These disparate subjects create the impression of the Syjucos’ collage-like manner of decorating.

“Literary hybrids are literature for walls and art pieces,” adds Jean Marie. “We have a lot of narratives in this house.”

In conventional houses, rugs are used to dress the floor. For Jean Marie, the floor becomes the fifth wall. Her assemblage of random pinewood frames and mirrors, titled “A Love Unfurled,” invites the viewer to look down and see fragmented images. This makes us realize the fragility of love.

Jean Marie does her take on decorating with flowers. An installation of cascading silk red roses is inspired by E. E. Cummings. Dubbed “Nobody, Not Even the Rain Has Such Small Hands,” it is the subtitle of the poem “As the Rain.”

The roses evoke the phrase “i do not know what it is about you that closes and opens/ only something in me understands/ the voice of your eyes is deeper than all roses.”

Ultimately, Artlab asks us to question what we believe is beautiful, and how we interact with the spaces and their content.