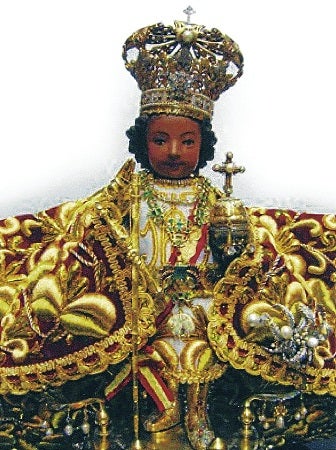 STO.NIÑO de Romblon is back at the St. Joseph Cathedral in the capital town of Romblon province after 22 years.

The Diocese of Romblon has reason to be happy these days. Last Jan. 29, the stolen image of Sto. Niño de Romblon was recovered. An antique collector from Kalibo, Aklan, had managed to get hold of it and showed it to a priest from Romblon, who immediately recognized it as the image that had been stolen in 1991 from the Romblon cathedral.

To verify its authenticity, a church worker from Romblon who used to dress up the image during fiestas was brought to Kalibo to positively identify the image.

Without asking for payment, the antique collector turned over the Sto. Niño to Romblon Rep. Eleandro Jesus Madrona who brought the image to his house in Quezon City. The lawmaker later brought it to the “Sambugan” festival on Feb. 3 at La Playa Resort in Tanza, Cavite, where Romblonanons gathered to welcome the Sto. Niño.

To celebrate the Year of Faith, the theme of this year’s 25th Eucharistic congress  is “The Holy Eucharist in the Year of Faith.” The Eucharistic Adorers’ League and the Pink Sisters are holding the congress on March 9 at St. Joseph’s Convent on 71 Hemady and 11th Streets with Luis Antonio Cardinal Tagle officiating the concelebrated Mass.

Registration starts at 6:30 a.m. with the first talk at 8 a.m. and will conclude with the celebration of the Holy Eucharist at 4:30 p.m.  Cubao Bishop Honesto Ongtioco will lead in the   adoration and procession of the Blessed Sacrament at 1 p.m. Everyone is invited. Registration, lunch and snacks are free.

Conversion to the Lord

Pope Benedict XVI describes the Year of Faith as “a summon to an authentic and renewed conversion to the Lord, the One Savior of the world” (Porta Fidei, 6).

And the celebration is intensified with the call for New Evangelization which was the governing theme of the Synod of Bishops last October in Rome wherein Cardinal Tagle participated.

The University of San Agustin (USA) in Iloilo City is marking the 60th anniversary of its declaration as a university on March 1, said Fr. Harold Rentoria, OSA, vice president for academic affairs.

Although USA is more than 100 years old, it was declared a university in 1953, said Rentoria.

Cebu Archbishop Jose Palma, president of the Catholic Bishops’ Conference of the Philippines, will lead the Eucharistic celebration at 9 a.m. at the university gymnasium. He will later bless the auditorium and registrar’s office.

At 1:30 p.m., there will be a roundtable discussion on the history of USA. Discussants are Fr. Eusebio B. Berdon, OSA, prior provincial of the Province of Sto. Niño de Cebu; Fr. Arnel Antonio S. Dizon, OSA, VP for academic affairs of Colegio de San Agustin in Biñan, Laguna; and Jose G. Espinosa Jr., retired professor of USA.

Afterward, there will be the unveiling of the miniature “Garden of Firsts”; launch of the search for outstanding alumni; and brief presentation on USA’s philanthropic office.

At 4:30 p.m., there will be the demonstration at the USA football field. The closing ceremonies at 6 p.m. will be capped by fireworks.

USA is run and managed by the Augustinian friars, the first missionary order to arrive in the Philippines in 1565 and who led the dramatic Christianization of the archipelago.

The annual Lenten exhibit “Cuaresma,” organized by the Hermandad de la Sagrada Pasion de Jesus, is ongoing until March 3 at the historic San Agustin Church in Intramuros. Last Friday, Feb. 22, at 5 p.m.,  the exhibit opened with the ceremonial opening of the Church Portal, sprinkling of the holy water and incensing of the images followed by the Holy Mass.

The “Estacion de Cruz General” was brought along the streets of Intramuros. Also in the procession were Poong Jesus Nazareno from Tondo and Nuestra Señora de la Soledad de Porta Vaga from Cavite City.

Participating were members of the “Handog Family Nazareno Group of Tondo.” The  exhibit is open to the public.

The exhibit showcases sacred art and religious artistry while fostering greater awareness and understanding of the public life, passion, death and resurrection of Christ.

The exhibit is staged on the side chapels of the church to inspire visitors to pray and meditate upon the virtues depicted by the holy images.

The Hermandad de la Sagrada Pasion de Jesus would like to thank the Augustinian Community of Intramuros for once again hosting the exhibit.

Blessings to Bishop Dinualdo Gutierrez of the Diocese of Marbel who turned 74 last Feb. 20.

Nine schools in South Cotabato participated in the recent National Jamboree of the Boy Scouts of the Philippines held in the Philippine National High School in Makiling, Laguna, said Fr. Ampoyas.

Gov. Arthur Pingoy is the honorary chair of the Boy Scouts in South Cotabato.

St. James Academy’s vision-mission is to live the Gospel values as a community in pursuit of academic excellence at the service of the people of God with preferential option for the less fortunate.

Awards to other alumni were given last Jan. 19 during the grand  homecoming reunion.

Our Lady of Medjugorje