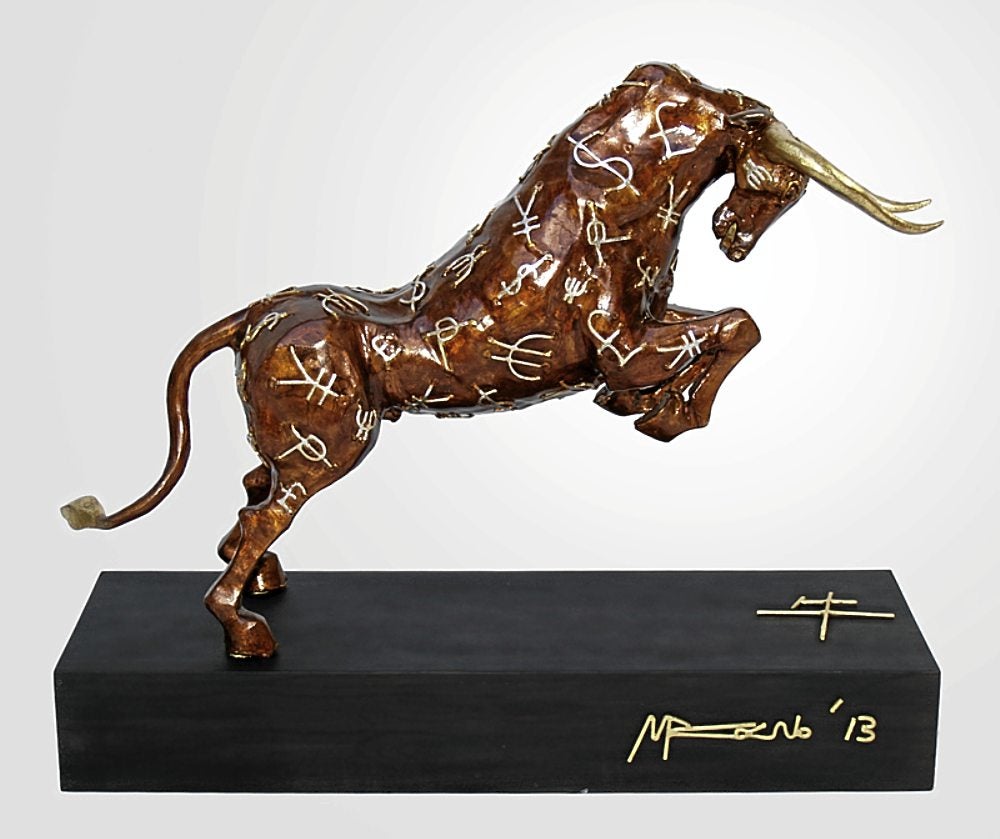 Most people are surprised to know that renowned sculptor Michael Cacnio is a pastor who has been involved in the Christian ministry for the past 25 years.

Guided by faith and Scripture, he has established a reputation for being one of the country’s leading figures in brass sculpture in  a  career that spans over two decades.

In “True to Form,” his latest exhibit at SM Megamall’s Gallery Nine, Cacnio weighs in on popular faith, folklore and fortuity through an arresting assemblage of characters inspired by the Chinese zodiac.

It’s a peculiar choice of subject, given the artist’s religious background, but rendered nonetheless with Cacnio’s trademark playfulness and attention to detail.

“The Chinese influence is very evident in the Filipino way of life,” says Cacnio, whose wife, Tess, is half-Chinese. “From romantic compatibility to spatial design management, people refer to Chinese signs and rituals in their pursuit of fortune and happiness,” he adds.

Although steadfast in his Christian faith, Cacnio admits to a cultural and artistic curiosity for superstition and popular-belief systems.

According to one  Chinese legend, the Buddha summoned creatures of the animal kingdom to his temple. The animals, using a combination of skill, cunning, mischief and virtue, raced their way to the palace. The order in which they arrived determined their place in the Chinese zodiac calendar. The rat arrived first, followed in order by the ox, rabbit, tiger, dragon, snake, horse, ram, monkey, rooster, dog  and pig.

The animal year under which a person was born is called his or her benming nian.  It is believed  the animal year affects a person’s character in the same manner astrological signs do in the Western zodiac.

Cacnio was born in 1969, the Year of the Rooster, which is coincidentally an iconic element in his own oeuvre.

As a child growing up in Malabon in the 1970s, Cacnio remembers the wild revelry of the traditional Filipino sabong.  These cockfights also graced many of the paintings of his father, Angel Cacnio, master-painter of Filipino folk culture and traditions.

Although familiar with the rooster, the exhibit presented Cacnio with the challenge of working on other animals he had not previously sculpted.

“It was difficult because each animal has different characteristics in terms of texture, weight and proportion,” he says.

For this exhibit, Cacnio renders the rooster in his trademark style of three-dimensional patchwork in brass, giving it a quiet  air of pride and confidence. The monkey, in Cacnio’s zodiac, navigates a branch, nestled within intricate foliage.

The snake and dragon seductively slither, mimicking the infinity symbol thought to bring luck and prosperity.

This collection also showcases Cacnio’s experiments with the more traditional and laborious technique of casting. In his depictions of the dog, ox, ram and horse, all rendered in this mould, the artist achieves the well-measured equilibrium between force, strength and grace.

His dog, as such, is alert, loyal. Both the ox and ram are handsome, fierce, but not brutish. The horse, more figurative this time than in previous renderings, is wild and free. 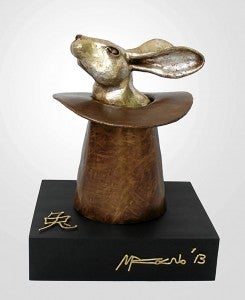 At 44, Cacnio displays the jovial countenance of a 25-year old. Many of his works are depictions of the humorous and whimsical. In his latest collection, the artist re-imagines some of the more popular signifiers of superstition.

Thus, the piggy bank becomes the pig that jumps out of a coin; the rat is a found object that resembles a computer mouse; and the rabbit is stuck inside a magician’s hat.

The show’s undoubted centerpiece, however, is the tiger, which the sculptor vests with a profound sense of intelligence and subdued but dangerous energy.

In “True to Form” Cacnio exhibits a propensity for trying out new things, for going out of his comfort zone both technically and thematically. Thus far, he has incorporated colored glass, light, and even Lego bricks in his sculptures.

He has also not shied away from social realism, conjuring sculptural introspections on such subjects as despair and social inequity.