Patrick J. Adams on mangoes, pot, and why his lawyer TV role has his mother laughing | Inquirer Lifestyle ❮ ❯ 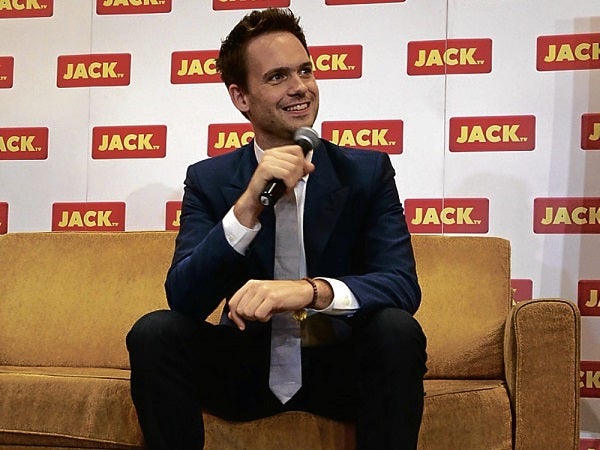 Patrick J. Adams on mangoes, pot, and why his lawyer TV role has his mother laughing

Actor Patrick J. Adams may not have the extraordinary photographic memory of Mike Ross, the young associate he plays on the TV series “Suits,” but his own mental faculty is pretty good. “Can I say something first before we say goodbye? It’s someone’s birthday over here,” he says, looking at his “Suitors”—the collective name his fans have given themselves.

“Can we all say ‘Happy Birthday’ to, what’s your name again?” he continues, addressing the (lucky) celebrant. “Kyoy,” she answers.

“Kyoy? Oh, I do remember you on Twitter!” exclaims Adams. “K-Y-O-Y,” he repeats, spelling out her name in recollection, no easy feat for someone with over a hundred thousand followers. “We hugged before, we’ll hug again,” Adams promises.

He is easygoing and chatty. “I’ve actually been here once before, to Cebu when I was 15 or 16. It was a family vacation. My father was a journalist so he likes to travel to places that are off the beaten path.”

The first thing Adams did upon arriving here was to eat mangoes and then tweet about it. “So much mangoes. It’s so good. I haven’t had balut yet, though. How many people here have had balut? Not excited. Not excited at all,” he says.

This was the tone he set for his press conference organized by Jack TV. Adams’ customary, crisp lawyer suit was nowhere to be seen, replaced instead by a more casual Marc Jacobs jacket, a shirt, a gray tie, dark jeans and suede lace-up shoes. “I’m a T-shirt and jeans guy, but I’ve started to love wearing suits and I feel like I’ve started to learn how to wear them. I’ve had people comment how uncomfortable I was with it in the first season—I’d stand like a sullen little boy—but I’ve begun to learn mostly by watching Harvey Specter (played by Gabriel Macht) ’cause he just walks around in a suit like he was born in it,” he says.

In character as Mike Ross, Adams is earnest, funny and likable. As himself, doubly so. At the start of the press con, journalists were reminded to refrain from asking personal questions, yet Adams managed to answer the more private ones thrown at him, with affable charm.

“I notice that you’ve had a couple of hot and heavy scenes with girls in ‘Suits,’ doesn’t Troian get jealous sometimes?” one reporter asks. Troian Bellisario is Adams’ longtime girlfriend who was also in Manila to promote the mystery-thriller TV series “Pretty Little Liars” (she plays Spencer Hastings). The couple had been touring around Singapore and Malaysia before arriving here.

“Does Troian get jealous?” Adams laughs. “No, she doesn’t. We do this for a living. It’s a very strange job. You can’t imagine how unsexy these scenes are when we’re doing them. Fifteen crew guys who are sweating, holding up a boom mic. Imagine making out with so many people watching. It’s uncomfortable, it’s not intimate. I think Troian and I, being both actors, know it’s not real. And we also trust each other, so that helps.”

His role as a lawyer on a TV series means wearing suits for 16-hour days, the irony of which is not lost on the actor. “I never wanted to become a lawyer. My mom wanted me to become one because when you tell a mother that you want to be an actor, they stare at you blankly for a long time. She wanted me to be wearing a suit every day and I said to her, “I am never going to wear a suit every day. Never gonna happen, don’t even try. So now she’s laughing.”

But he did try lawyering in real life once. “I’ve given legal advice, that’s what I do. Now that I play a lawyer on TV, I just dole it out like I know what I’m talking about. I actually almost represented myself. I have a scooter and got into a little accident with a city bus. It sounds much worse than it is, but I got really hopped up and thought, ‘You know what, I play a lawyer on TV. I’m gonna learn it, I’m gonna go in there and stand my ground.’ I got about five minutes into the research of what was required and I was like, ‘OK, I can’t do this. Let’s pay the fine and get out of here.’ Being a lawyer is more difficult in real life,” he says.

While his first (and last) attempt at self-representation didn’t go so well, he’s got the diplomacy of a seasoned barrister, especially after being asked by a reporter about smoking pot and being invited to share his own anecdotes about marijuana. “I’m sure a publicist somewhere is freaking out about this question,” he laughs. “I’m a Canadian, I’m very excited, interested and invested in the forward momentum of legislation in the States. I’m older and busier now, so my heydays are behind me. College is over, so it’s not something important to me on that level. But I do think legislatively it’s something to think about: The legalization or at least the decriminalization of marijuana …”

This openness is not just for show. He shares the same rapport with co-star Gabriel Macht. “Gabriel’s incredible, he’s such a great guy, he works really hard and he’s very supportive,” Adams confirms. Their well-dressed bromance onscreen translates off-screen as well. “In the beginning of the show we both said, “You know these are long hours, you can get really overwhelmed, and people can start really acting out. There’s a reason that there’s a stigma on certain actors on shows kinda becoming divas, and we both really sat down with each other and said we both wanna avoid that at all costs and just make sure that if we do start heading in that direction, we’ll both catch each other, just stay humble and enjoy the process. He’s become a real brother throughout the whole process, we’ve become very close.”

And just like brothers, Adams can’t help but add, “I like to make fun of him all the time. I’m trying my best not to do it here now,” he trails off before adding, “He wears sandals. He wears Birkenstocks!”

Despite Macht’s role as Harvey Specter, the tough and calculating law firm senior partner, Adams says that he and Macht are more like Mike Ross. “Who’s really like Harvey Specter? I have a lot of similarities with Mike though. We’re both those guys who are trying to find the good in things and trying to do what’s right,” he says.

A nomination at the Screen Actors Guild Awards and crazy fans aside, Adams doesn’t let the fame get to him. “Troian and I laugh about this, because people think when you’re on a TV show you’re just spending money on all these stuff and we’d go to Urban Outfitters and go, ‘Twenty dollars for a T-shirt?!’” he says in disbelief. “I did buy a wool blazer last year that was way more money than I could imagine spending on something, and it felt really silly but I’ve worn it about a thousand times,” he adds.

Press con ends with a surprise for Adams from the Filipino “Suitors,” who give him a cake which came with a back story. “It was my birthday and they asked me on Twitter what my favorite kind of cake was,” he says. “Look at that, it says ‘PJA Day’ on it. I’m gonna eat the whole thing so none of you can have it,” he jokes.

The “Suitors” also brought “gifts of worship,” a scrapbook they made and a tiny Mike Ross doll, which Adams promptly put on his jacket’s front pocket for display. I’m actually dressed like him right now. It’s sad and strange,” he says.