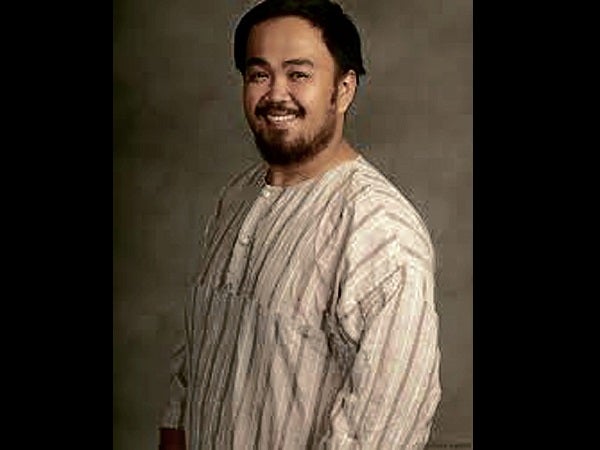 Jonathan “Tad” Tadioan considers his breakthrough role of the tormented Boy Pogi Resureccion in the play “Doc Resureccion: Gagamutin ang Bayan” (written by Layeta Bucoy and directed by Tuxqs Rutaquio) as his first major challenge in Tanghalang Pilipino, the resident drama group of the Cultural Center of the Philippines.

The TP-Virgin Labfest production was first mounted in 2008 and restaged last year at the CCP’s Aurelio V. Tolentino Theater.

In the play, Doc Resureccion (Riki Benedicto), a wealthy politician, attempts to seduce his cousin Boy Pogi, a bitter and economically depressed fisherman, with money and promises of a better life. When he realizes he is being used, Boy Pogi kills his cousin.

Tadioan—the “o” is pronounced as “w”—found it hard to relate to the character. Could this be true? Could someone just kill his cousin? He asked the writer and learned it was based on an incident involving cousins, except that the killing was accidental.

He also went to the Coastal Road in Parañaque City and observed the fisher folk there for two days. And with the help of the director, he eventually understood why the character behaved that way.

The actor considers the play timely, in view of the coming elections: “Will you vote for these people? Know your candidates, or might as well not vote. I have voted many times in the past and nothing has happened. If we have progressed, it’s due to technology, but there are still many poor people around.”

Again he felt the pressure, for the role of Mitch was originally played many years ago on the Peta (Philippine Educational Theater Association) stage by, in his own words, “the great Mario O’Hara.”

He didn’t see this production, nor did he look up the classic film with Brando and Vivien Leigh “because I wanted to contribute something new to the character, I wanted my own interpretation of what Mitch really is.”

Preparing for the role, he decided to shed off some pounds and look clean-cut. Analyzing the character with director Floy Quintos, he would think: Why did Blanche like him? What did she see in him—the way he thought, conversed perhaps? Maybe he was a mama’s boy?

“You know, there’s a saying that it’s easy for a woman to like a mama’s boy,” he mused.

Tadioan had not yet worked with Valdes then, and he wondered how he could interact with her. But soon they got along fine professionally, and he even kissed her even if it was not in the script! Kidded about this by his colleagues, he rationalized, not too convincingly, that it was the character Mitch who kissed Blanche and not him.

His big moment in the play came near the end, when Mitch, influenced by the intrigues of Kowalkski, rejects Blanche, gets drunk and suffers a breakdown (and later becomes conscience-stricken when she goes mad).

The actor also worked with A-listed actresses Ana Abad Santos and Frances Makil-Ignacio in Floy Quintos’ absurdist one-act play “An Evening at the Opera,” again for the Virgin Labfest. It was all about a governor’s wife insisting on bringing opera to a depressed province (shades of Herzog’s “Fitzcaraldo”!).

Tadioan was properly intimidated (“my first time to work with these—wow, wow!—actresses”) but the director’s faith in him sustained him.

“It was such a heavy responsibility,” he recalled. “The play was written for the three of us. It scared me, it was the scariest thing…”

Tadioan is currently appearing in Tanghalang Pilipino’s “Ibalong the Musical” (on at CCP’s Tanghalang Aurelio V. Tolentino until Sunday), and he has another supporting but big role. He is cast as Aswang, the leader of the Halimaws, who are not actually monsters but denizens of the forest, which is being decimated by the humans in the name of progress.

In the middle of the play Aswang dies, leaving to his half woman-half snake daughter Oryol (Jenine Desiderio), the choice of fighting on or coopting with the humans to help save the forest.

“I have always been thankful to those people who believe in me, who made me feel I can do what they expect of me,” says the unassuming actor. “First of all my directors; also Tata Nanding (Josef, TP’s artistic director) and Tuxqs, who now guides the Actors Company.”

He concludes: “We are working all together to bring back the glory days of Tanghalang Pilipino. Yes, there are some shows that are not that good, but there are those we are very proud of—guided by

the vision, the original objective of Sir Nonon Padilla (TP’s founding director) who first set up the Actor’s Company for Tanghalang Pilipino.”