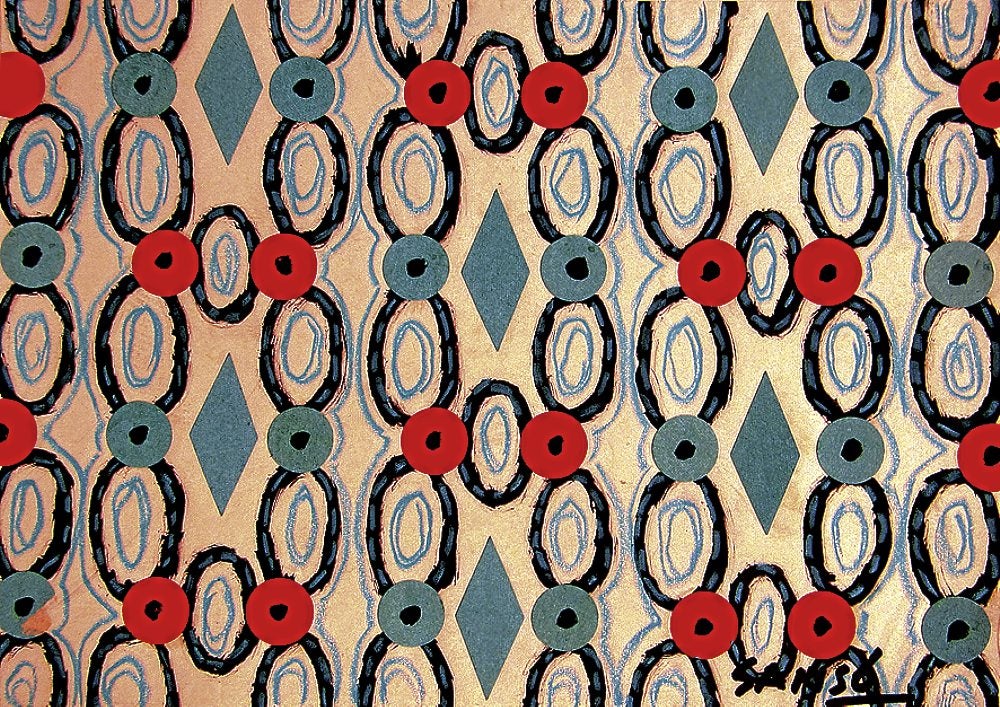 “A QUIET Elegance.” Below: “Poetic Essence”

Because he’s renowned for his expressionist representational works of eerie landscapes and fantastic flora, Juvenal Sansó is little known for his abstraction.

Now his abstract works will be on exhibit in “Fundamental Sansó: Abstract Paintings from the 1960s,” consisting of artworks and designs he did in the 1960s.

Opening March 9 at The Gallery (2/F, Greenbelt 5), the exhibit is organized by AltroMondo Gallery and Galerie Joaquin.

Sansó came to the Philippines when he was 4 years old. After World War II, he took up Fine Arts at University of the Philippines. Among his teachers were National Artists Fernando

In 1951, Sansó won First Prize in both the Oil and Watercolor categories of the Art Association of the Philippines Art Contest, for his expressionist “The Sorcerer” and  “Incubus.”

He went to Europe to study at the Academia di Belle Arti in Rome and L’Ecole Nationale Superieure des Beaux-Artes in Paris.

But it wasn’t all that rosy for the intrepid painter. There was a time when it was so difficult for him during his early years in Paris after his studies.

“I was staying in a studio on the fourth floor of a building,” he recalls. “It had no toilet, except the common one on the ground floor. And I remember going through one of the coldest winters in France and I was down in bed with the measles and I could hardly move. I felt so miserable.”

Sometime in the ’60s, the Philippine Central Bank started limiting foreign exchange from leaving for abroad. Although the Sansó family owned the leading wrought-iron furniture company in the Philippine, Arte Español, all that his parents were allowed to send to Sansó in Paris was $200. At P4 to $1, this meant his allowance was only P800 per month.

“I was doing different kinds of art. Fortunately I had a portfolio of abstract art and designs,” Sansó says.

A friend recommended him to an agent in Paris who started contacting design and fashion houses. His designs clicked and these abstract works became those used by top fashion and design houses for their textile products. This helped Sansó get through financially.

“There were so many considerations in making these artworks,” Sansó recalls. “Aside from doing every design by hand, there were the seasons to consider. Remember in Europe designers have to take into account the four seasons. Then there were the color palates and patterns being requested by the fabric producers. We also had to take into account the size of the roll so that the patterns would adjust to the size of the roll.”

He has horror stories from those times. He says  one big design firm stole his designs by taking photographs of them through a one-way mirror.

But all in all he found success with top design houses such as the Italian Bianchini-Ferrier, and the Swiss Synergie.

His biggest success, though, was when the House of Balenciaga, one of the major names in the fashion industry, commissioned Sansó to do an entire collection for them in silk.

The fashion house was owned by the legendary Cristobal Balenciaga, also a Spaniard and widely admired by fashion greats like Yves Saint Laurent.

The money that Sansó earned from his designs for Balenciaga kept him going for several years, which allowed him to study fresco painting and later accept fresco commissions for several villas in Europe.

It is now these abstract artworks from the 1960s that Sansó is showing in exhibition.

“I kept them with me as my collection,” Sansó explains. “But I felt that with the robust energy in today’s design and fashion industry and the vibrant Philippine art scene, now is a really good time to show them.”

“Fundamental Sansó” is a fund-raiser for the Hero Foundation, which provides education support for the children of the Armed Forces of the Philippines.