After the jumping shots, there’s planking 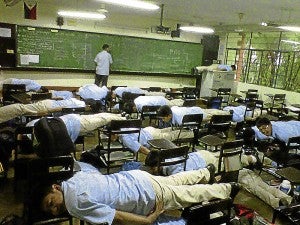 I think Wikipedia put it best when they put “(fad)” beside their entry on planking.

I first encountered planking under a different name—the lying down game. I was following Ellen Page’s Facebook feed when she posted some photos of her stiffly lying face down on things like a low flight of stairs, a shopping cart, and a pile of garbage.

I thought this is incredibly stupid, whimsical, and funny. I looked it up on the Internet and discovered that it’s a sort of international web craze. I did what any person of my generation would do: join in.

A month or two later, I tried it at a Christmas office party. My locations were a bit tame: a hallway, the top of a cooling vent on the roof of the compound, and on top of a divider of cubicles on the third floor.

I planked every month in an effort to sustain a healthy amount of mild insanity, zaniness, and weirdness in the humdrum of the daily postgraduate life.

It wasn’t just the act of planking that really got you, but those precious moments when you and your friends are laughing your heads off at how funny the pictures are and, strangely enough, the expectation that these photos will get you hundreds of comments and likes on Facebook. Chances are, you will get them. 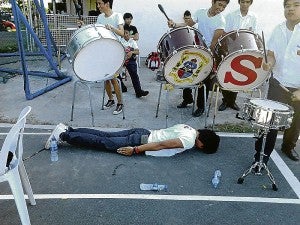 Most of these comments will probably tell you how cool and “rad” these photos are, a few might say “This is art!”––In which case, unfriend them––while some would say it’s dirty and ridiculous. And the latter are right, because it is, and that’s the charm of it.

And like every popular thing, it’s when everybody seems to be doing it that the novelty wears off, so I stopped. I figured the human body in action is more fun captured in photographs.

Planking (not to be confused with the exercise that involves holding a difficult position for extended periods of time) is the act of lying face down for a photograph.

The term “planking” is originally from Australia, and is just another name for “the lying down game.” Its origins can be traced to a number of claims, none of which have been confirmed.

The mechanics of the game? Lie face down on weird, difficult places (the weirder and more difficult, the better), take a photo, post it on Facebook, and pray that it gets a lot of hits, because planking alone is not planking at all.

There’s a website devoted to the stuff (lyingdowngame.net) and an official Planking Facebook page with 643,481 fans, and counting. Here in the Philippines, I’ve encountered a Facebook page for students of the De La Salle University– Health Sciences Institute called De La Salle-HSI Planking. 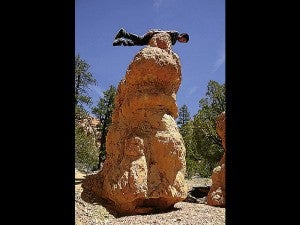 Planking here at home was featured in “Kapuso Mo, Jessica Soho,” and was used as a form of protest by student activists, a few days before the State of the Nation Address, against President Aquino. It was to demand for a higher budget for education.

It has now become a game of who gets to plank on the weirdest and even most dangerous locations as a test of a planker’s “skill,” “creativity,” and “bravery.” Just last May, an Australian man fell seven stories to his death after planking on an apartment balcony in Brisbane, Australia, jolting the planking community to think how far one should go for “harmless fun.”

A  new craze hit the web in response to planking. It’s called “Owling,” which is basically just squatting, but with mechanics similar to planking. Just squat on any “inventive” place, like Batman or Spiderman would on top of buildings, take a photo, post it on Facebook.

There’s another one called leisure diving, just in time for the western summer. Just dive in a pool in a most leisurely way and get a photo of it snapped while airborne. There’s the drinking coffee dive, the reading a newspaper dive, the sipping some wine while wearing a suit dive, watering the plants on a summer’s day dive, etc. It’s hilarious. (Check out www.leisuredive.com.)

I trust that within the next few years, we would see a lot of different social media trends in the photography department come and go, increasingly getting weirder (and perhaps more idiotic) as time goes by. So why not try sitting and standing? They never go out of style.