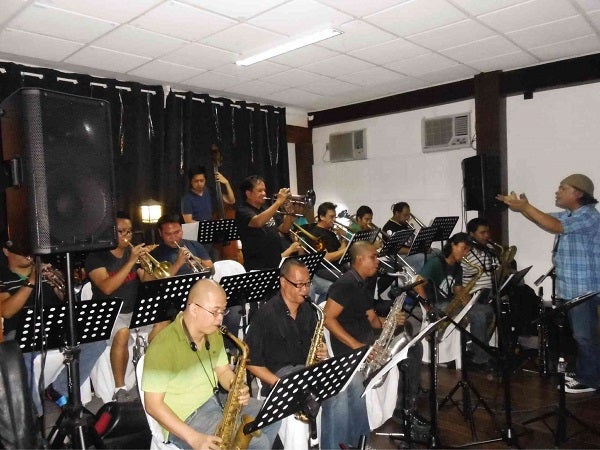 MUSICAL directorMel Villena (in cap, right) conducts the 19-piece AMP Big Band which is composed of some of the country’s best session musicians including Tots Tolentino, Michael Gueverra, Nestor Gonzaga, RonnieMarqueses and Simon Tan. Their next gig at [email protected] is on March 18. POCHOLO CONCEPCION

Jazz in the city

Jazz gigs—and we mean the exceptionally good ones—may be found in the most unlikely places around town.

For a long time, the Manila Hotel had been getting bad press because its new owners seemed to have thrown its once glorious history out the window with the way it ran the place. And the prospect of watching live music, a jazz performance, for that matter, in the hotel was totally unheard of—until last year when management launched Jazz at the Tap Room featuring some of the country’s best musicians and singers performing nightly.

That masterstroke revived the spirit of Manila Hotel’s golden years during the prewar era until about the 1950s, when the likes of the Tirso Cruz Orchestra and other big bands regaled the crowd at its Winter Garden club.

This time, the action takes place at the Tap Room—a lounge with Old English pub-inspired interiors. It’s very cozy and accommodates only about 60 people.

The featured act on the Friday night that we visit is a quartet composed of pianist Tess Salientes, bassist Dave Harder, drummer Jorge San Jose and vocalist Jeannie Tiongco.

The music it plays, which bandleader Salientes describes as “joyful jazz,” is a refreshing journey back to the heyday of Tin Pan Alley. Hearing such standards as “My Favorite Things,” My One and Only Love,” “They Can’t Take That Away from Me,” “Summertime,” among others, played acoustic-style is like taking a walk back to a world where time does not fly, but rather coasts along on a leisurely pace.

Salientes shakes her hips while tickling the ivories, apparently having fun while egging on her bandmates to enjoy this nostalgic ride. A balikbayan who went to the United States in 1974 to study at the Berkeley College of Music and went to live in America for the next 31 years, Salientes looks very glad to have taken a break from her corporate jobs to pursue music again.

The rhythm section of Harder and San Jose provide light but snappy accents to the songs. Harder is a relatively young Pinoy who’s been immersing himself deeply in jazz, while San Jose is a veteran musician adept in all genres including classical.

Tiongco’s honeyed voice provides a delightful kick to the songs. A daughter of Emil Tiongco of the legendary vocal trio Tiongco Brothers, she sounds like an old soul frolicking in jazz wonderland.

We relish our San Miguel Pale Pilsen as the band plays “I’ve Got You Under My Skin,” “Lullaby of Birdland” and “Too Close For Comfort.” And then Salientes sneaks in a couple of pop hits which, she says, harks back to her youth: “More Today Than Yesterday” and “All Is Fair in Love.”

The beer is priced at P200 like in most hotels; we lose count of how many bottles we’ve had. That’s what happens when one sits back and enjoys cool music.

Meanwhile, a suburban house at 175 Kamias Road Extension in Quezon City has been transformed into a dining place by day and a live music venue on certain nights of the week.

The place, called [email protected] as a nod to the old balete tree at its garden, is jumping on a jazz groove on a Monday night. Onstage, a 19-piece big band of the Asosasyon ng Musikong Pilipino or AMP delivers a blast from the free-and-easy past via the Juan Silos Sr./Levi Celerio classic “No Money, No Honey” with Skarlet on vocals.

The AMP—led by musical director Mel Villena and composed of the country’s most sought-after session musicians like saxophonists Tots Tolentino and Michael Guevarra, bassist Simon Tan, trombonist Ronnie Marqueses and trumpeter Nestor Gonzaga—seems to have found a new home here, after being “displaced” when its regular “pwesto,” Skarlet’s Kitchen, closed down.

Tierry Garcia, who runs [email protected], was a former US resident who mounted jazz concerts featuring The Rippingtons, Spyro Gyra, David Benoit, among others, in the States. He once had a franchise of Crave Burger until he opted to put up his own burger joint, Champs, along the popular food row on Maginhawa Street.

He also serves Champs burgers in [email protected], which has a full-house crowd. We spot a group of ardent music lovers—Celine Cristobal, Gou de Jesus, Ramon Anson and Ricky Avanceña—enjoying the show.

Villena surprises us by taking the mic to sing a Sinatra medley, after which he goes back to his conductor duties as the AMP band plays “In the Mood” and other retro dance tunes.

Soon, the music veers on a funky, R&B direction with hits by Wild Cherry, Blood, Sweat & Tears, Chicago, the Commodores, even the Beatles (“Got to Get You into My Life”), as the audience gets loose and merrily sings along.

The beer is ice-cold tasty and costs P75—cheap enough for our friend, cosmetic surgeon Tito Garcia, to keep ordering one bottle after the other.