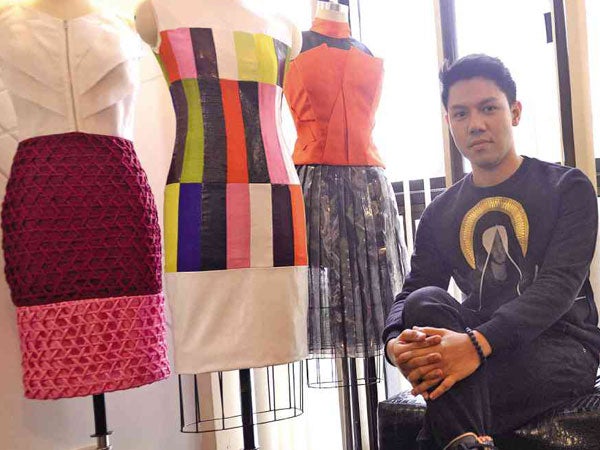 Chanel, Dior, Balenciaga are on his tribute wall

One of the focal points in young designer Roland Alzate’s shop in Makati City is a so-called “tribute wall” composed of framed photographs ofhis idols in the fashion biz.

Except for Hubert de Givenchy, Nicolas Ghesquiere and Noel Crisostomo, the personalities on his “gallery of greats”—from Cristobal Balenciaga to Yves Saint Laurent, Coco Chanel to Madeleine Vionett—have passed away.

Completing his roster of inspirations are Halston, Christian Dior and Pierre Balmain. Their pictures are alongside Alzate’s three winning pieces in last year’s Look of Style Awards.

As part of his prize, Alzate received a one-week scholarship from the British Council, at the prestigious Central Saint Martins in London.

He flies to the UK any day now. Upon his return, he’ll work on a debut collection for Bench. He has just signed up as the Filipino global brand’s women’s wear designer.

“There are many great designers,” said Alzate, who started designing professionally a little over a year ago. “But these designers are the ones who inspired my work. I admire Balenciaga, for instance, for his tailoring and ability to come up with something new and revolutionary that no one else did. I like Chanel for her sophistication and common sense. She showed women that beauty and fashion could be achieved by combining the simplest things.”

Before we could even tease him about Crisostomo, his companion of several years, Alzate credited him for being his mentor. He cited Crisostomo for his ability to do clothes that look “chic, trendy and expensive” without resorting to over-embellishment.

“I really enjoy dressing up,” says Alzate, a Marketing and Accountancy graduate from St. Louis University. “Before, whenever we traveled abroad, I really checked out the clothes, both men’s and women’s collections.”

Since his shop on Aranga Street (tel. 0917-8744600, [632] 5538560) is a one-room affair, he thought of ways to create an illusion of space. The unit’s previous occupant had the walls in black. Not only did it make the space look smaller, it appeared dark and uninviting even during the day.

“I opted for cream, and had the entire unit repainted to make it conducive for work and receiving clients,” he said. “Apart from the fresh coat of paint and new set of lights, everything remained as is.”

He and Crisostomo have an atelier or production area in another part of Makati, along Sampaloc Street, also in San Antonio Village, that doubles as the latter’s shop.

Alzate drew inspiration from Crisostomo’s first shop on Vito Cruz Street. It was in neutral colors, with clean lines. But while Crisostomo’s old shop looked a bit cold and industrial with touches of silver gray, Alzate’s shop appears homier and more laid-back. He attributes this to his decision to keep the dark, low-maintenance tiles that came with the unit.

Alzate’s furniture is limited to a few “retro-modern” pieces in neutral shades, such as camel and black, faux-crocodile stamp leather. His desk is also free of clutter, save for a sketch pad and a few drawing instruments. Behind him is an iMac desktop where he does his research.

“Sketching comes naturally to me,” he says. “I used to join drawing contests as a child. I was enrolled in Fine Arts at UP Baguio. I had to shift to Marketing because my father wanted me to pursue something more practical.

“When I feel I’m getting lazy and complacent, I try to force myself to think out of the box,” he says.