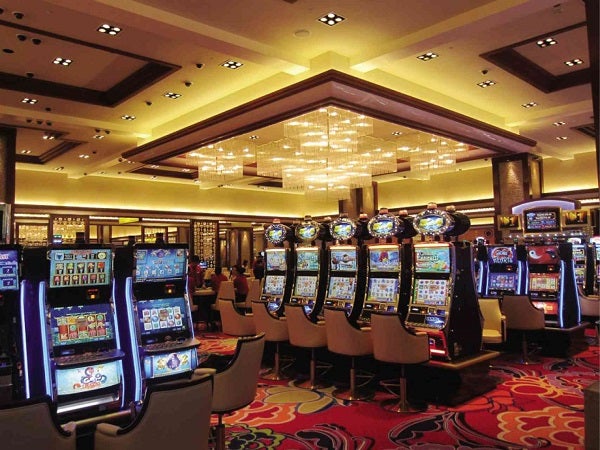 THERE are 1,200 slot machines at the gaming areas of Solaire.

Solaire: A taste of Vegas fun and Macau’s serious business

Apparently no expense was spared to build this luxury.

Chandeliers made of hundreds of curving glass pieces are strung together in a spiral-like design.

There are polished, light-colored marble slabs in most of the public spaces on the first and second levels.

The second floor, for serious high rollers, has private rooms with lush, tufted couches  and seats on brass casters costing $700 each.

Amid the glitz, there are no mirrors except those installed in toilets and those on the second floor hovering above.

In an exclusive interview, architect Paul Steelman told Inquirer Lifestyle that mirrors were a no-no in casinos because people don’t want to catch a reflection of themselves while they’re on a slump or a winning streak.

“We want every single person who comes here to feel great. It doesn’t matter whether you have $10 or $10,000. We want you to feel uplifted that you ‘can beat this place.’ If you see yourself in a mirror, you will see the flaws, the pimples, the tired-looking eyes. All of a sudden, you don’t feel empowered,” Steelman said.

This is just one of over a hundred rules he and his team have come up with, and taken note of, in his long career of designing some of the world’s splashy casinos.

Unlike other buildings, he said, casinos are different because there are over a dozen major departments to think about, including the gaming areas, full-service restaurants, retail spaces and guest rooms.

“It’s like a living embryo. It has to pulsate to the exact heartbeat to make everybody feel as if it’s a personalized service. Designing a casino is an absolute science,” Steelman said.

Still, the owners made it a point to hold focus group discussions with regular casino goers before construction could begin to find out what they wanted from or expected of Solaire.

“They wanted Las Vegas,” Chief Operating Officer Michael D. French said. “Filipino players want the free drinks, the pretty female greeters, the glitz and the glamour. They repeatedly told us: ‘We want to be treated like we’re important.’ That is what one can expect at the gaming areas on the first floor.

French said that Filipino players are very social beings. They like to talk and drink and head over to a nice restaurant afterwards to spend some of their winnings. In Macau, the players are very focused on the game, the atmosphere is very business-like.

“That’s why we decided to separate the two very different ways of playing: the first floor has a Vegas-like vibe, while the second floor is for Macau-type players who can spend hours at the table,” French said.

Fortunately, there’s more to Solaire than the gaming floors; it has dining outlets that look really promising. During a press preview held days before the hotel’s opening, we checked out some of the signature restaurants: Finestra (Italian), Red Lantern (Cantonese), Yakumi (Japanese), Lucky Noodles (Asian selection), Fresh (international buffet), and Strip Steakhouse where we feasted on Steak tartare and US strip loin cooked medium.

Seafood is flown in from Tokyo’s Tsukiji market for Yakumi; other ingredients are also imported.

Steelman’s vision for Solaire is very distinct. Artistic renderings were brought to life with minimal changes. For example, the palette at Red Lantern may have been limited to the red carpeting and the yellow chairs, but the way these primary colors were used was fresh and modern.

Oversized black calligraphy splashed on the walls and glass panels imparted the look of graffiti, but in an oddly tasteful way.

The property’s food court was the only space still unfinished during our visit, but the candy-colored orbs hanging from the ceiling are sure to be one of the most “Instagrammed” images of the casino.

Steelman likened Solaire to the Mirage Wynn Hotel in Las Vegas that tried and succeeded in changing the concept of tourism by mixing dining and entertainment with gaming tables.

To prepare for the influx of tourists, Solaire has hired over 4,500 Filipinos including 400 professionals already working in casinos in Macau and

“We held job fairs and job caravans throughout the country. We talked to 50,000 people, eventually narrowing it down to the 4,000-plus we hired,” French said.

At the moment, there are only two retail stores at Solaire: Lucerne and a still unnamed jewelry store. But once the second phase of development is completed in roughly 18 months, there will be new things to see.

Aside from 300 additional guest rooms which will bump up the existing total to 800, planned highlights include cinemas, a theater and a slew of high-end stores.

Asked if Chanel would finally open a boutique in the country to sell more than just perfume and makeup, Solaire director of marketing and communications Joy Wassmer said that several officials from the French luxury brand had already made a site visit, but wanted to verify first who their next-door neighbor stores would be.

There is still much to look forward to at Solaire, since only half of its 16.3 hectares have been developed. “For casinos to be successful, they have to be part of the current entertainment trends which might include a full-sized theater,” Steelman said. “One thing for sure, it will always be about aspirational design. It won’t be gaudy or over the top.”

Steelman then likened Solaire to the iPhone. “The phone couldn’t be simpler in design, but then again it looks good on everybody. That’s what Solaire is all about.”