Some dance to remember–and to forget | Inquirer Lifestyle ❮ ❯ 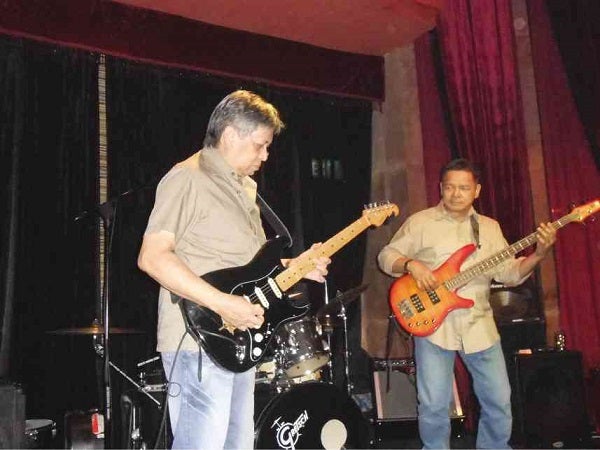 Some dance to remember–and to forget

Laid-back is a deceiving term to describe the Wednesday night scene at Martinis Bar of the Mandarin Oriental Hotel in Makati City. Although the regular crowd of Caucasian expats appears to be relaxed, engaging in small talk while sipping their drinks, soon they will lose their inhibitions at the sound of rousing music from a band that calls itself the Manila Blues Experience.

Each of them has his own separate band—Vic, formerly of Bamboo, is now with Hijo; Norman is a veteran session musician; Wowee plays with jazz groups aside from running his own club, 19 East in Sucat, Parañaque City; and Kat, of course, is the lead singer of Sinosikat. But their love of the blues, primarily instigated by Wally, goads them to keep performing at Martinis for the past seven years, says Wowee.

The mood turns electric-hot with the first number, B.B. King’s “Rock Me Baby”—Norman and Vic’s driving rhythms accentuated by Wally’s fiery solos. Kat looks sultry, seducing the audience with her provocative dance moves, although her singing is quite weak.

But she gets her bearings on the next song, Tracy Chapman’s “Give Me One Reason.” We nod our head and smile upon hearing the band’s version of Steve Miller’s “Fly Like an Eagle.”

The music intensifies with the Dusty Springfield hit “Son of a Preacher Man” and Stevie Ray Vaughan’s “Pride and Joy,” until the crowd starts dancing to the R&B classic “Mustang Sally.” The merrymakers move in funny steps; they’re actually out-of-sync with the song’s tempo, but we join the fun by clapping our hands and shouting our approval.

After Wally winds up his signature lead lines on one of his favorite tracks, Eric Clapton’s “Crossroads,” somebody from the hotel, apparently one of the managers, goes onstage and takes the lead vocals on The Eagles’ “Hotel California.”

We are dumbfounded at the way he sings, ugh, screams out the lyrics in hardcore punk-style. It’s a surreal sight: a guy in corporate attire mangling a folk-rock tune in a rambunctious manner. Wally winks at us, chuckling while trying to keep up with the ruckus.

The jam session turns a bit confusing when the singer loses track of the lyrics: “Some dance to remember, some dance to forget…” He actually forgets the lines and everyone howls with laughter.

Thankfully, he leaves the stage after the song, the band moves on like nothing happened, and the crowd keeps on dancing like the party won’t stop till dawn.

The beer costs P200; we consume around four, but the waitress says the bill has been taken care of by a friend at the bar, who waves at us to join him.

On the Ayala Avenue side of Makati City, at the InterContinental Hotel, a club called Gambrinus (a short walk behind the lobby) features an acoustic pop act, singer Suy Galvez backed by guitarist Edil Luyon.

It is a Tuesday night and the mood is chill. Suy—a native of Davao who has been singing in Manila with bands and as a solo performer for the past several years—renders a note-for-note version of the Nat King Cole hit “That’s All,” but in the Tagalog (salinawit) lyrics by Pete Lacaba. Her voice is sweet, yet her phrasing swings with an adventurous, atonal edge.

The succeeding songs jump back and forth to different eras: the Alessi Brothers’ “Oh Lori” from the 1970s; George Gershwin’s “Summertime” from the ’30s; Sting’s “Englishman in New York” from the ’80s; Adele’s “Chasing Pavements” from 2008. We hardly notice the disparity of the periods when these tunes first came out, because what matters is how Suy is able to bridge them like threads from both distant and recent memories.

Time and again the relaxing ambiance is rudely broken by loud voices from the bar staff, specifically a couple of waiters who seem to be busy attending to an ongoing function in an adjoining room.

Suy is in the middle of singing an original composition, “All That I Need,” when the waiters bark at each other like fishwives at the Navotas port. The distraction is unsettling—even Suy feels like losing her concentration, but she finishes her song with aplomb.

She ends the last of her three sets with sprightly renditions of Lady Gaga’s “Poker Face,” Jessie J’s “Price Tag” and Maroon 5’s “Moves Like Jagger,” all of which demonstrate her ability to sing just about anything—even when she keeps glancing consciously at her iPad between each number.

The only concession to the waiters’ indiscreet behavior is that they serve ice-cold beer (also priced at P200 each) quite well, pouring it neatly in a tall glass.