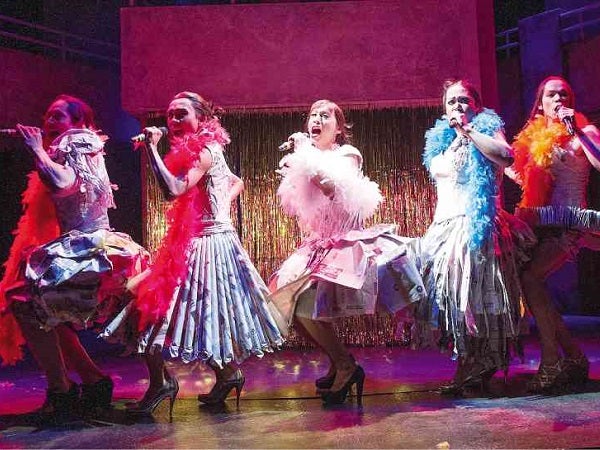 The documentary, which had its Philippine premiere in 2006, “follows the lives of … migrant workers from the Philippines who work as health care providers for elderly Orthodox Jewish men [in Tel Aviv] and perform as drag queens during their spare time.”

The play “Paper Dolls” held its world premiere at The Tricycle Theatre, London. Philippine Educational Theater Association (Peta) staged its own musical “Care Divas” in 2011, also inspired by the documentary.

Domingo was in the cast of Ma-Yi Theater’s “The Romance of Magno Rubio” when it played at the Cultural Center of the Philippines in the early 2000s.

Paragoso plays Zhan in “Paper Dolls.” “He’s the comic relief character. He’s very dramatic, naughty. He’s the scene-stealer. I sometimes just say I play the short, fat, funny one in the show,” Paragoso says via e-mail. His agent had put him in for the show and he did three callbacks before landing the role. “Quite nerve-wracking!”

Paragoso was born in Manila and made his stage debut in Rep’s “The King and I.” Aside from acting for Rep, he was also a dancer for Philippine Ballet Theater and Powerdance.

In 2001, he moved to London and has performed for UK national tours of “Miss Saigon” and in such shows as “The Reporter” (National Theatre), “Peter Pan” (Manchester Opera House) and “Aladdin” (Theatre Royal Stratford East).

Since Paragoso actually grew up in Manila, he became a cultural consultant of sorts for the production. “I had to ask my [Filipino] friends for help, especially with the gay expressions which I am not that up-to-date with,” he says.

“The text is very well-written. Philip is amazing!” he says about working with an original script. “He was able to capture how Filipinos would speak English, how we Filipinos sometimes translate Tagalog into English in our minds and then speak.

“During the rehearsal period, a lot of changes were made [to the original draft] to convey the story better. We tried out a lot of things and it was extremely helpful for all of us as we learned so much about the characters in the play.

“The Filipino culture and Jewish culture are so well-represented in this play. It’s such a complex story … it’s quite a challenge to do this knowing it’s based on real people.”

Several of the documentary subjects who are now based in London were able to watch the show and meet the cast.  “It was weird to meet the person I’m playing. They were very lovely people. They said it brought back memories about their lives then.”

(Salvador “Sally” Camatoy, one of the caregivers featured in the documentary, was found dead in the United Arab Emirates in 2007).

For Paragoso, doing the show has been “a lot of fun! [It’s] a lot of hard work but I’m very privileged to be working with some of the best people in the industry. We all get on very well. I don’t feel like I’m working!”

He adds: “Indhu and Philip are absolutely wonderful to work with. As an actor, to be given so much freedom by the director and playwright to portray a role is a dream. They nurtured us in a way I’ve never experienced before, and I’m very grateful.”