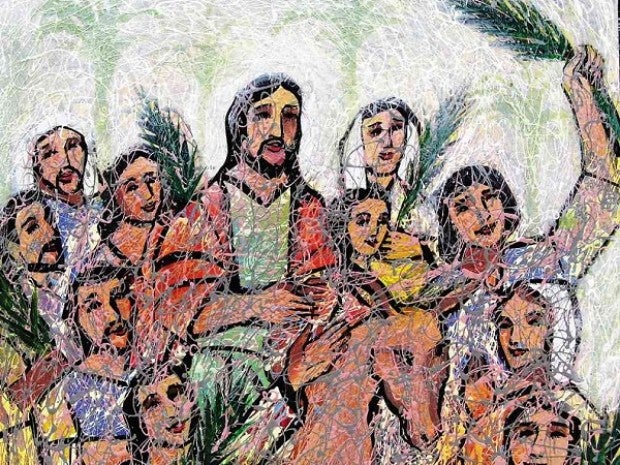 MOMENTS WITH CHRIST This painting of Jesus Christ’s triumphant entry into Jerusalem on Palm Sunday is part of Manuel Baldemor’s exhibit at the Atrium of SM Megamall in Mandaluyong City, which runs till March 31. It employs a technique that consists of letting the paint drop from the brush as the artist guides it. “In similar fashion, I can give homage and meditate on the drops of blood Christ shed for our sins,” Baldemor says.

Like the adulation of the crowds during the triumphal entry of Jesus Christ into Jerusalem, the euphoria over the election of Pope Francis might not last once he poses the “unsettling questions” raised against the Church on sexual morality and other “difficult” issues confronting modern society, a Church historian said yesterday.

Reflecting on the commemoration of Palm Sunday, Fr. Emil Quilatan, OAR, said the Catholic faithful would have to delve deeper into how they would respond to the Pope’s traditional teachings against artificial contraception, divorce, same-sex unions and other “unpopular” Church teachings after the adulation over his election fades away.

“The euphoria over the election of the new Pope will not last as we focus on the problems facing us today because we are always called to go back to our fidelity to God. We are called to be faithful,” Quilatan said in an interview.

“The Pope will be making statements that will be uncomfortable to us. How will we accept these teachings? He will pose unsettling questions and we should reflect on how we would respond,” he added.

Pope Francis has won worldwide praise for his simplicity and humility after he was elected the 266th successor of St. Peter and Supreme Pontiff of the Roman Catholic Church and its 1.2 billion followers.

Many admire him for breaking Vatican protocols and downplaying the trappings of power that have accumulated around the papacy in its evolution into an absolute monarchy over the centuries.

But Quilatan pointed out that Jesus also won praises when he made a triumphal entry into Jerusalem—which the Church commemorates today, Palm Sunday—but this would later lead into his crucifixion.

“They were singing praises during His entry into Jerusalem. But what happened after that? They crucified Him,” he said.

Quilatan noted that while Francis was known for his simple lifestyle when he was still archbishop of Buenos Aires—he ditched his chauffeured car to travel by bus or train to work and moved from the archbishop’s palace to a simple apartment where he cooked his own food—the Pope has held on to the Church’s more traditional teachings.

“He has maintained the Church’s teachings against artificial contraception, divorce and same sex marriage because these are not in accordance with the word of God,” Quilatan said.

He admitted that these teachings would not go down well as society becomes more secularized but added that the Church has a “prophetic role” to remind its flock.

“The truth hurts. It is unsettling, and it will make us uncomfortable but the Church has a prophetic role and should speak about these matters,” he added.

Quilatan also said Catholics should not just leave it up to the Pope to implement reforms in the Church.

“We are also called to be protagonists in our Church and not act as if we are mere bystanders since we are all called to help create the kingdom of God here on earth,” he said.

Quilatan said the faithful could participate through individual conversion to holiness or actually living the teachings of the Gospels.

“Is Jesus just the Lord of my pocket? Some of  us pray only when we receive the goods that we need,” he added.

Quilatan said Pope Francis should not be described as a “progressive” but someone who exemplifies “dynamic orthodoxy.”

“He is not a progressive. What he is showing us is dynamic orthodoxy. He not only preaches the word of God but also actually applies it in his own life,” Quilatan said.

He also downplayed fears of traditionalists in the Church that Francis might do away with Pope Benedict XVI’s focus on restoring the “sense of the sacred” in how the Mass is celebrated.

“The liturgy is always in reform. Pope Francis is balancing worship with mystery. A religion without mystery is not a religion at all,” Quilatan said.