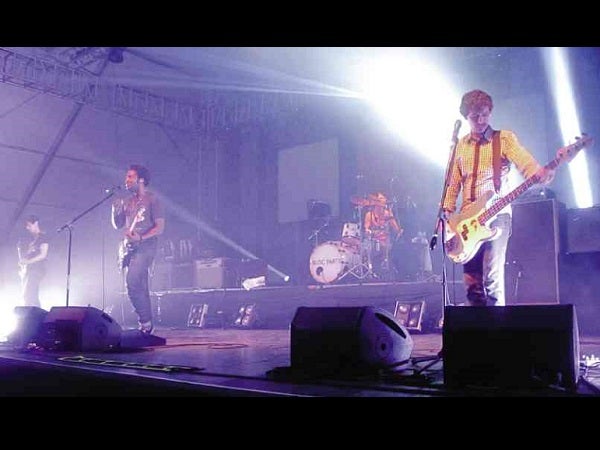 “INTENSE” would be an understatement to the 20-song exhibition of the post-punk quartet from London. PHOTO BY DENISON REY DALUPANG

For the most part, it all felt like a dream.

To many Filipino fans, Bloc Party playing right in front of their eyes was just an idea buried within the deep recesses of their mind. More so, the band sharing the stage with their Filipino “counterpart,” Up Dharma Down (UDD).

But the night of March 22 was all sorts mystical as the sonic gods—somehow in a generous mood—turned every part of the dream into reality in Pasay City’s World Trade Center (WTC).

UDD, opening for the London-based band, whipped a brisk but engaging set, playing “Parks,” “Turn it Well” among other tracks from its latest album “Capacities.”

Singer-keyboardist Armi Millare was her usual sleek self, at times resembling the performing style of The Naked and Famous’ Alisa Xayalith. Carlos Tañada showcased his dexterity in playing the bass and electric percussions, while lead guitarist Paul Yap and drummer Ean Mayor were in their customary laid-back-but-immersed selves serenading the crowd.

Bloc Party kicked off with “So He Begins To Lie,” coincidentally the first song off its latest album “Four.”

The fans sang along with front man Kele Okereke, who’s known for his sultry falsettos and indefatigable and poetic singing style.

The intense pace lasted for a little more as the enormously nasty “Mercury,” the playful yet melodically picks “Hunting for Witches,” “Positive Tension,” and the Russell Lissack-showcasing “Team A” heard action.

The band then took a swerve with the ethereal “Waiting For 7.18” which seamlessly transitioned to the mathematical and pounding “Song For Clay (Disappear Here).”

Before exploding with the anthem “Banquet,” Kele hushed the crowd to sing some lines from his solo single “Tenderoni.”

As “Banquet” played, and with enthralling lights as a backdrop, WTC’s Hall D became a dance floor to thousands of limbs swaying and heads wobbling, juxtaposed against the English band’s uptempo beats.

After taking a short breather, the band went on with the angsty “Coliseum,” which featured Lissack and the shirtless drumming machine that was Matthew Tong rabidly playing with their instruments.

The air was filled with roars of approval as the band played “Day Four,” followed by the equally magnetic “The Prayer.”

Bassist Gordon Moakes swapped his bass for keyboards to start the buoyant “One More Chance.”

As if never running out of energy, the band upped the ante with “Octopus,” which again showcased Lissack with some good licks on his guitar.

The song seemed to be the last for the night as Okereke dropped his axe and the rest of the guys faded into the background while the lights dimmed.

But the band went back on stage for its encore. “So Here We Are” sparked a call-and-response singing with the crowd.

After performing the ravenous “Ares,” Bloc Party proceeded with the much-loved “This Modern Love.” Absorbed by its mantra-like guitar pickings accompanied by Okereke’s earnest vocals, many in the crowd stood still, their eyes shut.

Showing his appreciation of the fans’ warm treatment, Okereke said, “Manila, you’re gonna make me cry. Sorry, but this is our last song.”

The audience refused to let the band go.

Surprisingly the band obliged and did a couple of verses from Rihanna’s “We Found Love” before moving on to the easy-cruising “Flux.”

Before finally calling it a night, the band performed its final encore, the riveting “Sunday” followed by the pleading “Truth”—which prompted another sing-along with the crowd.

This was followed by another classic, “Helicopter,” the band members giving everything they’ve got.

When the show finally ended, Bloc Party proved it was as good live as it is on record. There might have been a few misses along the way, but what mattered most was the total experience.