Xavier chapel in Nuvali: A ‘bejeweled rock’ inspired by the story of the Jesuits | Inquirer Lifestyle ❮ ❯ 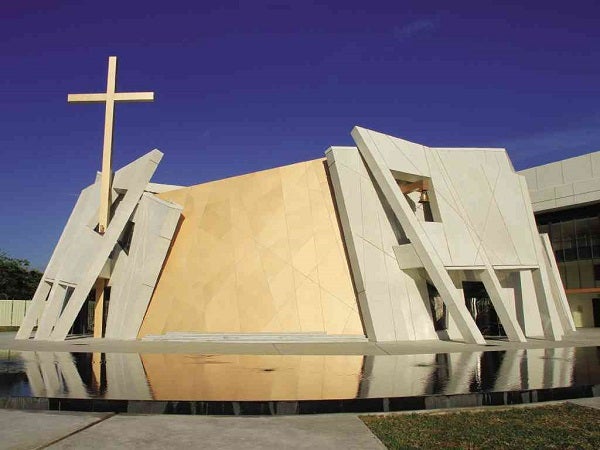 FINISHING TOUCH. A reflecting pool between the Oratory and the quadrangle. On a clear and calm day, the Oratory and sky are mirrored on the water. PHOTO BY NELSON MATAWARAN

Xavier chapel in Nuvali: A ‘bejeweled rock’ inspired by the story of the Jesuits

From the road, the Oratory of St. Francis Xavier stands like a jagged boulder amid the boxes of school buildings in the sprawling campus in Nuvali.

It is a first in the 57-year history of Xavier School to have a chapel with the Gokongwei family as principal donors. Architect José Pedro “Bong” Recio, who is also the principal architect of Xavier Nuvali, was tasked by the Jesuits to create a place of worship that would celebrate the ideals of the school as well as modern suburban life.

Recio was inspired by Ayers Rock, a sandstone landmark in Central Australia, which is hallowed ground to Australian aborigines. His vision was that of a chapel rising from the ground. Likewise, the Jesuits were inspired by that moment in the Gospels when Christ spoke to disciple Peter (whose name means “rock”)—“And I tell you that you are Peter, and on this rock I will build my church, and the gates of Hades will not overcome it.”

The most significant elements are the Crucifix on one side and the bell on the opposite. These are references to St. Francis Xavier, a Spanish Jesuit, who carried these sacred objects when he went to Asia to spread Christianity. The punctured walls from which these emblems emanate represent the saint’s hands.

The angled walls required a sturdy material, glass fiber reinforced concrete (GFRC), which is also used for artificial rockwork. Dominant color is neutral gray, which is calming to the eye, with a warm champagne-gold accent wall.

Although the chapel’s form sets itself apart from the other buildings, its color scheme still blends with that of the rest of the campus.

Although the architecture is expressive and nonconformist, it is designed with the function of a traditional chapel. It is a place for communal rituals and public religious services as it is a sanctuary for introspection. The cavernous space, which can accommodate 500, evokes a sense of wonder.

The walls are made of sapele, a reddish-brown hardwood, which are stained in dark mahogany. The warmth of wood embraces the chapel and makes one feel closer to the Divine.

The wood paneling has the pattern of the descending order of the pipes in a church organ. The vertical strips start wide and get narrower toward the top. Burnished to bring out the stone aggregates, the textured concrete flooring has a rustic feel.

From the main ceremonial door made of salvaged antique wood, the eye is  drawn to the altar. It is the only white concrete side that plays against the deep tones of the walls. The undulating ceiling gives the chapel character, with angled skylights creating ruptures of sunlight.

The most significant elements are the altar, lectern, tabernacle and stained windows, which tell the journey of St. Francis Xavier and the Jesuit missionaries. The artworks are the first religious project of designer Carlo Tanseco, a Xavier alumnus.

The three-dimensional, backlit stained-glass Crucifix shows a victorious, smiling Christ, who spreads joy and love to the world.

“Carlo Tanseco’s contemporary interpretation of the Santo Cristo de la Sonrisa is still found today in the family chapel in Javier Castle in Spain. As a child, Francis Xavier prayed with his family before the smiling image of Christ. The original Smiling Christ of Javier is an unusual 13th-century life-size crucifix showing Christ on his last breath but with a serene smile playing on his lips. Even as he hangs on the cross, Christ anticipates his resurrection and promises us our own,” explained Fr. Johnny Go, Xavier president, in one of his homilies.

“It is also the Cosmic Christ reigning over the wu xing—the five Chinese traditional elements of the universe: wood, water, metal, earth and fire… We’re calling it ‘Light of the World,’ inspired by our school motto ‘Luceat Lux’ (Let our light shine!).’”

Tanseco’s altar, lectern and tabernacle were made from single pieces of hewn marble from Mount Sangat of Norzagaray, Bulacan. The bronze sculptures represent the milestones in St. Francis Xavier’s journey. The altar is inscribed with “IHS (Iesus Hominum Salvator)”, the Latin insignia of Jesus, Savior of Men.

The lectern presents the bell which St. Francis Xavier used to call the children and the crab which rescued his crucifix when it was lost in the stormy sea.

St. Francis Xavier’s burning heart, which symbolizes his drive to share Christ’s teachings, is the centerpiece in the crucifix that wraps the tabernacle.

The trapezoidal windows are tipped in various angles, in keeping with the irregular form of the church. Tanseco designed 21 stained windows to narrate the story of the Jesuit mission from Europe to China and the Spiritual Exercises of St. Ignatius Loyola, St. Francis Xavier’s mentor.

“Thanks to the vision and work of the artist, this oratory has been turned into a bejeweled rock, studded with shards of colors and images. It is really for us a repository of stories that define us and tell us where we’ve been and where we’re headed as a community,” said Go.

The most symbolic window, he added, shows St. Ignatius Loyola, a pilgrim in Manresa, a city in Northern Spain. One panel shows him communing with God in a cave. Another depicts him kneeling before the Blessed Mother and Child while composing the Spiritual Exercises, a set of prayers and meditations to be accomplished in a month.

“On the top panel of the same window, we have Ignatius outside the cave, braving the elements,” said Go. It is inscribed with the Latin Contra ventum tibi ambulandum est (You need to walk against the wind).

“The line captures the spirit behind our stories, the spirit of the people in our history who were not content simply to go with the flow but who walked against the wind in order to bring Christ to others.”

Go shared how Francis Xavier dared to explore uncharted territories in India, the Moluccas Islands and Japan. Although he died before he could do his mission in China, two other Jesuits, Matteo Ricci and Adam Schall, went on to fulfill Xavier’s vision. They eschewed their traditional missionary robes for Mandarin apparel and adopted the customs and language of the Chinese.

Winning the confidence of the natives, the missionaries became founders of the Catholic missions in China in the 17th century.

In the mid-20th century, when a group of Jesuits were driven out of China, they moved to the Philippines.

“Instead of waiting around disheartened and simply going with the flow, they raised what limited resources they could and accepted the invitation from the local Chinese community to open a school for Chinese boys in an old converted warehouse in Echague,” said Go.

In all, the Oratory inspires awe with its bold form, yet the interior finishes bring comfort and ease to the modern churchgoer.