How Gregorian chants, owl hoots and other sounds can heal 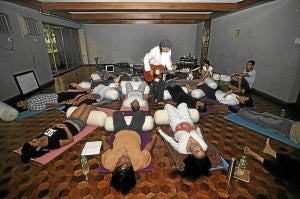 In the cool, dark room, an ethereal sound fills the air, a harmonic blend of harpsichord and dreamy chants. The music is punctuated by more music: a guitar strum, the sound of a flute, drumbeats.

But the room is no theater, and the musical showcase is not for the audience’s entertainment—it is a “sonic bath,” a sound healing treatment performed by soundscape artist Djotay Soluta to help people “tune” their bodies and rid their chakras of blockages.

Soluta recently facilitated the treatment for a small group at the Echoyoga Community Center in Makati.

The treatment is easy. Participants lie on their back, close their eyes, and listen to the music played by Soluta using his synthesizer and other instruments. Just like the usual massage, one is allowed to fall asleep while absorbing the sounds played for around 20 minutes. 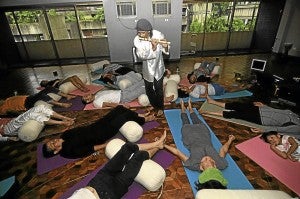 Soluta’s work is rooted in psychoacoustics, a study that deals with sound and its psychological and physiological effects on a person. He began exploring psychoacoustics in his Sound Resource Laboratory in the Visayas years ago, after immersing himself with indigenous tribal communities for 25 years and learning about “functional music.”

Soluta says he uses the “right scale of creation” with his pieces, utilizing different hertz levels to bring about different effects on one’s chakra system.

The scale Soluta indicates is not the usual 12-Tone Equal Temperament Scale (do-re-mi-fa-so-la-ti-do), but the Solfeggio Frequencies, an ancient tonal scale said to have been used in Gregorian chants. There are six tones, which correspond to six frequencies.

Soluta says the frequencies were “lost” for many centuries, but were rediscovered and are now used as effective healing tools. 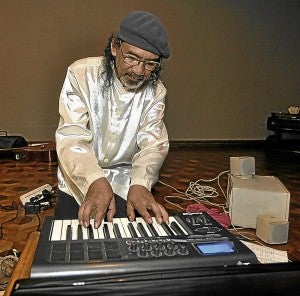 “Sacred Ground,” his first piece, is like a slow, deep and distant chant, mixed with what sounds like a long, high-pitched, melodious owl hoot.

But one can also hear flowing water, birds humming, a child’s laugh, the howl of a wolf, and a flute, melding together to form a nondescript sound played with a 528-Hz frequency. This piece, says Soluta, “targets one’s heart chakra.”

The second piece, “Alpha and Omega,” has a frequency of 417 Hz, which Soluta says is directed toward aligning one’s female and male chakras. Again, the music is like a mix of different chants in varying tones, accompanied with percussion, and what sounds like howling wind coming from different directions—or is it an eagle’s cry as it swoops down from the sky?

At the end of Soluta’s first piece, some participants reported a deep feeling of relaxation. The second piece left a good number with more of an adrenaline rush, while it was the other way around for some.

Some revealed relief in body pains; others still even had an out-of-body experience, like astral projection.

“The unique sound takes one into a sort of dreamscape,” says Soluta. “The synthesizer allows me to achieve the needed frequencies and create the sound healing experience.”