‘The Full Monty’–the bare bodies are just the icing on the cake | Lifestyle.INQ ❮ ❯ 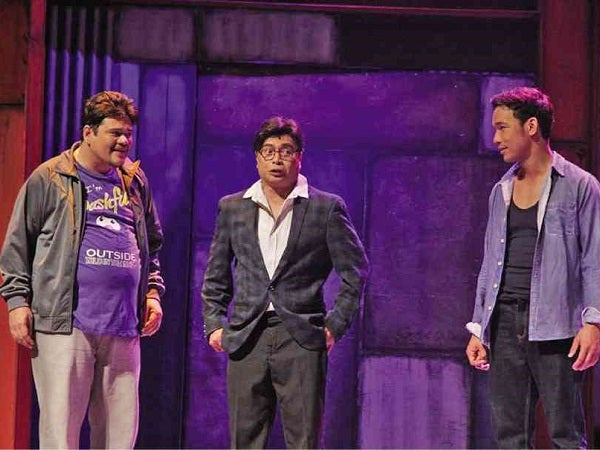 The strip show of six grown men is just the come-on and crowd-drawer of Viva Atlantis Theatricals’ “The Full Monty.” The centerpiece of this musical really lies in the gradual revelation of the male heart and soul, piece by poignant piece.

Long before the production reaches its skin-baring finale, the one-time-only male-stripper group founded by laid-off steelworker Jerry Lukowski (Mark Bautista) has already uncovered onstage the many layers that form the male psyche.

There may be exceptions, but generally, opening up their inner selves is not something your typical male likes doing. This holds especially true for the characters who are all blue-collar workers still firmly entrenched in a macho code.

The money may be running dry, but they chafe at the thought of getting any type of job that they feel is beneath them (e.g., mall baggers). They would try to hide the truth of their unemployment from their wives for fear of being dumped. Their worst nightmare: losing their wives and kids to another man who is a far better provider.

This kind of soul-searching is serious; ask any unemployed family man struggling to make a living. But “The Full Monty,” as directed by Chari Arespacochaga, makes it a hilarious ride. The 1997 movie on which it was based was a feel-good film. So is this musical, and the book written by Terence McNally and music and lyrics composed by David Yazbek have the audience cheering and clapping to the end.

What makes it amazing is that the catcalls and whistles are not cries of passion and lust, but a hearty salute of a once skeptical community toward men who have found a way to regain their masculinity. After unemployment cost them their dignity, now they’re back to recovering their balls, in more ways than one.

TV star Bautista, who gets the American accent down pat, makes a strong leader for this ensemble. He is a father and former husband who is desperate enough to put up a Chippendales-style show to raise the funds he needs to continue to share custody of his smart son Ethan (Nathan Baranda Paras).

His friendship with Dave Bukatinsky (Jamie Wilson, perfectly overweight for the part) is the fulcrum that holds the group together. Some of these characters were designed for comic relief, such as the simpering security guard Malcolm (OJ Mariano) and the “Spiderman” wannabe Ethan (Niño Alejandro).

Marco Sison as Horse does not totally project the African-American has-been (or never-was), but the singer in him still commands attention every time he belts a tune. Arnell Ignacio’s supposed foreman-turned-dance-teacher may have come in a little later in the story, but adds more layers to the plot. More than any of his dancing buddies, his fall from prosperity may be the hardest of them all.

The only female member of the band is the wisecracking piano player (Jay Valencia-Glorioso) whose acid wit keeps the group in check.

The bonding that forms among this motley crew soon spreads out to the rest of their circle, which is their families. Macho brawlers they may be, but they are still vulnerable to the women they love, and one of the most affecting numbers is the one sung by Harold and David to their sleeping wives (“You Rule My World”).

Another is the confrontation between Dave and his wife Georgie (Ciara Sotto). Malcolm and Ethan, meanwhile, both bachelors, find an unexpected comfort in each other (“You Walk With Me”).

Then there is, of course, Jerry and his effort to find a way to win back his son and the respect of his ex-wife (Sitti Navarro).

Struggles they may be, but from the time the first number is sung, the musical’s comic element is an assurance that all’s well that ends well. Maybe because of that

feel-good factor, there were some plot points that were tied just a bit too neatly or were simply unnecessary kinks that added nothing to the story.

Jerry’s sudden change of heart before curtain call had no emotional or thematic preparation. And for a wife who was righteously aghast over her son’s participation in a peep show, no matter how ludicrous, Pam suddenly appears during the big event, bringing her little boy and fiancé in tow.

All these are overlooked, though, once the proverbial show-within-a-show starts. Yes, this oddball bunch does take it all the way—and by then, amid all the hurrahs and hails, their bare bodies are just the icing on the cake.