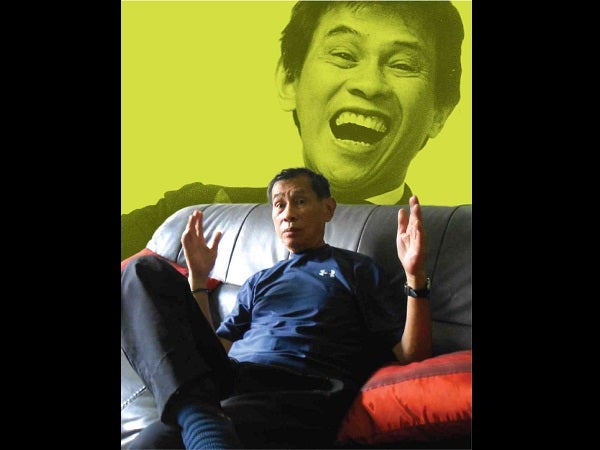 TWO FACES: Lising then and now. Photo by Pocholo Concepcion

For a moment, Gary Lising was speechless, quite a departure from his usual loquacious self.  He was recalling how astonished he was when Robin Padilla sent him P100,000 after the action star heard of his distressing condition, which was reported widely on TV recently.

“He surprised the hell out of me. I was very touched because I don’t really know him,” Lising said. “I remember guesting on his TV show once, but I’m not really close to him. His secretary called me up to say, ‘Robin is asking for your bank account number.’ I haven’t even thanked him personally… Robin has a heart of gold.”

Padilla is one of many people who have, over the past few years, extended financial help to Lising who has a host of cardiac problems. His heart nearly gave out on him when he suffered a cardiac arrest in 2009 and again last year which, he said, required him to undergo angioplasty more than once.

The medical procedure and the regular medication he needs have wiped out his savings, the comic actor said.  He had intended his savings for his only son, Bugsy, who was then studying to be an optometrist. (Bugsy, or Aaron Gary Lising, recently graduated from Centro Escolar University and is getting ready for the board exams.)

Before his first heart attack Lising said he was “doing very well.” He had TV shows, a movie and was busy with other work offers.  The heart problems were a mystery, he said, because he was healthy and had no previous ailments.

At age 72, Lising is definitely no spring chicken, but he has maintained his self-deprecating wit, that sharp, intelligent sense of humor which he parlayed into a successful career on television, the stage and the movies.

Lising said he never intended to be a comedian, although his buddies at the Ateneo de Manila had thought he was a natural jester.

“He was always trying to be funny,” recalled actor Noel Trinidad who, along with Subas Herrero and Lising, led the cast of the hit TV comedy show “Champoy” from 1981 to 1985.

Lising, who spent his childhood in Baguio, had not yet enrolled at the Ateneo, Trinidad recalled, when they became friends. “He would hang out with us on campus.  While walking and crossing a pond, he would just roll on the grass and made us laugh. That’s why we used to call him an alien.”

Said media executive Meckoy Quiogue, who first met Lising while he was vacationing in Baguio in 1958: “Gary’s purpose in life is to make people laugh. He loves to have fun and girls would enjoy his antics.”

When he formally entered the Ateneo as a college freshman in 1961, Lising made friends with Jun Urbano, who would later become known as “Mr. Shooli,” a spoof on a Mongolian character.

“He’s a born comedian,” Urbano said of Lising, who credits him as having given the now ailing comedian his first crack at performing in public.

At that time, Urbano—whose father was the legendary film actor, director and producer Manuel Conde—was himself starting to discover his own talents as a director. “We used to hold shows called the Campus Concerts,” he recounted. “Gary and I were the emcees.”

Lising recalled the scene well: “I was just watching on the sidelines when Jun pushed me onto the stage. He asked me to lip-synch to a song (Giuseppe Verdi’s “La donna e mobile” from the opera “Rigoletto”). The audience was dying of laughter. That started it.”

The Campus Concerts, which sold tickets and included a comedy show, had a regular run that gave Lising his first income as a performer and gag writer. “We were making so much money pati yung tuition ko nabayaran ko na (it covered even my tuition).  My father was so happy,” Lising recounted.

His comedic skills were put to even better use when he found himself in New York in the late ’60s.  “After college, I worked as a book salesman in Manila with Grolier’s,” he recalled.  “I sold so many books that the president of Grolier’s thought I was a super salesman. He didn’t know na lahat ng binentahan ko, puro kaklase ko sa Ateneo (that my customers were my classmates at the Ateneo). As a reward, they sent me to New York for training. After a few months, I resigned.”

Lising found his true calling through an ad in The New York Times that called for a gag writer for a TV show. He passed the audition with the now oft-quoted joke that he said he had made up to impress American sensibilities.  The joke was about how God’s son got his name when the three kings found him in the manger. When the third king was about to offer his gift, he tripped accidentally and blurted, “Oh, Jesus Christ!” To which Mary said, “Hey Joseph that sounds better than Irving.”

The TV gig was “The Tonight Show with Johnny Carson,” where Lising worked as a member of the writing pool for seven years.

In New York, he met the love of his life, Laura Lopez, daughter of then ambassador to the United States and the United Nations Salvador P. Lopez.  It was when he realized that even in awkward situations, he could always rely on his sense of humor.

When Lising formally asked for Laura’s hand in marriage, he recalled SP Lopez telling him: “You know, Gary, I have raised my children well. They have not known what it is to be hungry. They studied in Paris, they speak French, German. Now you want to marry Laura. Do you think you can give her the kind of life that I have been giving her?”

Lising: “I plan to move in with you.”

At that point, Gary said, SP Lopez—who looked very formal as a diplomat—stifled a laugh.

Lising and Laura Lopez eventually got married in France but the union didn’t last.  According to Lising, she was frustrated that she couldn’t bear the child he was longing for.  She decided to end the relationship. He agreed to the divorce.

Lising moved on and lived in the US for 17 years, doing odd jobs and entertaining Filipino communities as a stand-up comedian. He got his wish to sire a child when he returned to the Philippines and married Maris Paredes, one of the singers in the band Music Making Company, of which he was the manager.

Maris gave birth to Bugsy, but her marriage to Lising didn’t last either. It was Maris who had provided for Bugsy’s education, Lising said, while his son stayed with him in his townhouse at Casa Verde, Pasig. The house, given to Lising as a wedding gift by one of his wedding sponsors, Bert Lina, has been bequeathed to Bugsy as part of a deal that stipulated that his son would own it when he turned 21.

“So now I’m technically homeless, nakikitira lang (just living in my son’s home),” Lising said, smiling. He has also given up his car for his son’s use. He hopes to live long enough to see Bugsy get married and have his own child, he added.

For now, Gary said he wants to take on more jobs so he could support himself instead of relying on the generosity of his friends, mostly his Ateneo schoolmates who have been pitching in to help defray the cost of his medical bills. “I still owe P1.2 million in doctors’ fees, and it’s so stressful when their secretaries call me to follow up on the payment,” he said.

Though not exactly a pauper, Lising said he truly appreciates the assistance coming his way, including that from the TV show “Wish Ko Lang,” which gave him a tribute and a modest talent fee. His appearance on other programs like “Pepito Manaloto” and other series has helped tide him over.

“All the exposure will help,” said his Ateneo pal, Trinidad. “People think he’s not active anymore. He’s sort of forgotten by the industry… out of sight, out of mind. But he’s a great emcee. All he needs is more exposure.”

Quiogue expressed sadness that Lising’s cerebral humor might not be appreciated by today’s TV audience. “But for as long as he needs help, we’ll be here for him.”

Agreed Urbano: “Gary’s humor is different, mataas nang konti (it can be too intellectual). I’ve also been accused of that, when I play my character Mr. Shooli. Wala kaming magagawa, matalino kami e. Pero hindi naman madedehado si Gary (What can we do, we’re smart people. But I’m sure Gary won’t be on the losing end). I’m casting him in a new movie that I’m directing, a remake of ‘Ibong Adarna.’”

Singer and businessman Jose Mari Chan, one of Lising’s friends who has also been helping him, said: “Everyone who knows Gary can’t help but like him. But what he needs is to be loved for what he is.”

And for his jokes, which Trinidad said, still make him laugh though he has heard them lots of times before. Those jokes have been documented in the 17 books that Lising has written.

All of them are bestsellers, the writer-comedian said, and their royalties, no matter how small, come in periodically.

Lising insisted that his jokes are original and that he makes them up as the situation arises.  “Like when I went to the hospital. There was a baby just born. Lahat ng parts ng katawan niya may numbers… 7, 8, 1, 3, 6, 5 (All his body parts had numbers). Ano’ng nangyari sa batang yan? Sabi ng doktor, anak ng jueteng (I asked, what’s with that baby? And the doctor said, his father is a numbers game collector)!”

Asked about rumors on his being hooked on gambling and being impoverished by it,  Lising turned incredulous and shook his head: “I just bet P10 to P20 in ‘Texas hold ’em  (a community poker game)’ at Metrowalk (Pasig). It’s not big money, saan naman ako kukuha ng pera?  I do it for fun, it’s therapy for me. Ask (Inquirer columnist) Mon Tulfo, he knows me.”

Trinidad likewise attested that, while Lising went to casinos in the past, that’s not the reason he’s not doing well now.

His biggest problem at the moment, Lising stressed, is that he lives alone and can’t rely on someone to look after his daily needs. “I had a maid for five years,” he recalled. “She would yell at me,‘Maghintay ka muna!’ Magaling lang maglaba at maglinis. Pero magluto, hindi. Minsan nagluluto siya ng itlog sabi ko, ‘Huwag mong basagin yung pula, sunny side up.’ Hindi nga nabasag, buong-buo, ang niluto, hard-boiled egg.  (She does well laundering my clothes but can’t cook. Once, I told her to cook the egg sunny side up, don’t break the yolk.  Well, she didn’t.  The yolk was whole, the egg remained whole. She cooked it hard-boiled).” •