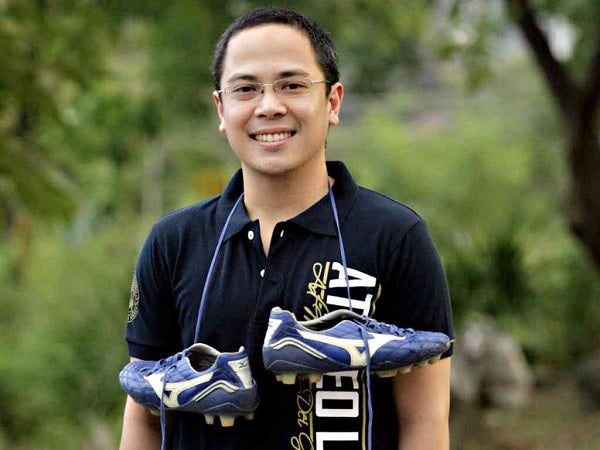 He was driving on the streets of Makati when he got the big news.

At first, it didn’t sink in. So when Ignatius Michael “Mickey” Ingles got the first of incessant media calls, he didn’t sound as ecstatic as a bar topnotcher should be.

“That interview was funny because I was stoic about it,” Ingles recalls with a laugh. “I was asked how I felt about topping the bar and I just said, ’I guess I’m happy.’ It was on air and some of my friends were like, ‘Bakit ang sungit mo? Di ba dapat masaya ka (Why were you so crabby? Shouldn’t you be happy)?’ But I was driving and there was a MAPSA (Makati Police Safety Assistance) guy beside me.”

Although Makati Police may be notoriously strict-and yes, that includes flagging down drivers using mobile phones on the road – it’s not the only thing that got Ingles a bit distracted.

“Mickey has a strong sense of right and wrong. If it’s wrong, he doesn’t bend it,” says Yanee Canto, a friend of Ingles from the Ateneo Law School. “One time I was with him when he was driving and his phone started ringing. He stopped the car and pulled over to take the call.  That’s how he is.”

When news broke that Ingles topped the Philippine Bar Examination—arguably the toughest professional licensure test in the country—last March, what got the media excited was the fact that Ingles is also a champion football player.

“I guess there’s an impression that lawyers aren’t well-rounded people and that they’re boring,” he says.

Ingles, who graduated salutatorian in his batch, got a score of 85.64 in one of the toughest bar exams in local history, with a 17.76 percent passing rate, the lowest in 13 years.

He also impressed people with how he had successfully juggled his studies and his sport, leading Ateneo to three straight men’s football championships in the University Athletic Association of the Philippines (UAAP) during his college years.

“My life has been a constant struggle to balance things. But I take pride in that struggle because I like being a balanced person,” says Ingles, the team captain of the Blue Booters’ “three-peat” from 2004, which still stands as a league record for the most number of consecutive football titles.

“I like having two identities,” says Ingles, adding that people often peg you as either a jock or a nerd. “So you surprise people when you’re both. I really like that.”

Football used to be top in his priority list, Ingles admits.

“Back in high school, he was more of a jock. He was more into sports than (academics),” says Raoul Angelo “Anj” Atadero, the 2011 bar topnotcher who was also Ingles’ high school classmate at the Ateneo.

“But he was also in the honors class. That already spoke volumes of his intellectual capabilities,” Atadero adds.

“Mickey and Ari would always say that we’re pretty lucky that people smarter than us in class didn’t end up in law school,” says Atadero. “Being around people who are talented just brings out the best in you. In that environment, you have to step up, be on your toes, be on top of your game. You don’t want to be left behind. When you see other people being excellent, you want to be one as well.”

For Ingles, though, the pursuit of excellence hardly means being on top all the time.

“I’ve had some setbacks in law school,” he says. “I remember getting a really low grade in security transactions… But I realized that I shouldn’t think of ranking, that I was there to learn about the subject matter. It’s good to get good grades, but it’s not an end-all be-all.”

In fact, Ingles didn’t get Latin honors when he graduated in 2006 with a degree in BS Management majoring in Communications Technology Management.

“At that time, I couldn’t balance football with Management Engineering. So I shifted courses, and after that, I was consistently on the Dean’s List. But I didn’t do well on the one law subject I had. I got a C+.”

Still, Ingles has always known he’ll end up being a lawyer.

“It was my default profession,” he admits. “My dad’s a lawyer and I saw how being a lawyer helped him and helped provide for the family. And I like it that you know a lot of things, that your knowledge can help a lot of people.”

Canto recalls how Ingles generously shared what he knew during their review sessions for the bar exam.

“Mickey made reviewers that he shared with everyone. He was never madamot (selfish),” she says. “He made copies of the reviewer which had a note at the end that read: If this reviewer helped you, share and pay it forward.”

Even strangers—foreigners, at that—have been at the receiving end of Ingles’ propensity to help.

In KalyeSpeak.com, Ingles and four other friends teach Filipino “as it is spoken in the street” to foreigners for free.

Their group uses the podcast-an audio, video or digital file produced in episodes and streamed online-to help foreigners learn phrases ranging from the basic “Kumusta (How are you)” to the amusing Pinoy parlance “Bahala na si Batman (Let the chips fall where they may).”

“It’s just for fun. Most of the Filipino learning materials online are boring, so we decided to do something fun,” says Ingles. “Our main target are Fil-Ams (Filipino-Americans) who grew up in the States. A certain percentage of our listeners are also Americans who have Filipino girlfriends.”

The idea came after Ingles spent a year in China where he studied Mandarin and also played for club Azurri in the Shanghai International Football League.

“When I got back here, I wanted to keep my ear for Mandarin,” says Ingles. “A friend took up Mandarin as well and he found this website that teaches Mandarin through podcast, so we followed their format.”

Then there’s One Tama, a movement that Ingles formed with friends that encourages Filipinos to do “simple and doable things” to make the country better, like unplugging unused appliances to save energy or saying thank you more often.

But Ingles is far from being a softie on the pitch where he plays the right wing. At 5’3”, he made the most out of his solid fundamentals and had been described by former teammates like Andoni Santos and football journalists as “intense,” “small but quick” and as “the team’s heart and soul.”

“In football, I’m very aggressive because I’m really competitive,” says Ingles, who also played for the Loyola team in the United Football League. “I guess I hurt people sometimes, but that’s part of it. The only way to win is to be aggressive. You have to go for it, attack every ball, win every tackle. That’s my mindset in football.”

It’s an attitude that he carried even when he started hitting the books in the library.

“But not in a sense that I want to beat other people,” he clarifies. “It’s an aggression not against other people but towards the subject matter.”

Fortunately, putting his sport in the backseat—which Ingles described as a “big trade off”—paid off more than expected.

The bar topnotcher has made his employer, the Salvador & Perez law firm, proud.  Even prouder was his family: wife Karla Michele, father Eric, mom Marites and older brother David, who’s carving his own niche as a finance reporter for Bloomberg Television in Hong Kong.

But legal practice isn’t the only thing on his to-do list.

“I’ve been trying to write this young adult novel since I was in law school,” says Ingles. “After I took the bar, I had time to gain headway. It’s like a coming-of-age novel. I’m three-fourths done with it and it’s now about a hundred pages. Hopefully I can finish it.”

Just several more chapters, he says. But that’s just for his fictional story of course, for clearly, Ingles has more to write in his own. •