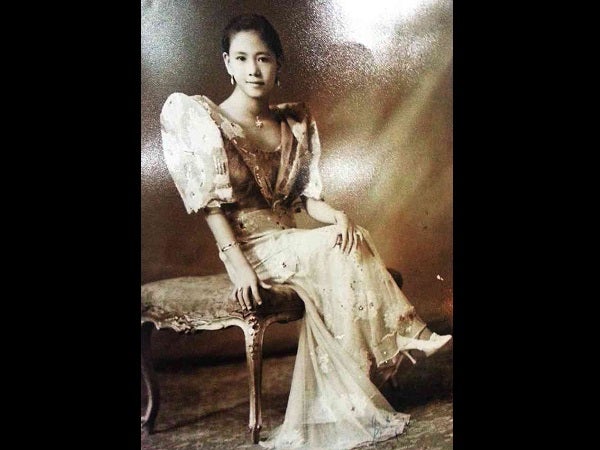 SEPIA photograph of Primitiva Sioson, the author’s mom, shows her as a young woman in the postwar years.

How Mommy said her goodbye to Daddy

IT DIDN’T happen like in the movies or the way you thought it would happen—your father saying a tearful goodbye to your mother at her deathbed, then bringing her to her final resting place, and finally retreating into a period of grief.

Daddy never said goodbye to Mommy because he didn’t know she had gone. She died two Saturdays ago. My brother and I thought it best not to tell him, since we didn’t want any painful emotion to set his health on a downward slope. They’re both 89 years old.

Unlike Daddy, Mommy was a young 89—she was active, feisty, and used to being in charge. She was there by Daddy’s side every day that he was confined in the hospital for pneumonia. This was last November.

Honestly, we thought Daddy would go ahead. No, Mommy did. After she suffered cardiac arrest and flatlined last January 2, she fell into a coma and never emerged from it. So she wasn’t able to say goodbye to him, either.

Daddy’s memory has been on a continuous ebb, apparently the result of a series of silent strokes—typical of a man his age. Although he remembers us and replies when spoken to, it is obvious that his memory doesn’t retain much, if anything at all. He doesn’t make a scene or make a fool of himself. He’s just quiet. He spends the day, sometimes in his rocking chair, his eyes sometimes shut or staring into space. Is it an empty stare, I ask.

Sometimes I tell myself, so that’s how it is to be in one’s twilight days. You’re in a time and space where you can’t be reached most of the time. Sometimes I’m inclined to ask a neurologist what really goes on in the mind of a person at twilight. It is sundown—in time and mental state. Does he rewind the past in his mind, like his busy career and achievements, his short stint in the US, his marriage of more than 50 years, his Citizen Traffic Action (CTA) days on his humongous Honda motorcycle which Mommy couldn’t stand?

Because his memory is practically gone, I was able to get away with alibis (lies, really) about the absence from home of my comatose mom—like I would tell him that Mommy was off again to Malabon or Obando (their hometowns) fixing or buying stuff, or that she was just upstairs scolding a grandson who came home in the wee hours. I was good at covering up her absence—my preemptive strikes before he could wonder, aloud or silently, where his almighty spouse was.

But, as usual, Mommy knew best. She would have it her way, not my way. She had her way of telling Daddy that she had gone on ahead.

The day she died, two Saturdays ago, Daddy couldn’t sleep almost the whole night. He didn’t get much sleep in the succeeding days, either. Then on the eve of Mommy’s burial—a Tuesday night, at seven—he stared at the glass door of his room, and asked his caregiver and another househelp in the room with him, pointing to someone standing at the door, “Umuulan ba? (Is it raining?)” He added, “Bakit siya nakapayong? (Why is she using an umbrella?)”

The caregiver and the help, who have been with us for only less than a year, didn’t know that Mommy’s signature accessory was the umbrella—she couldn’t go anywhere without it because, vain that she was, she didn’t trust the sun that could ruin her fair complexion.

After a few seconds, Daddy, who had kept still, moved his stare towards Mommy’s rocking chair at the foot of his bed. He said, “Nakapasok na siya (she’s come in).”

Then, as the caregiver and our domestic help recalled the moment, the rocking chair began to move slightly, as if someone had been sitting on it.

Daddy kept his gaze on the chair, moving his lips feebly, like in a mumble, as if he was talking to someone. Then his tears fell.

Deep into the night, he just sat still, his teary eyes fixed on the rocking chair. In the meantime, the caregiver and our two household help, in their fright, were sending texts to us as we did our last-night vigil in the funeral home. They were telling us what they were witnessing and wanted to know what to do.

Nothing, we replied. Let Mommy and Daddy be alone.

When we got home in the wee hours, from the funeral home, Daddy had just fallen asleep, his first sound sleep in days.

Early the next morning he woke up, and in a clear voice, instructed someone at the door of his room—of course, there was no one there—“Ang kape at tinapay ko. (My coffee and bread).” That was his first, clear communication in a long time. You see, Mommy’s lifelong routine was to serve Daddy his coffee and pan de sal every morning.

Our househelp, scared once more, had to scramble for his steaming cup of coffee, which Daddy then sipped hurriedly—something he wasn’t supposed to do, given his delicate throat-gastro tract. But then we presumed, as he fixed his stare on the empty door, he didn’t want to wait to be told by Mommy to finish his coffee. He had always dreaded her nagging. And we felt she must have been around him that morning of her funeral.

Mothers are always around, dead or alive. These days, as we sort out and clear away Mommy’s stuff, we—including her grandchildren—realize that Mommy never threw away anything.

Never. Apart from the family photo albums and documents, the list goes on and on. Drugstore receipts. Hardware store receipts from the construction of their home in the ’80s. My brother’s bracelet as a newborn, from the hospital nursery. His first lock of hair. My first huge doll named Pedigree (which my son now says looks like the dolls that come alive in horror flicks), complete with Pedigree’s panty. Pebbles and rocks gathered by my nephew on his first beach trip. My son’s grade school medal. My high school report cards. My brother’s running-away-from-home letter to them (this “running away” didn’t go past dinner, when he got hungry). There’s a lot more stuff.

Mothers never throw away anything. At least, Mommy’s generation didn’t. Ours keeps our stuff on the desktop.

Mommy couldn’t bring all this stuff with her. But I hope she brought the love and gratitude of her family that should last way beyond this lifetime.