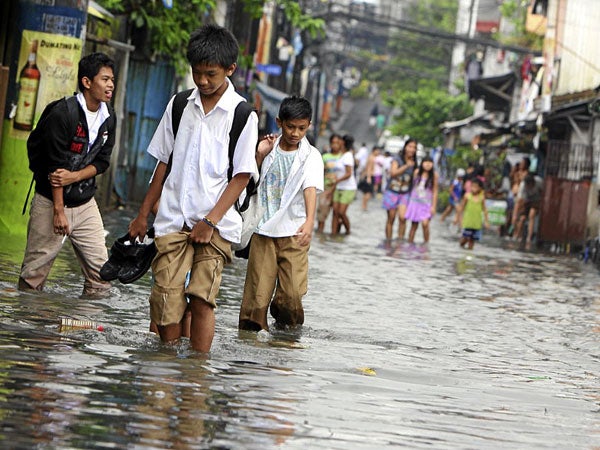 See You in September?

It has happened too many times: Even without a storm signal, heavy rains and sudden flooding force authorities to suspend classes in Metro Manila and other provinces.

As such phenomenon has become as sure as class opening every June, calls to change the school calendar have also become as recurrent.

But amid the effects of a changing climate aggravated by man-made factors, is it really better to start school in September?

Voices from the education community and the Philippine Atmospheric, Geophysical and Astronomical Services Administration (Pagasa) agree that proposals to change the academic cycle would require thorough study.

“We are open to proposals,” said Alberto Muyot, Education Undersecretary for Legal and Legislative Affairs. “We need the expert opinion of Pagasa, the other academic institutions and meteorologists because it’s not just typhoons.  Most of our class suspensions are because of floods and rainfall.”

Already, at least three bills have been filed in Congress to move class opening to September.

Both bills reflect the same intent as Senator Franklin Drilon’s Senate Bill No. 2407, which also seeks a September class opening.

Per Muyot’s count, the proposed school term would cover the summer months of March and April and move graduation to May.

The proposals seek to amend Republic Act No. 7797 of 1994 and the 1987 Administrative Code that fixed the school term from June to March and mandated school days to number at most 220 days.

The current school term provides 22 days of allowance that schools may consume for extra-curricular activities or class suspensions due to weather disturbances, flooding and other calamities.  A total of 180 days has been allotted strictly for academics.

“What’s hard is that since there are laws mandating this [school calendar], we also need a law to amend them,” Muyot said.

“But we have to look closely at the proposal and not just consider typhoons but also floods.  We can no longer use the storm signal as a reason for class suspension because now we normally do that even without a storm signal,” said the official.

Muyot explained that the June-to-March school calendar was designed for good reason: the Holy Week break usually falls just after graduation, while hometown festivities are often scheduled between April and May.

The school break also covers the hottest months, which are not that conducive to learning, said the Education department.

“For many years, there have been proposals to start classes in September, just like in the academic calendar of the United States,” said Muyot. “But there, the hottest months are July and August.”

Here, he added, “our hottest time is April and May and all festivities, religious and social, happen during that time.  In the provinces, it’s harvest time and some parents ask their children to help out.”

DepEd had studied the recurrent September proposal in 2009 and found that 66 percent of respondents across 16 regions were against the proposal while only a third were in favor.

Conducted from August to September in 2009, the DepEd survey revealed that education stakeholders found the heat of summer a tougher weather for students to bear.  To cope with the heat, schools “would need additional ventilation” that would raise the schools’ power consumption.

The country’s climate history does not bode well either for the September proposal.

“Tropical cyclones during the months of October to December are stronger and affect the Visayas,” Servando said.

The southwest monsoon and the intertropical convergence zone are meanwhile known to be active between the months of June to September.

“We have to look at not just rains or floods but also temperature.  Our position is to thoroughly study such move and consider other factors,” said Servando.

For Alliance of Concerned Teachers party-list Representative Antonio Tinio, such proposals represent “an overreaction to a real but quite manageable problem.”

“A buffer of 22 days is provided to allow for suspension of classes due to weather and similar reasons. Our schools have never ever failed to complete the minimum of 180 days due to typhoons.  In other words, our schools have been able to cope with the yearly onslaught of typhoons. There’s no need to amend the school calendar,” Tinio said.

Government, he said, should instead look for solutions to problems that complicate stormy weather, among them clogged or blocked waterways that could cause flooding at the slightest drizzle.

“Government should also improve its weather signaling and public information systems to address the confusion and anxiety brought about by current practices,” added Tinio.

“We do not agree with the proposal because it has no other grounds but the weather conditions, which is not valid because heavy rains and storms come not only during those months but the whole year,” said Basas.