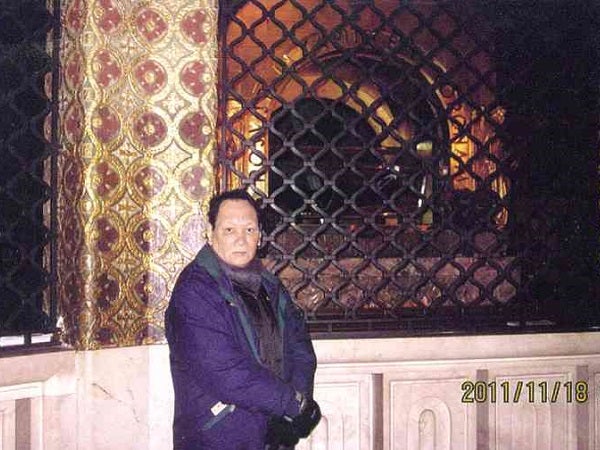 THE LATE Tony Romualdez in front of the uncorrupted body of St. Rita de Cascia in her Basilica in Cascia, Italy

Sunday is the grand fiesta of Nuestra Señora de Guia, patroness of Ermita, thus commemorating the finding of the image on May 19, 1571, by a Spanish soldier when Adelantado Miguel de Legazpi landed in Manila.

After the 6 p.m. Mass, the pilgrim image of the Virgin will be brought in a grand procession around the district. “Recamadero” Tony Adriano made the vestment for the image in immaculate white with real pearls embedded in her dress.  Parish priest Fr. Sanny de Claro leads the celebration today with a concelebrated Mass at 6 p.m.

On Saturday, the patroness was honored with the traditional “bota flores,” which originated during Spanish times when flowers were offered to the Virgen de Guia by the “capitana,” who this year is Kristiana, the granddaughter of former Ambassador to the Vatican Cristina Ponce Enrile.

On remission then from kidney cancer, Tony, with Vickie Castro, made a pilgrimage of thanksgiving in 2001 to the Basilica in Cascia where St. Rita’s body lies incorrupt in her shrine up to this day.

Tony made a Novena to the saint, thinking he had nothing to lose, anyway. He survived his cancer for eight years.

Tony wrote: “I had never felt the power and meaning of every single word in a prayer, until that time when I was praying for my very life. There were many mistakes I made in my life involving my priorities and my family which, if given a chance to rectify them, would give anything to amend them. I prayed to Saint Rita to beseech her intercession with the Lord to heal me of my disease and to grant me more years, so I could reform my ways and lead a good life. With tears rolling down my eyes, I recited the prayers each night. It was a truly humbling experience.

“Today, after eight years of surviving cancer, more than all the medical treatment I have received, it is my firm belief that it was, and still is, the powerful intercession of Saint Rita with the Lord that has kept me alive all these years. More so, I pledged to go on a pilgrimage to honor her shrine in Cascia, as I mustered all my strength to beat the cold weather and travel all the way to Italy to venerate her.”

“The privilege of having made the pilgrimage and personally paying homage to the living remains of Santa Rita leaves a ‘happy feeling’ that lingers to this day,” Tony Romualdez wrote.

“The disease that struck me is nothing compared to the opportunity of truly reforming my life, improving my relations with family and turning away from vices. Eight years ago, I was a lost soul, but after being converted and many firsthand experiences of ‘impossible’ miracles thereafter, I find life easier and more enjoyable in spite of the limitations brought about by my condition.” After eight years of remission, Tony passed away on July 5, 2012.

For her fiesta, the San Agustin Church will hold the Latin Mass at 5:30 p.m. on May 22. Fashion designer Oskar Peralta will decorate her carroza with red roses as he has been doing for 34 years.

After the beautiful solemn fiesta Mass of Nuestra Señora de los Desamparados last May 12, Fr. Willy Benito, OFM, the new parish priest,  told me that he will encourage the visitation of Our Lady to different parishes.

The presence of so many people crowding the church and spilling into the courtyard showed the gratitude of devotees for Our Lady of the Abandoned’s intercession.  Parishes that want to be visited can contact Fr. Willy at 0947-3634040; e-mail request to [email protected]

The Camillian Sisters will celebrate the feast of their foundress, Blessed Maria Domenica Brun Barbantini, on May 22 with Novena Masses and fiesta Mass in their convent on Marcos Highway in Antipolo. Blessed Maria Domenica was born in Lucca, Italy, on Jan. 17, 1789. She married Salvatorre Barbantini at the age of 22, and became a widow six months later. The fruit of their marriage, Lorenzo, died when he was only eight years old. This was a painful experience that led Maria Domenica to a full realization and acceptance of the mysterious plans of God for her.

A woman of strong faith, exceptional courage and extraordinary compassion for others, most especially the sick and the poor, she totally dedicated herself to their service. Maria Domenica died on May 22, 1868. On May 7, 1995, she was beatified by Pope John Paul II.  To obtain prayers to her, please call  Camillian Sisters at 6452463. To inquire about joining the order, e-mail  [email protected]

The family of the late Emma Mayor-Tiongson, 96, will observe 40 days of her passing away on May 24. A concert pianist and a music specialist in the Board of Education in New Jersey, she was a graduate of Sta. Isabel, Philippine Women’s University and Juilliard School of Music, New York. She was a recipient of several awards for outstanding  work  in music training, especially for the Girl Scouts and the 4-H Clubs. Tiongson was from Romblon, Romblon, and was married to Bartolome Tiongson of Malolos, Bulacan. She is survived  by six children—Vic,  Sonny,  Fely Ebarle, Tessie Monsod, Melanie Swalm and Gerry Osias, former president of the PWU Alumni Association.

In her honor, the Prayer Warriors of the Holy Souls will hold a Mass of Remembrance on May 20 at 11 a.m. at the Chapel of the Nativity of the Blessed Virgin Mary at the Cathedral of the Immaculate Conception in Cubao.