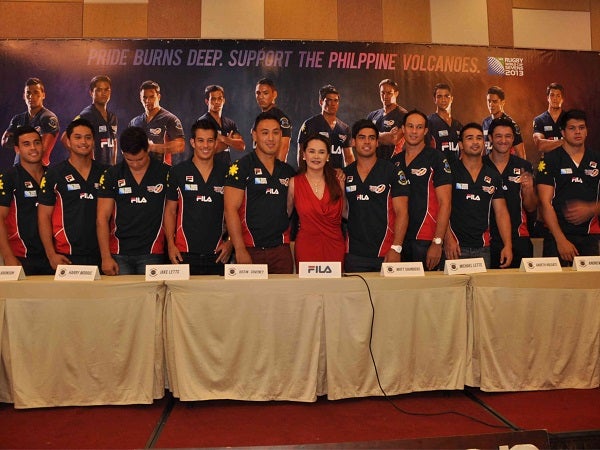 From sports to retail to fashion–truly brighter days ahead

Pinoy pride is at an all-time high. There truly are so many exciting and upbeat events happening in our country. Our economy is on the upswing and our tourism campaigns are paying off. All of us Pinoys are looking forward to brighter days ahead.

Even in sports, we seem to be flying the flag proudly. I recently attended a rugby game between the Philippine Volcanoes and a Hong Kong squad. My hubby Dennis and I had no idea how the game was scored, and the crowd didn’t seem too aware, either. No matter. The cheering of the entire Rizal Memorial stadium showed pride for our kababayan on field.

The Volcanoes fought strong to the end, but the Hong Kong team was bigger and prevailed. I guess in sports like this, size does matter. The important thing to remember is that, win or lose, the Philippines now has a rugby squad heading to the World Cup.

The Philippine National Rugby Union Team, nicknamed the “Volcanoes,” is our official representative to the international rugby union. With numerous gold medals to their name, besting prominent countries in international tournaments, the Volcanoes have now become headliners in Philippine sports.

Today, the Volcanoes are the most successful team in the Asian Five Nations Tournaments, next to Japan. In the past five years, the squad has lost only one match, losing to South Korea in Division One in 2011. Last year, the Volcanoes stormed into the Top 5 with an unbeaten run, besting Chinese-Taipei, Singapore and Sri Lanka in the round-robin series.

But this is a Lifestyle column and not Sports, so let me talk about how the Volcanoes attracted sponsorship that has helped the team no end. Fila, the international sportswear company, is the official sponsor of the Philippine Volcanoes for the 2013 Rugby World Cup Sevens.

Fila has been a household name in sports, since the days of tennis legends Bjorn Borg and Boris Becker. Today, Fila is a global mega-brand for sportswear with specialized lines for running, basketball, racquet sports and golf.

Fila Philippines opened in 1983 and has grown to over 300 stores nationwide under the powerhouse team of Butch and Cris Albert. Exciting new innovations to the sports line have been added, like Everest by Fila, Tiva by Fila, Outdoors by Fila and Freestyle by Fila.

With Fila Philippines’ sponsorship of the Volcanoes in their World Cup bid in Moscow next month, the Fila team is burning with pride and joy as they take the Volcanoes to the international arena.

A send-off formal dinner will be held at the Prince Albert Rotisserie at Hotel Intercontinental next month. We should support our Philippine Volcanoes in our small way by sending positive vibes and happy cheers to the team.

Still in the field of sports, several Philippine triathletes are making waves in the international triathlon scene. My coach Ani de Leon-Brown, the first Filipino woman to qualify for the prestigious Kona Ironman race, has once again won gold for the Philippines in the recent Challenge Taiwan Ironman.

Coach Ani is also the brand ambassador of Rudy Project. At their cool store in Serendra at the Fort, Ani and I have an in-store billboard wearing Rudy Project helmets, sunglasses and biking apparel.

Second to fourth places went to Ricky Artigas, Lyn Tomas and Jerome Gonzalvo. At the awarding, Lyn brought the latest issue of Runner’s World, where I am featured in a piece written by Women’s Health editor Lara Parpan. I gladly autographed her copy.

The Swatch Show Your Style ID contest winner was also awarded that same day to Michelle Arville, a Swatch collector for many years now. She won a grand prize of a limited-edition Swatch x Birdhead.

Young boy Julian Zagala was the People’s choice winner for the Swatch contest. His parents are both runners themselves, and Julian is starting to join fun runs this year.

Swatch grand dame Virgie Ramos just turned a year wiser yesterday, and we wish her continued success and a healthy lifestyle to enjoy many more years ahead. I am excited to be working with her again on another charity project coming very soon.

My web manager Ian Galliguez (www.BusinessOnline.ph) has done a wonderful job at keep my website current and full of exciting promos. Keep logged in for future contests.

Sports like biking and running are increasing their popularity, with so many new brands being launched and new shops opening. At the ribbon cutting of Rustan’s Evia, a bike ride was held as part of the opening ceremonies of the new supermarket along Daang Hari, Las Piñas.

As an endorser of Breeze laundry detergent, I was invited to join the ride and be the guest of honor, along with James and Phil Younghusband and Sen. Manny Villar. It was fun to get on my new Specialized Shiv bike and get on the road again.

At the opening were Rustan’s Donnie Tantoco and Frances Yu, part of the crack team that is expanding Rustan’s numerous supermarkets around the country. Frances is also a biker, but was so busy making sure the launch was a success that she missed out on the bike ride.

I cannot end this column without special birthday wishes to my fave designer, Rajo Laurel, who celebrates his natal day today. We will be all cheering for him tonight as he celebrates his 20th year in the fashion industry with a Metro Gala show. Indeed, there is so much to celebrate in the Philippines.