Punching his way out of poverty | Inquirer Lifestyle ❮ ❯ 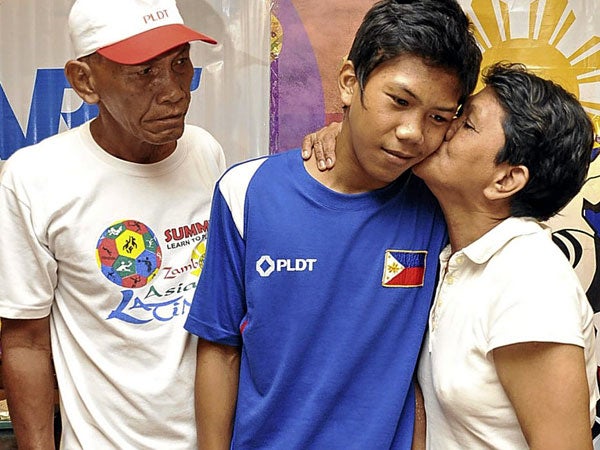 The good son: Marcial with parents Eulalio and Carmelita. Photographs by Richard Reyes

Punching his way out of poverty

Like most aspiring pugilists, young boxing standout Eumir Felix Marcial wants to use the sweet science as a way of escaping the claws of poverty.

Speaking in whispers, the 15-year-old Marcial punched his way to international boxing stardom after gifting the country with its first-ever gold medal in the 2nd World Junior Boxing Championship of the International Boxing Association (AIBA) at Astana, Kazakhstan in July this year.

And Marcial, whose love for boxing started during his elementary days in Brgy.  Lunzuran in Zamboanga City, isn’t about to stop scaling greater heights.

“I went into boxing because I’ve heard a lot of stories about champion boxers helping their families escape poverty. I plan to do the same,” said Marcial in halting Filipino, as his native tongue is Chabacano.

Though he looked bewildered when the media peppered him with questions during a Philippine Sportswriters Association forum, Marcial is aware of the hard grind ahead. Despite his meteoric rise, which took some people by surprise, the young boxer knows he has a lot to learn.

“The secrets of my sucess aren’t secrets at all. I seek the guidance of the Lord, I work hard and I follow my coaches,” said Marcial.

“He is a very good boy. He loves to train and follows instructions to the letter,” Brin said.

Nevertheless, Brin noted that Marcial, who gained the admiration of AIBA president Ching-Kuo Wu of China-Taipei during the slugfest, needs to improve on his jabs, footwork and power.

“Eumir still lacks experience. But I am confident that with his attitude, there’s no way but up,” said Brin.

Truth to tell, Marcial surpassed himself by winning the country’s first gold in the event that started in 2001.

Hardly given a second look before the trip, Marcial, who was with  the PLDT-Smart boxing team, outslugged Turkish Cengiz Onat in the light-bantamweight finals.

Before besting Onat, Marcial created a buzz after decking Eduard Vaha of Belarus in the first round in the semis. He also beat the favored Armenian Henrik Hovannisyan and Azerbaijan’s Nasraddin Mammadov in the first two rounds.

By winning the gold, Marcial got a whopping P300,000 incentive from PLDT-Smart chairman and sports godfather Manny V. Pangilinan.

Marcial’s parents, Eulalio, a barangay (village) policeman, and homemaker Carmelita, joined him during the awarding ceremony. Ed Picson, ABAP executive director, sent the couple plane tickets so they could join their son in Manila.

While the 61-year-old Eulalio found it hard to speak in Tagalog, his 51-year-old wife gamely answered the media’s questions.

“Our house was demolished in 2008,” she recounted. “We belong to the urban poor and there was a land dispute, but we harbor no ill feelings because we know that we can recover.”

With their son now in the national training team in Baguio City, the Marcials live with their four other children in a small house. Part of Eumir’s incentive will go to the repairs of their own house.

“This is God’s blessing to us,” said Carmelita, who admitted to having had sleepless nights when her son left for Manila enroute to Baguio to join the national training pool.

“We were really nervous when he left Zamboanga. He’s young but he’s so determined to train with the national team,” Carmelita said.

But life started changing for the better since their son sent them P1,000, and then P2,700, as part of his allowance from the training pool.

“He told me that he is saving part of his allowance so he can send us money,” said Marcial’s mother proudly.

Marcial has been honing his boxing skills under his coach – his own father, Eulalio. A disiplinarian, Eulalio would prod the young Marcial to jog early mornings before going to class. “He gets really tired but I know he wants to train,” said Carmelita.

Marcial created a buzz when he joined the Golpe Golpe sa Barangay sponsored by Zamboanga City Representative Erbie Fabian. Coached by Ambrocio Maquilan and Popie Cartil, the young boy gained the attention of the Amateur Boxing Association when he won the gold in the National Open in Cagayan de Oro City.  Previously, he also triumphed in Palawan.

“We knew that he had the makings of a champion boxer,” said national coach Pat Gaspi.

This early, Gaspi is proving to be right on target.